“Darker Still” is a confrontational album with mystical moments occasionally, while it occasionally borders on being a power chord melange. But there is enough variety to keep anyone’s interest. Parkway Drive’s most recent release will help them maintain their position as one of metal’s top live acts. They are already well-known for their frantic live performances. 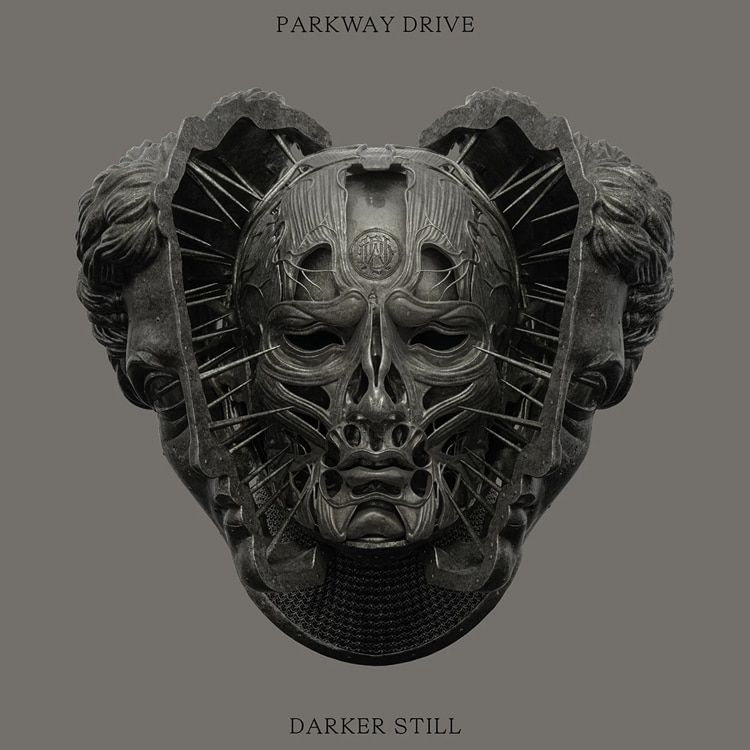 A dark image of a perforated skeleton-esque head extends to two other pretty complex structures on both sides of its head, attached to it by multiple threads. Somehow the complex structures appear to be an enclosure that can completely hide the head when or if they come together. From the looks of it, they opened up to reveal the head. Darker Still indeed.

The album’s opening track, “Ground Zero,” has beautiful vocals from Winston before abruptly exploding into a powerful, driving guitar riff. Winston sings the catchy chorus, “The weight that weighs you down, let it go,” which is followed by swirling guitar effects and a confrontational, violent vocal from McCall imploring, “Burn it all away.” The self-reflection concept of Glitch is continued with the massive power chord-driven musical background to more combative vocals. “Help me take this pain away; Sleep is now my enemy,” the melodious chorus begs.

One of the standout moments on the album is found in “The Greatest Fear.” Soon after an ethereal choral introduction, a strong guitar riff with interlaced soloing appears in the chorus. In order to create an ethereal heavy metal hymn, the bridge includes additional choral vocalizations, “In death we sing the hymns of nevermore.”

The album’s direction changes with the title track, “Darker Still,” which begins with a softly played acoustic guitar and lyrical whistling. With thoughtful lyrics that push it into ballad territory, the song has the record’s softest vocal performance. The powerful power-chord theme is carried on in “Imperial Heretic,” along with an addicting solo riff, an aggressive vocal style, and the first line, “Watch out!”

The album changes course once more with “If A God Can Bleed,” a spoken-word song with ominous lyrics like “Fat little piggy with his head on the block” and a soft piano accompaniment. In “Soul Bleach,” the album returns to the heavier, more recognizable sound that was created throughout the first half of the album; combative vocals are paired with lyrics like “A little trust is a dangerous thing,” carrying on earlier themes of personal struggles.

“We are all but strangers, in a stranger world,” a murmured vocal adds to the magical but brief gift of “Stranger,” the album’s shortest track at 51 seconds. Before “From the Heart of Darkness” finishes the album on a gloomy note, the band returns to their heavy footing on the second-to-last track, “Land of the Lost,” which is noted for its guitar solo. Real sombre lines such as; “There’s a war going on inside, nobody’s safe from” and “I saw myself so broken that I struggled to reconcile” are driven on by a more defiant and resilient riff to close the LP on an even more combative note.

This is not a record about depression and darkness, it is an album about dealing with that emotion and celebrating getting through it.

Load more
Tags
Parkway Drive
Ikedichim Chibundu Follow on Twitter September 9, 2022Last Updated: September 9, 2022
Check Also
Close
Load more
Back to top button
Close
We use cookies on our website to give you the most relevant experience by remembering your preferences and repeat visits. By clicking “Accept”, you consent to the use of ALL the cookies. In case of sale of your personal information, you may opt out by using the link .
Cookie settingsACCEPT
Manage consent