Marx’s most recent album, “Songwriter,” finds this gifted artist paying homage to and exploring the various genres he has worked in. The 20-track LP has been divided into four sections with the labels “Pop,” “Rock,” “Country,” and “Ballads.” The genre distinctions and Marx’s motivations for completing this ambitious endeavour are self-explanatory.

Keith Urban, Darius Rucker, Chris Daughtry, David Hodges, Randy Houser, Burt Bacharach, and Richard Page are just a few of the multi-genre artists who contributed to this vast production. Marx participates in the construction of each song, but it is these partners who have added a unique touch and helped the songs take on their proper forms. 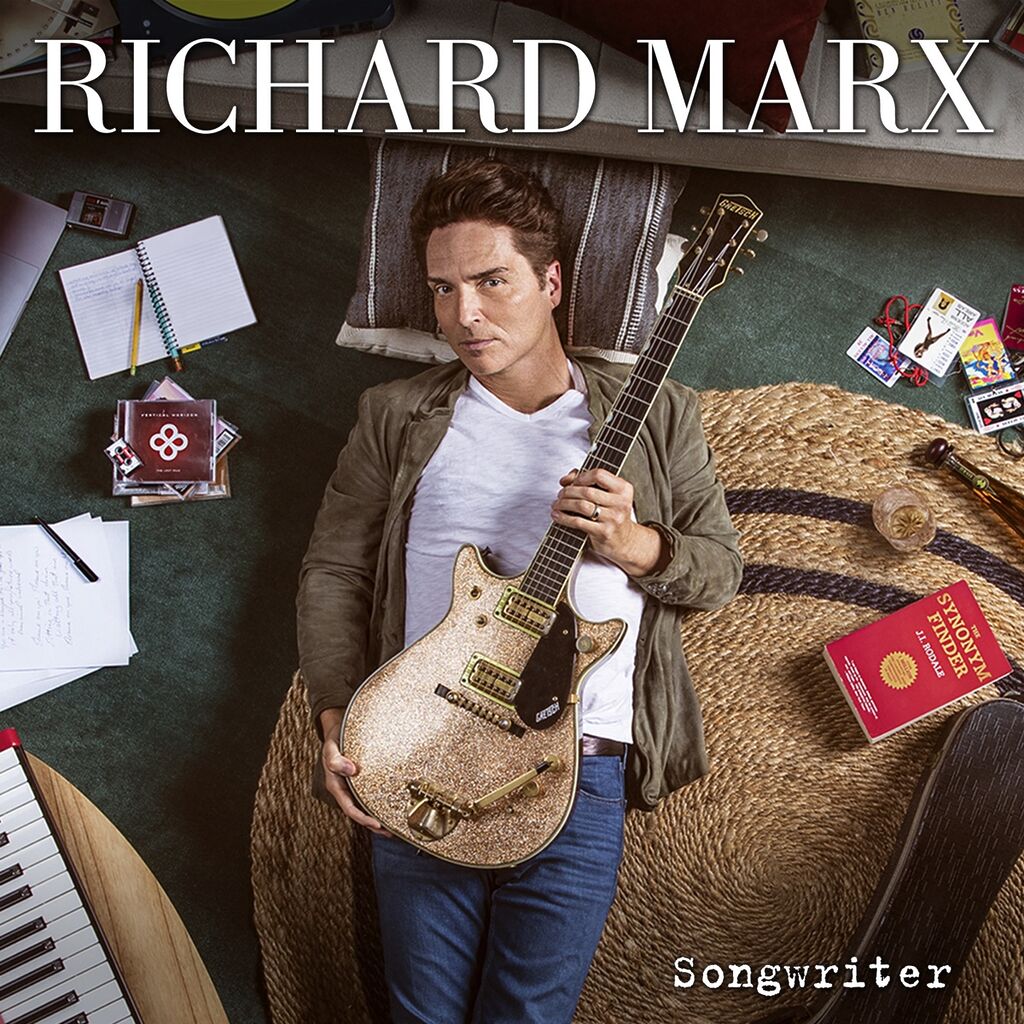 Richard Marx seems to be in his element as he strikes a pose for the cam surrounded by his music tools and equipments that include guitars, a keyboard, a cassette player, and writing materials that aid with sharpening his skills as a superb Songwriter.

Songs in the “Pop” category range from mature, adult Pop that meets AOR to disco-tinged selections. With its driving pace, keys, and production elements, Marx’s current single “Same Heartbreak, Different Day” harkens back to their 80s heyday, while “Anything” is a polished guitar-based heartbreak song with an anthemic undercurrent. The disco influence is present in “Only a Memory,” but the standout track for this section of the album is “Moscow Calling.” A very upbeat, European-sounding song is supported by heavy beats.

The introduction of the Rock quarter is a little unexpected given the polished, silky Pop of the first five songs. Quite the pivot. Marx’s vocals have a grizzled snarl to them, the guitars are ramped up, and the drums are louder.

The chorus of “Shame On You” has a distinct Evanescence vibe, and the post-chorus riffage is very delightful and perfect for headbangers! The Vertical Horizon song “My Love, My Enemy,” which Matt Scannell and I co-wrote, is drenched in massive voices, large harmonies, and massive backing vocals. Marx’s vocals on this song are dripping with a sarcastic smirk that perfectly complements the song. While ‘We Are Not Alone’ begins in classic Sum41 fashion with a monster riff from the early 2000s, it develops into an extended chorus about resiliency and solidarity.

Thankfully, the songs in the Country area are exactly as wonderful as their Rock counterparts, so when that changeover takes place, there is absolutely no drop in quality.

The song “Everything I’ve Got” has a somewhat southern guitar tone and cleaner vocals than Marx used on the rock songs, but it would have passed for Hard Rock and was played frequently on Headbanger’s Ball back in the day. Additionally, it serves as a reminder to those of us who have lived through the last five decades that the distinctions between genres and styles have clearly become more hazy recently.

A catchy chorus and a guitar line that sounds a lot like Florida Georgia Line’s “Cruise” can be heard in “Misery Loves Company,” which Marx and his son Lucas co-wrote. The melody and structure of “One Day Longer,” which Keith Urban co-wrote, have a distinctly Urban-esque cadence. A moodier, darker tune that seems like it may be the sister song to Marx’s very own classic hit, “Hazard,” is “We Had It All,” which contrasts with the chugging guitars and sadness of “Breaking My Heart.” All of these songs are excellent. superbly constructed Infectious.

The final part of the album is made up entirely of ballads, including the Burt Bacharach and co-written song “Always,” as well as the songs “Maybe,” “Never After,” “Still in My Heart,” and “As If We’ll Never Love Again.”

“Songwriter” is a bold and ambitious undertaking that could only have been accomplished by a writer with Richard Marx’s level of expertise, experience, and familiarity with the workings of the music business. This project is a triumph! An accomplishment that should be valued for what it is: a victory of vision and execution.

Details of that information has not been made available.

Load more
Tags
Richard Marx
Ikedichim Chibundu Follow on Twitter September 30, 2022Last Updated: September 30, 2022
Check Also
Close
Back to top button
Close
We use cookies on our website to give you the most relevant experience by remembering your preferences and repeat visits. By clicking “Accept”, you consent to the use of ALL the cookies. In case of sale of your personal information, you may opt out by using the link .
Cookie settingsACCEPT
Manage consent