Richer Than I Ever Been

Miami rapper William Leonard Roberts II, long famous by his adopted stage name Rick Ross, has always played with the themes of wealth and accomplishment in his music. It’s a return to old habits, then, in a sense, as he unleashes a new body of work titled “Richer Than I Ever Been” album.

The songster has always been ambitious in his choices of album titles. So the latest title is nothing surprising. And he cannot be begrudged the choice of the title either. He’s come a long way, and he’s actually richer than he’s ever been.

In “Richer Than I Ever Been,” his eleventh studio album to date, the Miami rapper serves a sumptuous vermicelli stew of his experiences and it’s hard not to love the result.

While the project as a whole rings rap, it opens itself to lovers of good music and a good time generally. Ultimately, whatever your musical leaning, you should find something to take home from the pot.

In an era where most artistes elect to drown their listeners in many tracks – most likely to increase streaming stats – Rick Ross elected to limit himself to just 12 tracks – a compact affair we should say. We do not quarrel with that.

Rick Ross’s decision not to have a bloated tracklist worked admirably in his favor. The compilation is tight, with just 12 tracks, beginning with the Willie Falcon- and The-Dream-featured “Little Havana” and ending with “Hella Smoke,” which featured Wiz Khalifa.

Stuck between both tracks are numbers like  “The Pulitzer”, “Rapper Estates”, “Marathon”, “Warm Words in a Cold World”, “Wiggle” (featuring DreamDoll)”, and we’re still counting. 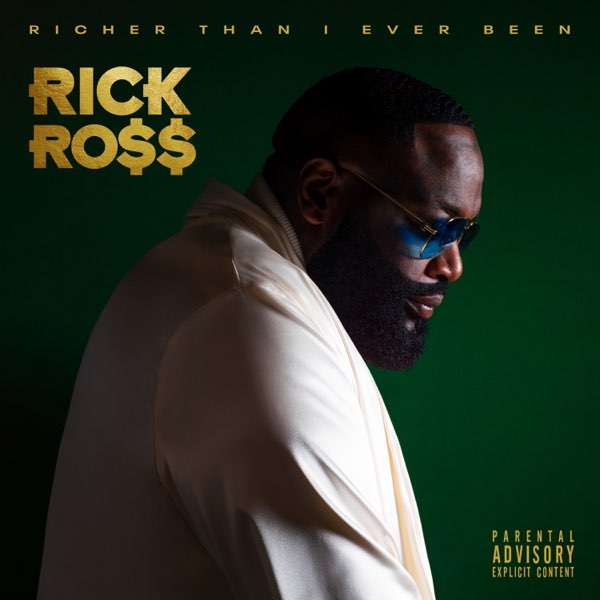 A mixed bag best describes the features list of Rick Ross’s album. For this project, he’d worked with the likes of Wiz Khalifa, The-Dream, Wale, Willie Falcon, Future, and Benny the Butcher.

Other guests include 21 Savage, Blxst, Youngeen Ace, Jazmine Sullivan, and Major Nine. The list might be mixed but the artistes who made the cur might be grouped into two: new voices and oldies he’d worked with earlier in his career.

The title of the album mirrors part of the themes. Money – you may say material success – takes key spots in the theme bag. Not surprisingly, he begins the first song on the project with something about the cheddar – and a little about family.

There’s not much to quarrel about the production of the project. Timbaland, boi-1da,    StreetRunner, Azzouz, AraabMuzik, Black Metaphor, Carnage, Infamous, DJ Toomp, and a couple of others handled the production.

Rick Ross’ name may not have popped among the producers, but his influence on the finished product is hard to miss

“Richer Than I Ever Been” album glitters with several fine numbers. Admittedly, we’re not big fans of all of them. That notwithstanding, a few of these songs ignite the soul.

The Blxst-featured “Made It Out Alive” is one such number. Written by Robert, Matthew BurdetteDarryl and McCorkell, this song is a celebration of Ross’ movement from nothing to something, nobody to one of the key voices in American rap. Here you meet the successful hustler.

Another memorable number from this compilation is “Wiggle” (track number 6), which featured DreamDoll. To listen to that track is to realize it wasn’t named by accident. “Wiggle” is a fierce tune that will easily get the party started and get you to wiggle your waist, too.

The 11th and eponymous track of the project cannot be missed as well. There’s a fierce note of optimism to that number, a note that will make the hustler out there realize that the hustle pays ultimately. Ross is a sterling example.

“Richer Than I Ever Been” is an album of undeniable musical appeal and therefore a project to embrace – whether you’re into raps or not. Rick Ross not only promised a great musical experience with the album, but he also delivers just that.

Right from the outset, you find an artiste supremely confident in his gift and eager to entertain. He does that effortlessly, creating a musical experience that’s pretty hard to shake off.

“Richer Than I Ever Been” is a project to have on your playlist. It may well serve as an antidote to boredom. No qualms.

Load more
Tags
Rick Ross
John Anusie Follow on Twitter January 10, 2022Last Updated: March 31, 2022
Check Also
Close
Back to top button
Close
We use cookies on our website to give you the most relevant experience by remembering your preferences and repeat visits. By clicking “Accept”, you consent to the use of ALL the cookies. In case of sale of your personal information, you may opt out by using the link .
Cookie settingsACCEPT
Manage consent