“emails i can’t send”, Sabrina Carpenter’s much anticipated fifth full-length album, features very personal songwriting and palpably passionate performances. Carpenter presents her most exposed work to date with “skinny dipping,” “Fast Times,” and her most recent release, “Vicious,” a nineties pop-rock song-craft with an exhilarating dosage of 21st-century feelings. Carpenter swaps out the Disney-girl chip in her new music and lets her uncensored thoughts run wild, even if it puts her in a position where she will be condemned. 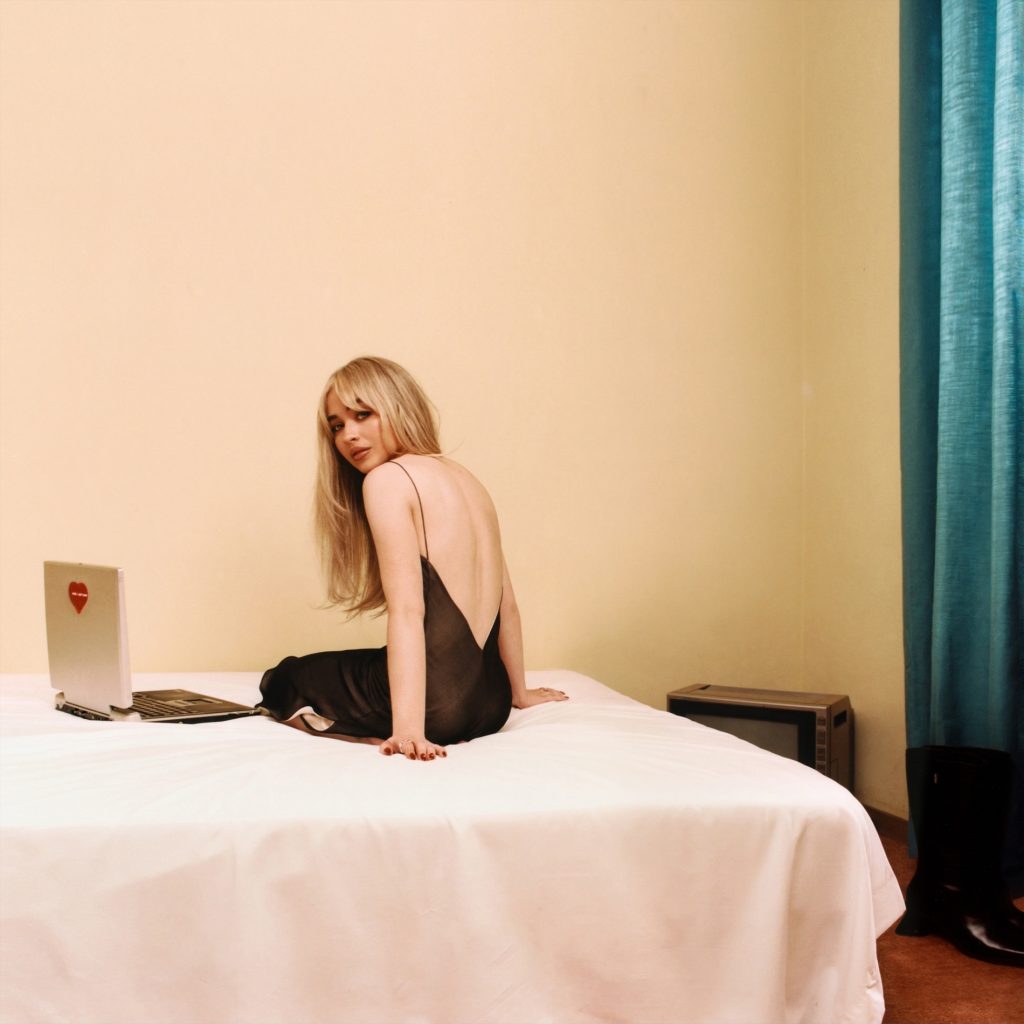 Showing some skin, Sabrina, in her black dress, can be seen sitting before an open laptop on a bed that is neatly covered with white sheets, set in a bedroom scene judging from the ambience of the room and what can be found in the background, like the long, faded-green curtains behind her and the box television resting on the floor at the corner of the room just next to the black, long boots that are barely making contact with the thick, flowing curtains.

The songstress stares back at the camera but doesn’t appear shy or embarrassed. If anything, that is precisely where she wants to steer the public eye to – her bedroom, which can also stand as a metaphor for her personal, private life and affairs. She seems comfortable enough to let the world in, which also portrays her vulnerability in “emails i can’t send.”

With soft piano keys starting off the first song on the album, “emails i can’t send” also shares the same name as the project. There’s a lot of regret going on in the song lyrics. She wishes she didn’t even come to meet this person she now loathes, many thanks to their lies and deceit. Then comes “Vicious”, where she sings about how a former love interest switches up on her, completely changing from the person that used to love her to a total stranger who now pretends the love they shared never existed, to begin with—great pop-synth vibes.

The bright, bouncy “Read your Mind” tells the tale of a ‘casual friend’ that wants more than just friendship but does not want the ‘burden’ of a relationship, steadily blowing hot and cold, which irks the singer. In “Tornado Warnings”, she narrates her low-key obsession with a person unsuitable for her. She even mentions lying to her therapist about this person.

She gets pretty candid on “because i liked a boy”, where she sings about how she got trolled by the public all because she liked a boy like she is not allowed to like or roll with whoever she pleases. Even while she sings about past experiences, her voice still has an underlying tone of frustration. In “Already Over”, she seeks closure from a failed relationship when the other party had already moved on. Sad.

On “how many things”, we can hear her reminisce about a past relationship which she appears to miss a lot, while “bet u wanna” kinda swings in the opposite direction where someone she was once involved with now wants her back exactly when it’s too late. Fusing some R&B-esque vibe into “Nonsense”, she gushes endlessly about a crush.

“Fast Times” harmoniously touches on the perks of being a star and how that now affects her love life. Closing out with “skinny dipping”, “Bad for Business”, and “decode”, Sabrina takes us through the smooth and rough patches of her private dealings with her past lover(s). Altogether, thirteen emotional and very revealing songs with zero features.

The album covers heartbreak, the impressions, and occasionally unkind assumptions she had to contend with as fans turned her into a secondary antagonist in a Disney actor love triangle with Olivia Rodrigo and Joshua Bassett. The album depicts the singer in a vulnerable state as she faces her emotions and accepts that she has no control over what others think of her and never has.