The vocalist on the Circle’s most recent album, “Crazy Times,” blends more naturally with his comrades than he does to the point that he deliberately plays off of them. That’s a praise; you could consider Space Between, the Circle’s album from 2019 as something of a continuation of (and an upgrade on) this one.

“Crazy Times” has a number of tracks that, if anything, are more similar to Montrose’s “Bad Motor Scooter,” which appeared on the band’s first two albums, than they are to any of Hagar’s other solo endeavors or, more specifically, his work with Van Halen. This entails challenging music with a range of tempos that is both marginally less accessible and significantly less pop-friendly than his best-known work. That exchange will be deemed to be excellent by many listeners. 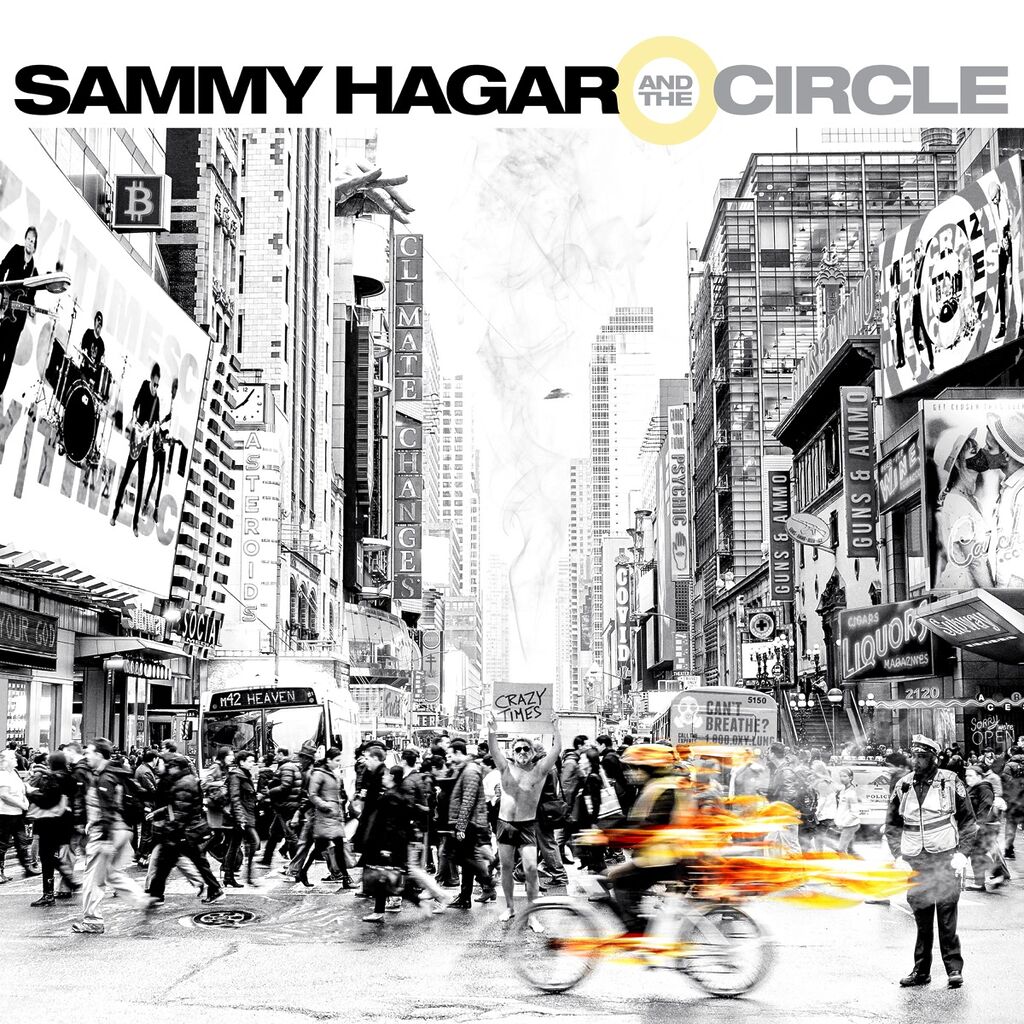 Tall buildings, street billboards,  a traffic warden, a random biker, and regular, everyday people going about their different businesses in clusters, bypassing each other and moving in different directions on foot. That description viewed in one shot as illustrated on this cover art almost has a rather chaotic shade to it, which pretty much lends to the meaning that we exist in these Crazy Times.

The album’s first track, “Slow Drain,” which features Hagar lamenting the condition of things while “watching the world go down,” is driven by Bonham. In this challenging album opening, he pushes the weight of both his vocals and the music toward ’90s grunge. Although there is a melody there, the strength of the musicians’ playing, particularly Bonham’s, is what sets this and the majority of the 10 songs here apart.

For the most part, album producer Cobb succeeds in his task of controlling Hagar’s baser tendencies. The throwaway Costello cover would work better as a B-side, and “Funky Feng Shui” is as groan-inducing as its name suggests. However, he primarily performs rock ‘n’ roll that sounds not all that dissimilar from the 1980s, which was the decade that treated him the best. But he still moves across the decades, dipping into Elvis Costello’s late-’70s discography for a volume-enhanced “Pump It Up” and adapting a bit to contemporary technology in the buzzing “Crazy Times.”

The title track of Crazy Times makes good use of Cobb’s gravel-strewn affiliation with country outlaw Chris Stapleton, while “You Get What You Pay For” is probably as near as Hagar has been to his Van Halen days since he quit the band. The slower-paced “Father Time” and “Be Still,” which reflect on simpler times, are the two songs where the producer successfully drags Hagar into his universe. Hagar reflects on his life, his choices, and the ups and downs of the life he still leads despite all the setbacks in these songs.

In addition to providing a strong bottom, harmony singer Michael Anthony also contributes his distinctive high background vocals on several of the songs on this album, most notably “Feed Your Head.” Aside from a brief burst during “You Get What You Pay For,” Anthony’s background singing on this album is more atmospheric, sounding more like its own instrument than just timely harmonies.

“Crazy Times” demonstrates Hagar’s maturing, which he attained in his mid-70s, and how he is getting better with age. It may also be said that to be a pandemic record, or at the very least one that reflects the times we live in as we attempt to make sense of the last few years, and Hagar also makes a sideways, uncommitted attempt to address that.

For their latest album, Sammy Hagar and The Circle collaborated with Nashville producer, Dave Cobb.

Load more
Tags
Sammy Hagar and The Circle
Ikedichim Chibundu Follow on Twitter October 3, 2022Last Updated: October 3, 2022
Check Also
Close
Back to top button
Close
We use cookies on our website to give you the most relevant experience by remembering your preferences and repeat visits. By clicking “Accept”, you consent to the use of ALL the cookies. In case of sale of your personal information, you may opt out by using the link .
Cookie settingsACCEPT
Manage consent