Beautifully crafted pop album, “And In the Darkness, Hearts Aglow,” addresses the unease that pervades the world. The new record is a magnificent response to the problems of the present society, yet Mering lacks solutions. Mering fuses piano-driven pop tunes with magnificent experimentalism over the course of its ten tracks, two of which are interludes, including the string-quartet “Hearts Aglow” preceding “And In the Darkness”, defying the closing-in that has appeared to rule the 2020s. 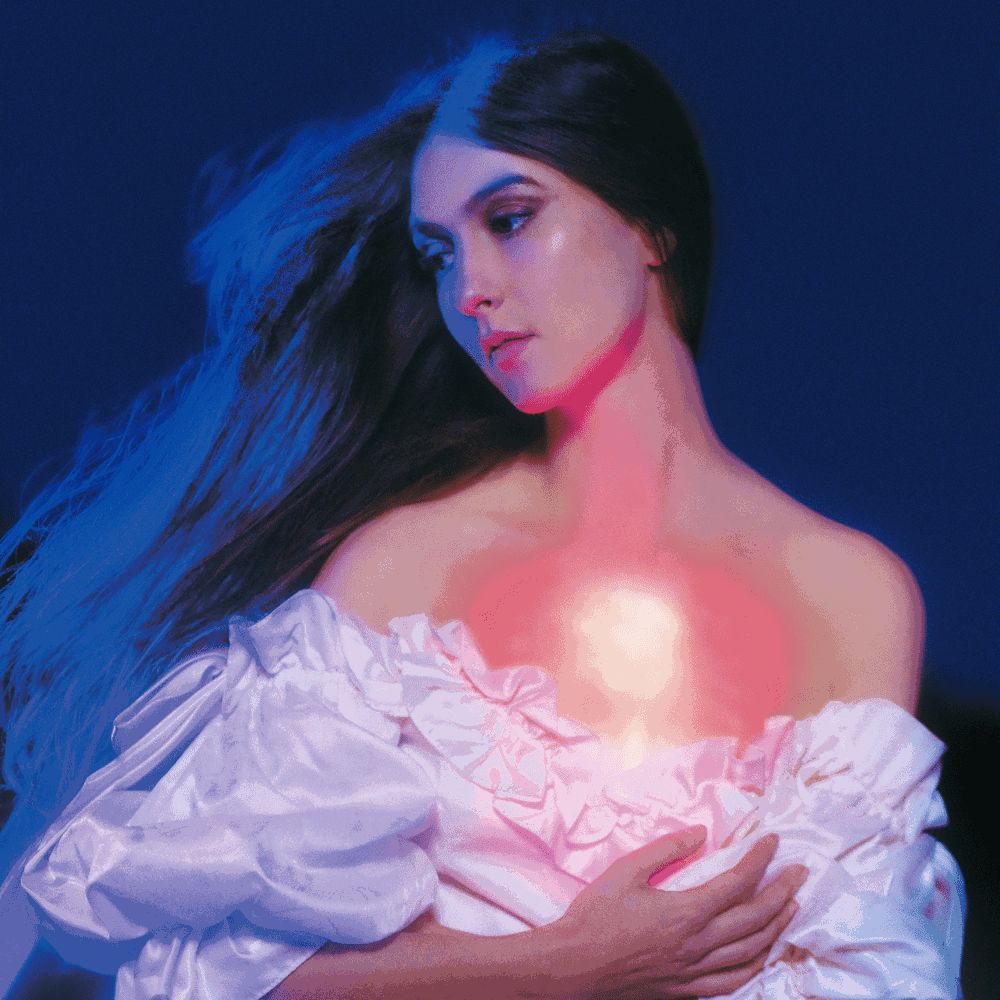 Mering, in her impeccable silky white gown, holds her chest and tilts her head sideways, the wind swaying her hair in that direction. But the highlight of this album cover is the bright glow emanating from inside her chest where a light-source of some sort appears to be situated, clearly depicting and bringing life to the album title.

The mission statement for Hearts Aglow can be found in the album’s opening track, “It’s Not Just Me, It’s Everybody,” which acknowledges that personal hurt and disappointment occasionally buzz at a frequency that we all experience and that, ironically, being surrounded by people can be just as isolating as being cut off from everyone. Later in the song, she croons, “Mercy is the only cure for being so lonely,” and that is the message she wants to convey across the entire album.

“Children of the Empire,” the album’s second track, is a stormer with piano that features Mering giving a speech to her generation. Mering tells us that she accepts that life is difficult today but also emphasizes that it is a mess that we have created for ourselves. The song is driven by the tension between wanting to run away and acknowledging guilt. It begins with Beach Boys “bah bah bah”s and quickly gains momentum as it circles back to the finger-snapping chorus, turning it into her most rowdy song to date.

On “Hearts Aglow,” she speaks to the general public of bereaved people once more, but she does so in a tone that is more personal and comforting. It is as though she is speaking from the collective heart as she laments, “‘Cause it’s been a death march / The whole planet is crumbling,” over the accompaniment of softly sighing organ chords. She looks for someone to dance with, to help her start her life with, and to sit “up on the ferris wheel at night” with despite facing the darkness head-on. Mering’s voice and melodic acumen cut through this gloom. As always, she creates harmony out of discord and leads her listeners on the same transforming trip.

The breakup song “Grapevine” uses that small amount of hurt to create a lofty but sympathetic meditation on the state of the world and the fractured nature of humanity. There are many doomsday undertones in it, which are emphasized by ringing tubular bells, ominous synthesizer sounds, and an echoing ambiance.

Another heartbreaker, “Twin Flame,” forgoes the guitar and strings in favor of the drum machine and organ, and in this private setting Mering relaxes a little more. She can let her inner feelings breathe thanks to the simple setup, which causes her to fluctuate between profound truths and pure misery. An undeniable groove flavors the melancholy as a guitar lick weaves its way through the background, hinting at the singer’s lingering yearning and passion.

The most amazing deviation is “God Turn Me Into A Flower,” a six-minute meditation on existence that is accompanied by delicate but glittering synth by Daniel Lopatin. Mering, who gave up her Christian background when she was a teenager, has recently leaned toward Buddhism, and this is the most obvious result of her studies.

Mering gives thoughts on her own struggles throughout the majority of Hearts Aglow, but she frequently has a captivating flair for zooming out to put them in the context of the wider picture.

Load more
Tags
Weyes Blood
Ikedichim Chibundu Follow on Twitter November 18, 2022Last Updated: November 18, 2022
Check Also
Close
Back to top button
Close
We use cookies on our website to give you the most relevant experience by remembering your preferences and repeat visits. By clicking “Accept”, you consent to the use of ALL the cookies. In case of sale of your personal information, you may opt out by using the link .
Cookie settingsACCEPT
Manage consent