The fittingly named “More Love, Less Ego” continues “Made In Lagos’s” aural departure from the upbeat sound of Wizkid’s first two albums. The 32-year-old continues to demonstrate his skill at fusing melodious genres on the 13-track album. While recognizable themes from the South Africa-born, house music-indebted Amapiano sound can also be heard throughout the album, Wizkid’s version of Afro-pop also incorporates elements of funky jazz and R&B.

Given Wizkid’s prominent position, it is not surprising that “More Love, Less Ego” has a stellar guest list. He surprises everyone by working with Don Toliver, as well as his frequent collaborator Skepta and budding Afro-pop artist, Ayra Starr. A big applause and flowers to Wiz for creating songs that are equally powerful and intelligent. 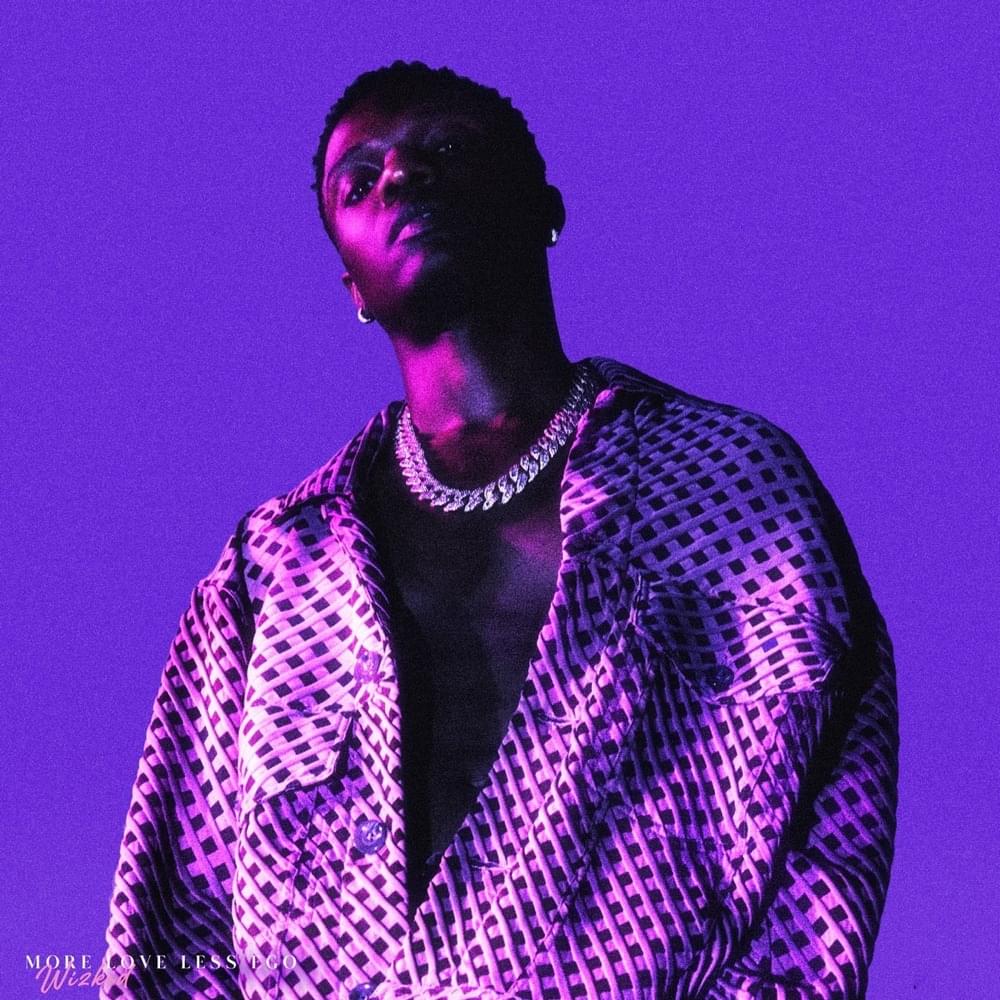 Wiz can be seen in all-purple background wearing a free long-sleeve jacket, unbuttoned, as he tilts his head (similar to his last album cover) to pose for the shot. His iced-out chain and small earrings are hard to miss. He seems pretty chill and laid-back in his demeanor which is about the same energy he brought on “More Love, Less Ego.”

A pounding thud and lucid keys power the seductive “Bad to Me.” The song also has an energizing atmosphere and was created for a late-night slow grind. “This kind love, yeah/Wey dey make me want more,” Wizkid sings, sincerely and passionately. “Wow,” which features Skepta and fellow Nigerian artist, Naira Marley, is all about club stunting. Wizkid is seen quickly securing a one-night stand in the song, which has a smooth stop-motion bounce: “G’yal, I want go where you want go/And I want tell you tings wey you want know.” The music is so alluring that you could be playing it loudly through your headphones while going to do some laundry and yet feel like you’re walking the Met Gala red carpet.

The album’s seamless blending of upbeat music and motivational lyrics is another strength. The Lagos native sings about battling demons and exuding “the right energy” on “2 Sugar, ” which features Ayra Starr who totally bodies her rendition, providing a bounce and flow with the chorus that is in fine sync with the crisp synths and booming snares.

Similar to the previous track, “Everyday,” which begins with a speech by Maya Angelou, is about joyous tenacity. Its alluring hook ought to serve as a daily affirmation. As he sings about being high off life, he highlights his low-key lifestyle and how he loves to still catch his cruise despite life’s many problems.

The beat of “Special” never really gets to flourish, but the song still feels incredibly gratifying. Don Toliver and Wizkid use soulful and subtle vocals in it to inform the women in their separate relationships that their bodies are making them crazy. This song’s speed and unadulterated rawness will guarantee your enjoyment.

“Deep” is one silky smooth, open, and romantic tune. Wizkid, not exactly desirous for love, is honest about wanting to do the nasty and the nasty alone with his love interest over a rhythm with a wicked tempo and seductive feels that would definitely have the ladies swooning. The song has a captivating hook and catchy lyrics that you’ll adore.

It’s really sweet how “Frames (Who’s Gonna Know’s)” production captivates you with a sound that feels ethnic, sunny, vibrant, and upbeat. Wiz uses a soothing voice performance to reassure his girlfriend that he is fully committed to her happiness. Overall, “Frames (Who’s Gonna Know)” is without a doubt the most gorgeous song on this album. He really did save the best for last.

Load more
Tags
Wizkid
Ikedichim Chibundu Follow on Twitter November 11, 2022Last Updated: November 11, 2022
Check Also
Close
Back to top button
Close
We use cookies on our website to give you the most relevant experience by remembering your preferences and repeat visits. By clicking “Accept”, you consent to the use of ALL the cookies. In case of sale of your personal information, you may opt out by using the link .
Cookie settingsACCEPT
Manage consent