For most, what comes to mind when a monster is mentioned is how to get away as fast as possible. The reaction, of course, might be different when the beast is not some ghastly manifestation from Valhalla but a piece of music.

Well, we doubt you would find yourself fearful and in need of emotional assurance after taking in what we are about to offer, “EA Monster” by Young Nudy. An album you have here, and it’s pretty potent and deserving of the flame emoji.

Have you seen the “monster” or care to see it? Then, it should be our pleasure to take you along as we explore this manifestation from Young Nudy’s ever-troubled universe. So hop along if you please.

A monster is a monster, Young Nudy appears to say with his album cover art. The songster, whose birth name is Quantavious Tavario Thomas, doesn’t just have “monster” as part of the album’s title; he had a monster in the project’s cover art as well.

Young Nudy’s monster had the image of a humanoid – or, better still, a ghastly imitation of a human, mouth ajar. In the open mouth are stuff peeps would readily call luxuries, including a mansion and a car. The list is by no means comprehensive.

What comes to mind from staring at that image alone is consumptive lunacy. But if the songster dwelled on that in the songs in the album is a matter of personal appreciation. 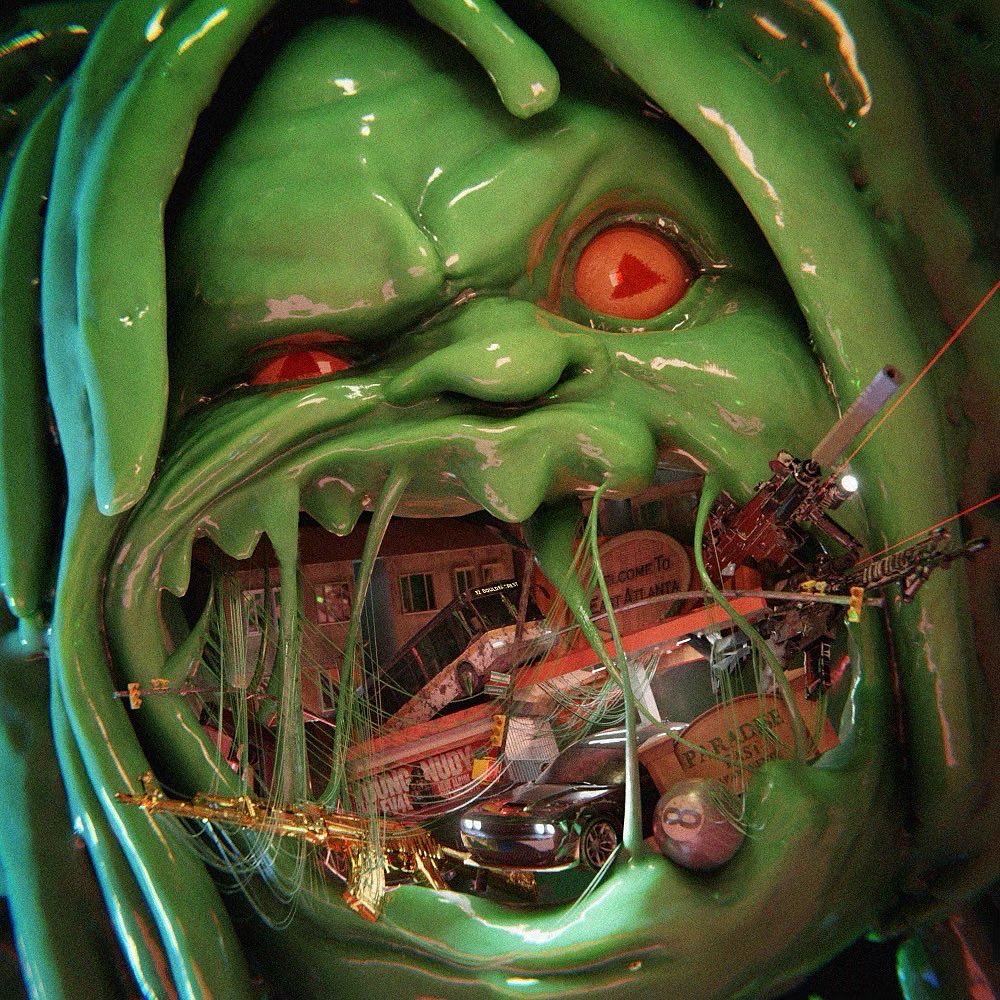 Tracks are like roadmaps into the soul of a project, taking the listener into sonic streets and avenues that the rapper would love the listener to have glimpses of. As fans of compacts tracklists, we’re more than chuffed with Young Nudy limiting himself to just 11 songs.

The lyrical journey begins with “Nun To Do” and continues with scorchers like “Nun To Do,” “KitKat,” “Impala,” “Fresh As F*ck,” “Lunch Meat,” “My Gang,” “No Chaser,” “Ready “Sick of Slime and “Duntsane,” ultimately ending with “Project X.” 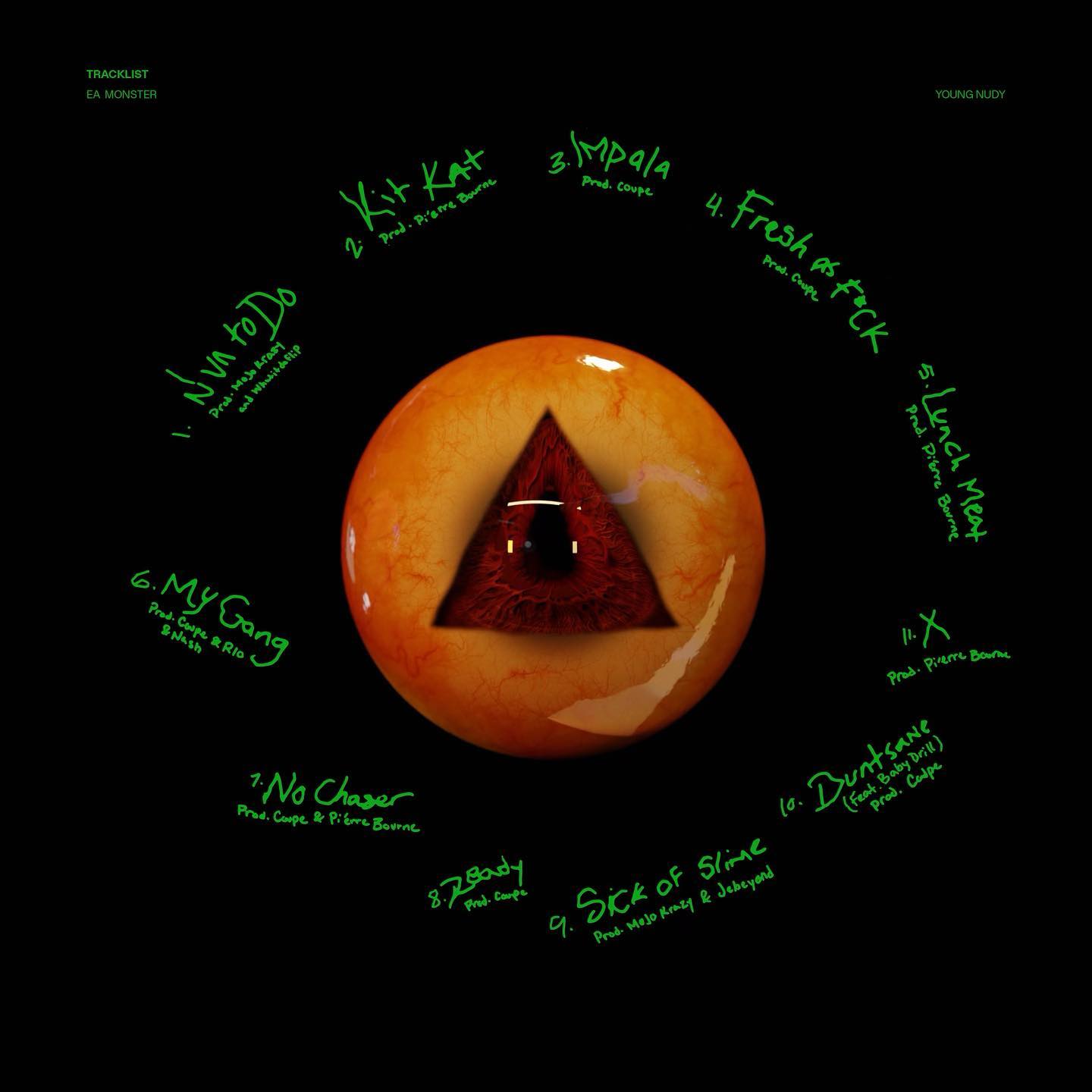 Not one but several messages glitter in Young Nudy’s “EA Monster,” from the politics of wealth, self-discovery, emancipation, and so much more. Although disparate on the surface, the messages form one artistic whole that’s only partly encapsulated in the album’s title. But that’s by the way.

For a project of 11 tracts, it is interesting that Young Nudy should elect to work with just one guest artist. “Duntsane,” the 10th track on the album, had BabyDrill as the sole guest. There was no featured artist before him and none after.

It’s unclear why Young Nudy elected to work with one featured artist. But, whether by design or accident, whether he wanted to present himself as being entirely in charge, he still managed to compose an album that didn’t lose much from having just one feature. In fact, the rapper was grand doing his thing almost solo

This album has a couple of lyrical winners – songs you listen to and want to hear again because they somehow speak to your spirit or address an aspect of reality that resonates with you. We count “Fresh As F*ck” as one such song.

For its latent ambitious notes that will rouse even the indolent of peeps, we count this song among stuff to hear – happily.

“My Gang” is another key song from the album. It is near impossible to listen to this song and not appreciate nth enraptures of brotherhood and friendship. Another jam that we love from the compilation is “Ready.” And no, we aren’t going to tell you why we love it. Find out. Lol.

Young Nudy is young, and he is all “nudy” in his album, illuminating aspects of his life and his thought process for his fans to observe. Therein lies a “monster.”

Load more
Tags
Young Nudy
John Anusie Follow on Twitter August 12, 2022Last Updated: August 12, 2022
Back to top button
Close
We use cookies on our website to give you the most relevant experience by remembering your preferences and repeat visits. By clicking “Accept”, you consent to the use of ALL the cookies. In case of sale of your personal information, you may opt out by using the link .
Cookie settingsACCEPT
Manage consent