The critically-acclaimed, multi-platinum band Young the Giant released “ACT II: EXILE”, the second act of their fifth studio album, “American Bollywood,” which will be released on October 21st. The album is being revealed in four acts, with two acts remaining: Battle and Denouement. American Bollywood will be the first album in four years since Mirror Master and the first since leaving the major label system. 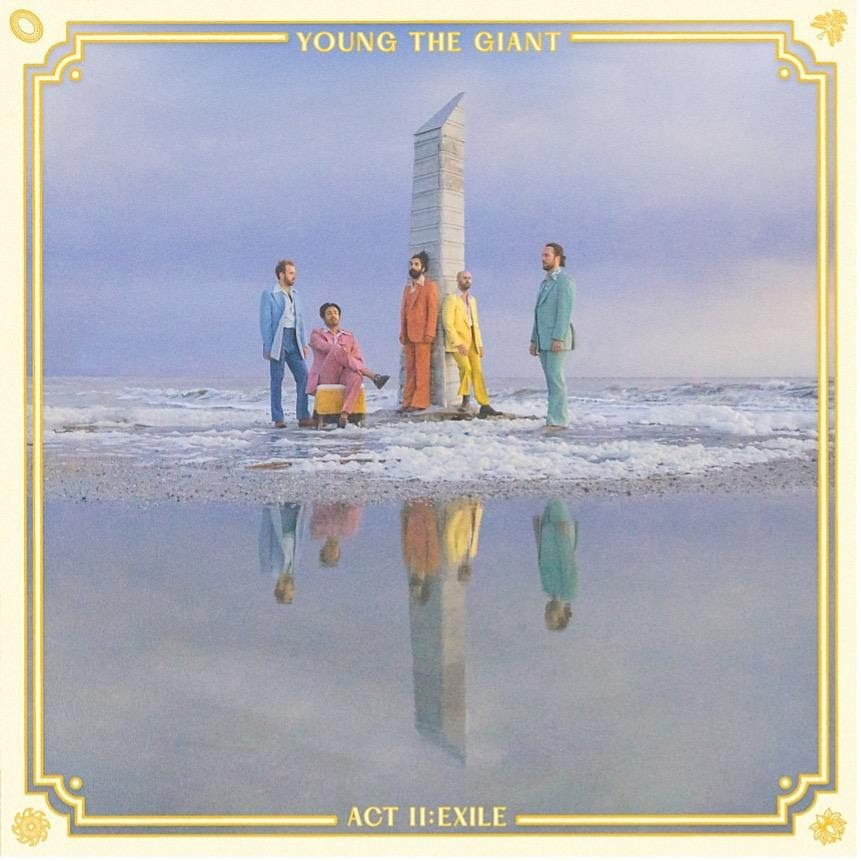 The album cover shows five men in different suit colours perched within the perimeter of a tower with a pointy end for a top. And judging from their postures and surrounding, one could quickly tell or believe that they are either patiently awaiting a person or thing, or they are abandoned and exiled, depicting the sad vibe that can also be found on the EP.

Made beautiful with the stringing of melodious chords from an acoustic guitar, Sameer gets started on “My Way,” the EP’s opener. Reaching into his emotions, he sings about an ill-fated relationship from the beginning, owing to the different backgrounds from which he and his lover stem. It’s a nicely-composed sad song that brings to light the struggles of an immigrant that finds himself in love with another with who he can’t have all to himself because he isn’t exactly welcome in the “Blue Blooded American family.” Hence, he makes peace with that fact as he hits the road with hopes that the god of love smiles on him again.

“Insomnia” comes next in line, with Sameer’s gentle singing blending with the sounds from his trademark acoustic guitar that enable him clear a path into his troubled, wandering mind that somehow does not seem to give him the tranquillity he desires to get some sleep at night. He talks about floating paper bags and a piece of trash on the boulevard and shattered glass which is typically brought about by a roaming mind that should be at a place at the particular time of day when humans should be asleep, as indicated by the loud ticking of a clock that can be heard toward the end of the song.

Continuing the streak of sad songs, he goes in again on “Tonight,” where he gives some narration about an uncomfortable ordeal that involved him ending up in jail and getting bailed out by his lover because there was nowhere or no one else to turn to. You can tell he’s sad on their behalf because he low-key sees himself as a burden to his lover, who has chosen to stick with and spend what remains of their life with the brokenhearted referring to himself. The sadness was vividly expressed in the soft, laid-back tone of his voice.

Ending things on an even sadder note, Sameer on “The Walk Home” opens up again, letting us into his lonely state of being and being courageous enough to be vulnerable to say, “I’ve lost myself.” But what is particularly beautiful is how he also offers encouragement to others who might feel left out and alone, singing in the chorus, “Under new conditions, you are not alone.” Though terribly sad, the four songs on the EP did not entirely fail to come with some nice, soothing touch.

The project tells the multi-generational saga of the American immigrant and the origins, exiles, battles, and denouement of reclaiming our collective identity. The band’s singer, Sameer Gadhia, is the son of Indian immigrants, making him a unique voice in American rock music.

Load more
Tags
Young the Giant
Ikedichim Chibundu Follow on Twitter August 15, 2022Last Updated: August 15, 2022
Back to top button
Close
We use cookies on our website to give you the most relevant experience by remembering your preferences and repeat visits. By clicking “Accept”, you consent to the use of ALL the cookies. In case of sale of your personal information, you may opt out by using the link .
Cookie settingsACCEPT
Manage consent