With “3800 Degrees,” YoungBoy’s fourth full-length solo album, he establishes his mark as a musician whose influence goes beyond the online community. Although sonically quite different, “3800 Degrees” has a similar vibe to the direction Young Thug went in after Barter 6, his first commercial mixtape, was released. “3800 Degrees” clocks in just 33 minutes, making it shorter than many of YoungBoy’s sometimes rambling albums.

It is more appealing to old head haters and more critic-friendly due to its compact design and vintage sound. The production has a traditional feel to it despite not nearly being retro, with crisp basslines and MIDI piano reminiscent of No Limit albums. YoungBoy, despite his willingness to defy convention, is almost like a Voltron created from the greats of Louisiana rap, including Lil Wayne’s alien wavelengths, Silkk the Shocker’s and Mystikal’s erratic intensity, Boosie and Kevin Gates’ bluesy fervor, and others. 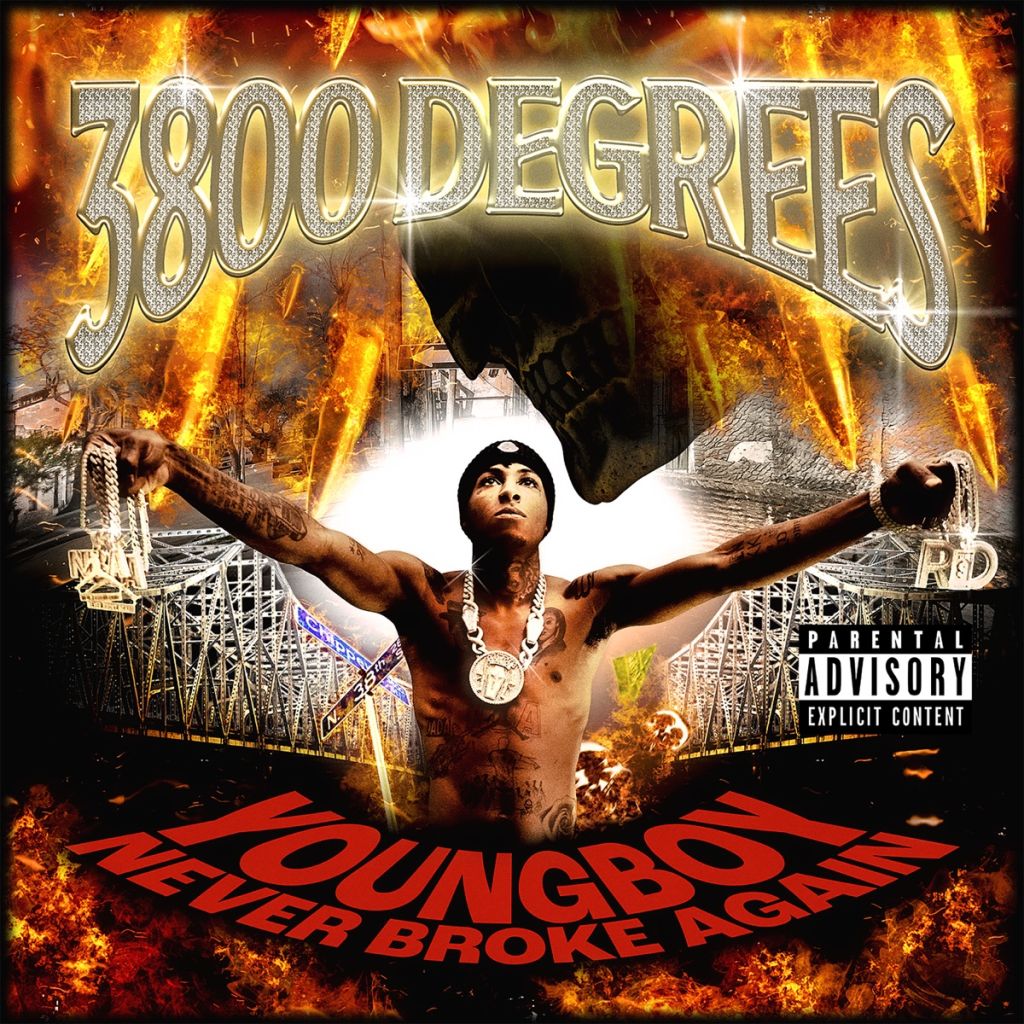 On a showy cover art, YoungBoy wears a pretty obvious poise on his countenance as he holds out both his hands to the side which leaves dangling his collection of iced-out jewelry in his grip. Matching what his hands are holding out is yet another pricey chain hanging proudly on his neck. In the background, however, is a lot of literal heat, represented by the flames of fire playing below and those pointy things that look like they are falling from a furnace above.

The line “So cutthroat, you would believe that they brought Slim back from Magnolia” from YoungBoy’s song “Choppa on My Shoulda” positions him as the literal rebirth of Louisiana rap’s golden age. On the bounce production “Ampd Up,” which features fellow Baton Rouge local Mouse on tha Track and a piano played in the montuno style of salsa, YoungBoy proudly displays his regional roots.

YoungBoy skillfully switches between a sing-along chorus and aggressive lyrics on “Won’t Step on Me.” He lets his Southern twang hang out by twisting “Baton Rouge” to rhyme with “would.” The unbridled intensity feels off-the-wall and first-take; his flow practically mocks the beat, never respecting its boundaries or rhythms, and the words stream outside the lines. On “Thug Nigga Story,” E-40 contributes a guest verse and product advertisement for his trademarked wine, the Earl Stevens Mangoscato, providing yet another point of comparison for YoungBoy’s wordy and erratic flows.

Specifically on the hook of “Hard,” NBA YoungBoy truly imitates Shy’s sound. Anyhow, you’re sure to adore everything about the song, from the bossy/street-inspired lyrics to the hard-hitting music to the chemistry between YoungBoy and Shy. YoungBoy still exists on his own terms and shows up with brazen defiance, even while using retro sounds. I ain’t no 2Pac of this generation, I’m AI YoungBoy, he raps on “It Could Go.” YoungBoy plays with tradition in the same way that he tinkers with the beat and combines his phrases in surprising ways.

The Louisiana rapper flaunts his local origins with brazen defiance on his fourth solo album. It serves as a reminder of how exhilarating he can be when he is concentrated and coherent. The paranoia of a life lived perpetually on edge permeates every moment as the agony and passion entwine.

Load more
Tags
NBA Youngboy
Ikedichim Chibundu Follow on Twitter October 15, 2022Last Updated: October 15, 2022
Check Also
Close
Back to top button
Close
We use cookies on our website to give you the most relevant experience by remembering your preferences and repeat visits. By clicking “Accept”, you consent to the use of ALL the cookies. In case of sale of your personal information, you may opt out by using the link .
Cookie settingsACCEPT
Manage consent