The deadline for collecting Permanent Voter Cards (PVCs) has been extended by one week by the Independent National Electoral Commission (INEC). When the PVC collection procedure began on December 12, 2022, INEC said it would end on January 22, 2023. However, Festus Okoye, the Commission’s commissioner for voter education, announced a revised deadline for the PVC collection on Thursday following a discussion at the Commission’s offices.

On that same day, Mr. Okoye issued a statement saying that the PVC collection would stop on January 29. According to him, the extension was agreed upon so that Nigerians would have more time to obtain their PVCs before the general elections, which will take place in 43 days. Accordingly, PVCs were distributed for a week at Local Government Offices before INEC began distributing them to Registration Areas/Wards on January 6.

Initially slated to terminate on January 15, the distribution at the ward level now lasts until January 22, after which the exercise will be returned to the local government offices. The drill continues at the local government office through January 29, he stated. According to Mr. Okoye, INEC was impressed by how many Nigerians showed up to pick up their PVCs at the Ward level. However, the Commission stated that it is currently looking into claims of official extortion and “some unscrupulous voters” attempting to obstruct the process at sure of the collection centers.

PVC collection centers, or Permanent Voter Card collection centers, are locations where individuals can go to collect their PVCs, which are issued by the electoral commission of a country. PVCs are typically required for individuals to be able to vote in elections. These centers are usually set up by the government or the electoral commission. They are typically located in convenient, accessible locations such as government buildings, local government offices, schools, or post offices. The process of collecting a PVC may involve providing identification and proof of residence. The requirement and process for collecting PVCs may vary depending on the country.

In Nigeria, PVC collection centers are set up by the Independent National Electoral Commission (INEC) to distribute Permanent Voter Cards (PVCs) to eligible Nigerian citizens. The PVC is a mandatory requirement for citizens to be able to vote in the Nigeria General Elections.

It’s important to note that the process for collecting PVCs in Nigeria may vary depending on the state and local government area, so it’s best to check with your local INEC office for specific information and requirements in your area. Find the PVC collection centers here.

Tags
INEC PVC
Ikedichim Chibundu Follow on Twitter January 14, 2023Last Updated: January 16, 2023
Check Also
Close
Back to top button
Close
We use cookies on our website to give you the most relevant experience by remembering your preferences and repeat visits. By clicking “Accept”, you consent to the use of ALL the cookies. In case of sale of your personal information, you may opt out by using the link .
Cookie settingsACCEPT
Manage consent 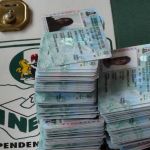