Nnamdi Okwu Kanu, known simply as Nnamdi Kanu, is a British Nigerian political activist and leader of the Indigenous People of Biafra, IPOB, a collective fighting for the creation of a new nation from the easter part of what is today known as Nigeria.

Given the nature of his advocacy, he’s had sporadic clashes with the Nigerian authorities, which has sent him to the slammer a couple of times while instituting a case of terrorism against him.

Nnamdi Kanu, who is born to a royal family in Abia state, pleads not guilty to the cases of terrorism against him, insisting that he’s only calling for a referendum for Biafra and nothing else.

Given the nature of his advocacy, he had quickly drawn a massive following, both online and offline, with people disillusioned with the Nigerian state raising Biafran flags in solidarity. 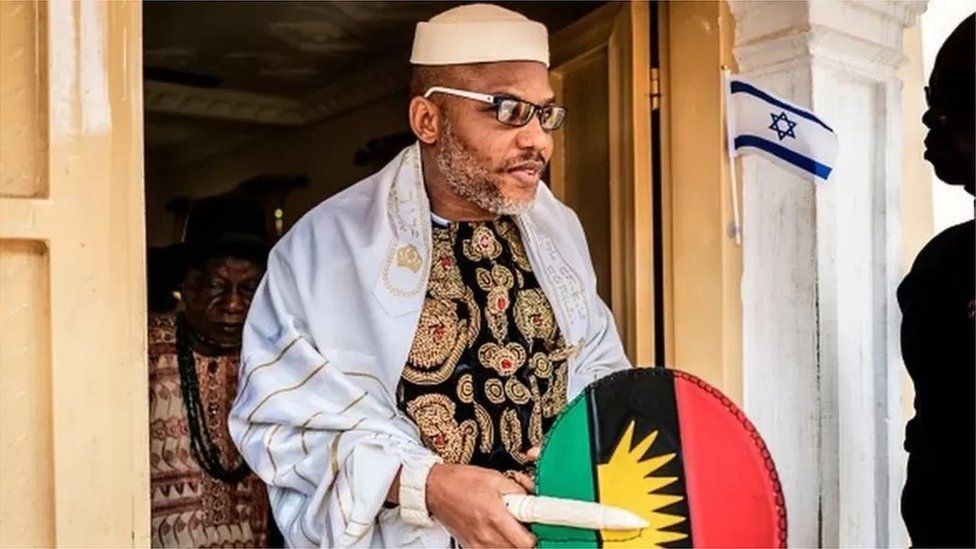 Nnamdi Kanu\s life is like that of a soldier in the trenches – either being shelled or lobbing grenades at his enemies. The advocacy for Biafra consumes his time, his life, everything.

Nnamdi Kanu has houses in Abia state, Nigeria, and the United Kingdom. While his Abia home is known and had at some point been invaded by soldiers, leading to scores of deaths, his UK home is unknown. 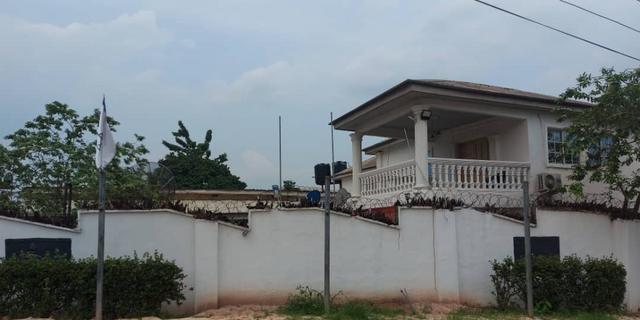 Given the nature of his advocacy, which makes him a target, Nnamdi Kanu has kept several aspects of his life private, including the make of the cars he owns. He is not your Instagram dandy.

The IPOB leader’s net worth is unknown, but some sources claim he could be worth up to $10 million.

Nnamdi Kanu’s very existence revolves around the agitation for Biafra, but he is not the first to grab the initiative. There was the late Colonel Emeka Odumegwu-Ojukwu, whose agitation led to the Nigeria-Bafra War, and there was also Ralph Uwazuruike of the Movement for the Actualization of the Sovereign State of Biafra (MASSOB).

Nnamdi Kanu insists on Biafra referendum, and eventual Biafran independence, or nothing. Nnamdi Kanu’s family comprises four members – the IPOB leader himself, his wife Uchechi Okwu Kanu, ab unnamed son he had with an unknown woman, and Nnabuikem, the song he had with Uchechi in 2016. 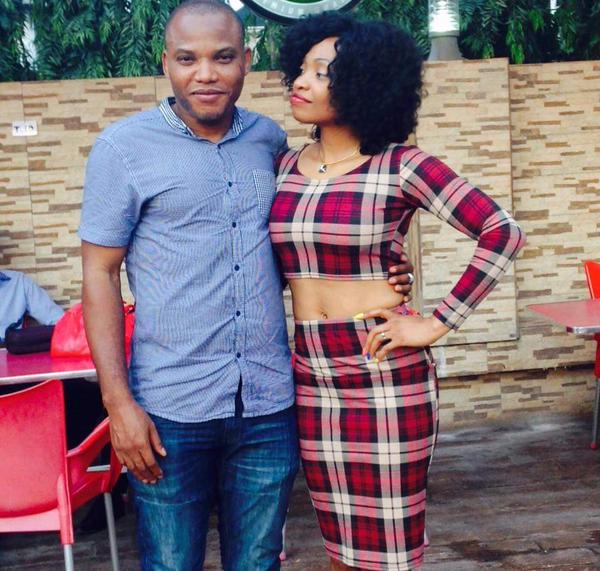 Uchechi Okwu Kanu is a Nigerian lawyer from Abia state – the same state as her husband, Nnamdi Kanu. She is the only known legal wife of the IPOB leader. She is known to be his key supporter and had once accused the Nigerian authorities after he disappeared internationally in 2018. 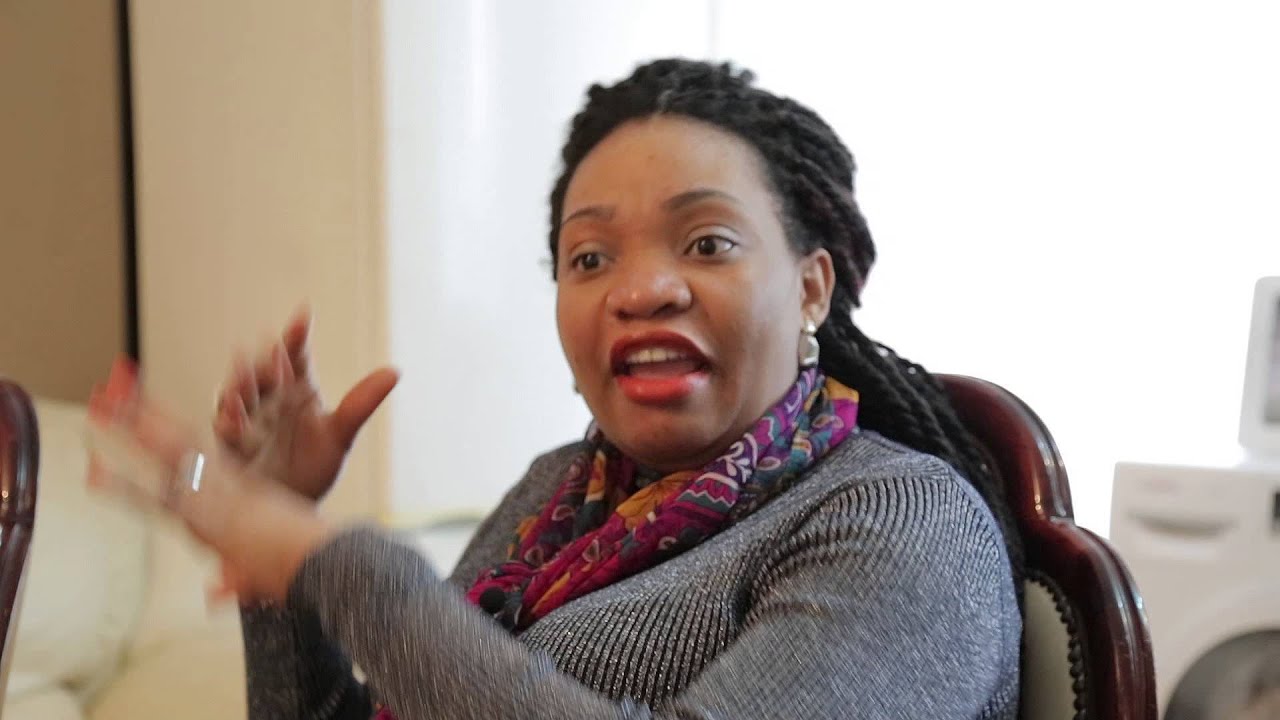 Nnamdi Kanu is the father of two boys. The name of his first son is unknown, and so is the name of the woman who birthed him. However, his second son is Nnabuikem Nnamdi Okwu Kanu. He was born in the United Kingdom to his wife Uchechi. When are they going to release Nnamdi Kanu?

Probably only the Nigerian government knows, and that’s because although the appeal court has discharged the IPOB leader, the DSS is still holding on to him.

What is the net worth of Nnamdi Kanu?

Only the IPOB leader himself knows how much he is worth, especially as most of his assets are not public – for good reason. However, some sources put his net worth at $10 million.

Is Nnamdi Kanu an Israeli citizen?

No, but he has a well-documented love for the Jewish state.

Can Nnamdi Kanu get Biafra?

Of course, but he might not be around to hear the sound of victory. His case might be like that of Theodor Herzl, one of the biggest fighters for the creation of a Jewish state. Herzl died before the Jewish state of Israel was eventually created from the partition of Palestine.

It isn’t that the United Kingdom cannot help the Biafran leader; it has just not shown the will to do so. It has the power to help if it so desires.

Yes, and that’s in the sense that Nigeria’s appeal court discharged him. But the Nigerian government isn’t prepared to let him go just yet.

Although expected at the burial of his parents, he was unavoidably absent at the ceremony.

No. He merely dissociated himself from the antics of the Finland=based Simon Ekpa, who has been accused of acting like a paid agent of the Nigerian government.

What does Nnamdi Kanu do for a living?

He is an economist and political activist with strategic investments – most of them hidden from his adversaries, including the Nigerian government.

Does Nnamdi Kanu have a private jet?

No, Nnamdi Kanu isn’t known to have a private jet. However, he is said to travel on chartered private jets.

Does Nnamdi Kanu have a brother?

How many wives does Nnamdi Kanu have?

The IPOB chief is known to have just one wife: Uchechi Okwu Kanu.

Where does Nnamdi Kanu live?

Nnamdi Kanu lived in the United Kingdom until he was arrested while on a trip across Africa and sent to Nigeria, where he is currently in DSS custody.

How many followers does Nnamdi Kanu have?

No one knows exactly how many followers Nnamdi Kanu has – not even the man himself. However, given the spread of his advocacy and even his international appeal, his followers should be in the millions.

How many degrees does Nnamdi Kanu have?

It’s unclear exactly how many degrees he has, but he has studied in both  Nigeria and Great Britain.

What does Nnamdi Kanu want?

He wants an independent Biafran state and nothing more. He is no believer in one Nigeria.

Has Nnamdi Kanu been released from DSS custody?

At the time of writing, Nnamdi Kanu had not been released from DSS custody. This has been a source of agitation to some of his followers, especially given his recent discharge by the court.

Yes, Nnamdi Kanu is still alive. He was rumoured dead at some point. But he is very much alive.

Is Nnamdi Kanu a lawyer?

Was Nnamdi Kanu discharged and acquitted?

What did Nnamdi Kanu say about Peter Obi?

Peter Obi might have a massive following across Nigeria right now, but Nnamdi Kanu is one man who does not fancy the former Anambra governor. He had called for the stoning of Peter Obi at sight. So far, there is no evidence such has happened.

Where was Nnamdi Kanu born?

The Biafran agitator was born in Abia state in the southeastern part of Nigeria, West Africa.

Tags
Featured Nnamdi Kanu
John Anusie Follow on Twitter January 16, 2023Last Updated: January 23, 2023
Back to top button
Close
We use cookies on our website to give you the most relevant experience by remembering your preferences and repeat visits. By clicking “Accept”, you consent to the use of ALL the cookies. In case of sale of your personal information, you may opt out by using the link .
Cookie settingsACCEPT
Manage consent 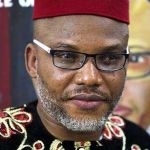