At his “More Love Less Ego” concert at the Madison Square Garden (MSG) in the US, Wizkid gave a performance that will go down in history, and reports about how much money he made from the event have surfaced. On November 16, 2022, the starboy had a performance in front of a crowd of 20,000 people in New York, USA.

It was said that the artist sold over 12,000 tickets for the event at a price of $77 each, making the performance one to remember. One estimate put the singer’s profit from the single-day performance at above $1 million. The venue has hosted performances by other African artists before Wizkid, including Burna Boy, whose earnings were also made public. 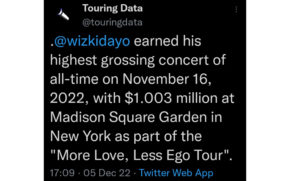 Wizkid will be continuing his performance run next year when he starts off with the North American More Love Less Ego Tour. The superstar will also be performing at the London Stadium in June, next year, all in the same bid to promote the new release which is receiving a warm welcome from the fans as many tracks off the new album have surpassed the 1 millionth mark on Spotify.

Speaking of performances, the Nigerian singer put word out regarding his Lagos show. To the dismay of many, Big Wiz claims his Lagos performance slated for December 30th would in fact be his last in the city.

Tags
Wizkid
Ikedichim Chibundu Follow on Twitter December 6, 2022Last Updated: December 6, 2022
Back to top button
Close
We use cookies on our website to give you the most relevant experience by remembering your preferences and repeat visits. By clicking “Accept”, you consent to the use of ALL the cookies. In case of sale of your personal information, you may opt out by using the link .
Cookie settingsACCEPT
Manage consent 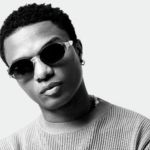