Sunday’s Super Bowl LVI saw a major showdown between the Los Angeles Rams and the Cincinnati Bengals. But while players retreated after the 2nd quarter with the Rams leading, the show only got more spectacular, having ’90s legends like Snoop Dogg, Eminem, Dr. Dre and Mary J Blige take the stage during the halftime performance.

The Pepsi-sponsored halftime show began with the iconic hit from Snoop Dogg and Dr. Dre, “The Next Episode.” The artists danced across all-white set built to resemble a strip mall.

Mary J. Blige joined the stage with her song, “Family Affair,” dancing in shining thigh-high boots covered in mirrors and silver glitter before smoothly transitioning into her next song, “No More Drama.”

Pulitzer Prize-winning artist Kendrick Lamar made his entrance with the prologue of his hit “M.A.A.D City,” before an all-black step group joined him in performing “We ‘Gon Be Alright.”

Eminem’s also took the Super Bowl stage to render his chart-topping hit “Lose Yourself,” accompanied by Anderson Paak on the drums.

Tags
Dr. Dre Eminem Kendrick Lamar Mary J. Blige Snoop Dogg Super Bowl LVI
Ikedichim Chibundu Follow on Twitter February 14, 2022Last Updated: March 31, 2022
Back to top button
Close
We use cookies on our website to give you the most relevant experience by remembering your preferences and repeat visits. By clicking “Accept”, you consent to the use of ALL the cookies. In case of sale of your personal information, you may opt out by using the link .
Cookie settingsACCEPT
Manage consent 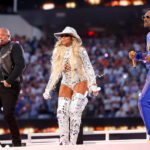