Sunday night’s Grammy Awards was definitely less chaotic in comparison to the Academy Awards the weekend before, yes, but it also doesn’t mean it went down without a memorable incident. According to Complex, the Recording Academy has come under some hot fire online for its disrespectful tribute to the late fashion icon, Virgil Abloh.

During the course of this year’s segment of “In Memoriam”, which is an annual thing, the late father of two happened to be one of the many famous faces honored by audiences all over the world, though the description accorded to him failed woefully at accurately describing all that Abloh accomplished in his brief existence.

“Hip Hop Fashion Designer” was what the Grammys placed under his name during his remembrance, clearly disregarding the fact that he did start his own fashion label, the crazily successful Off-White, and had also worked several years in the office of an artistic director for Louis Vuitton’s menswear department before his death.

Abloh had also worked with huge brands like IKEA and Nike in the course of his fashion career, receiving a Masters degree in Architecture from the Illinois’ Institute of Technology – and this was even before he could penetrate the colorful world of fashion.

Fans have gone online to express their frustration and anger over the disrespect.

“Very disrespectful for the Grammys to call Virgil Abloh a ‘Hip Hop Fashion Designer’… The micro-aggressive racism we see in fashion and entertainment today still baffles me,” one frustrated user shared on Twitter. “It’s like a racially-charged sneak diss or something,” wrote another person.

The list of accomplishments Virgil Abloh had in fashion, art, architecture, music, etc just to get Grammy called him "hip hop fashion designer" smh. "it is equivalent when white people said the N word to black people" – Kanye pic.twitter.com/IZkt1m5Exw 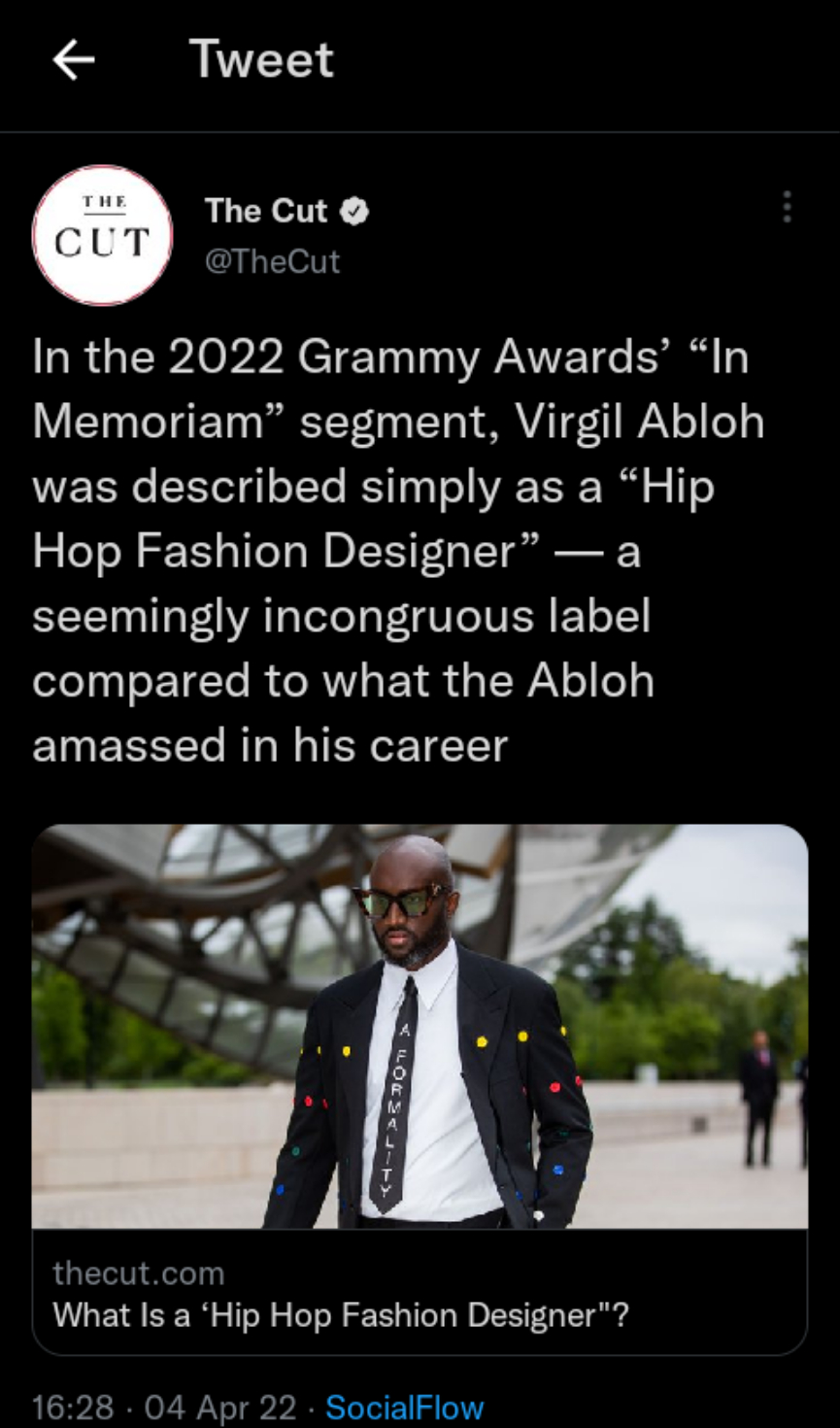 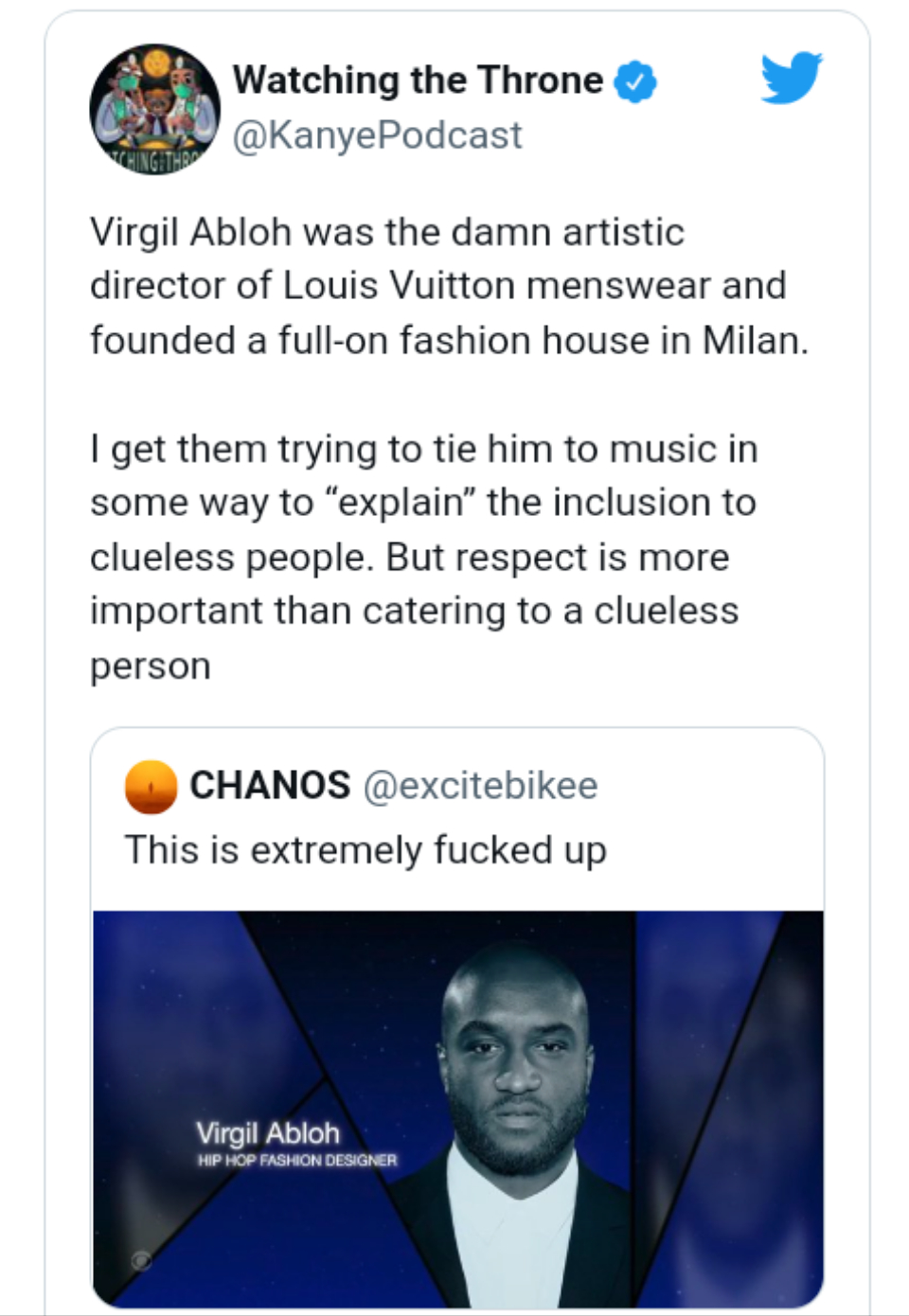 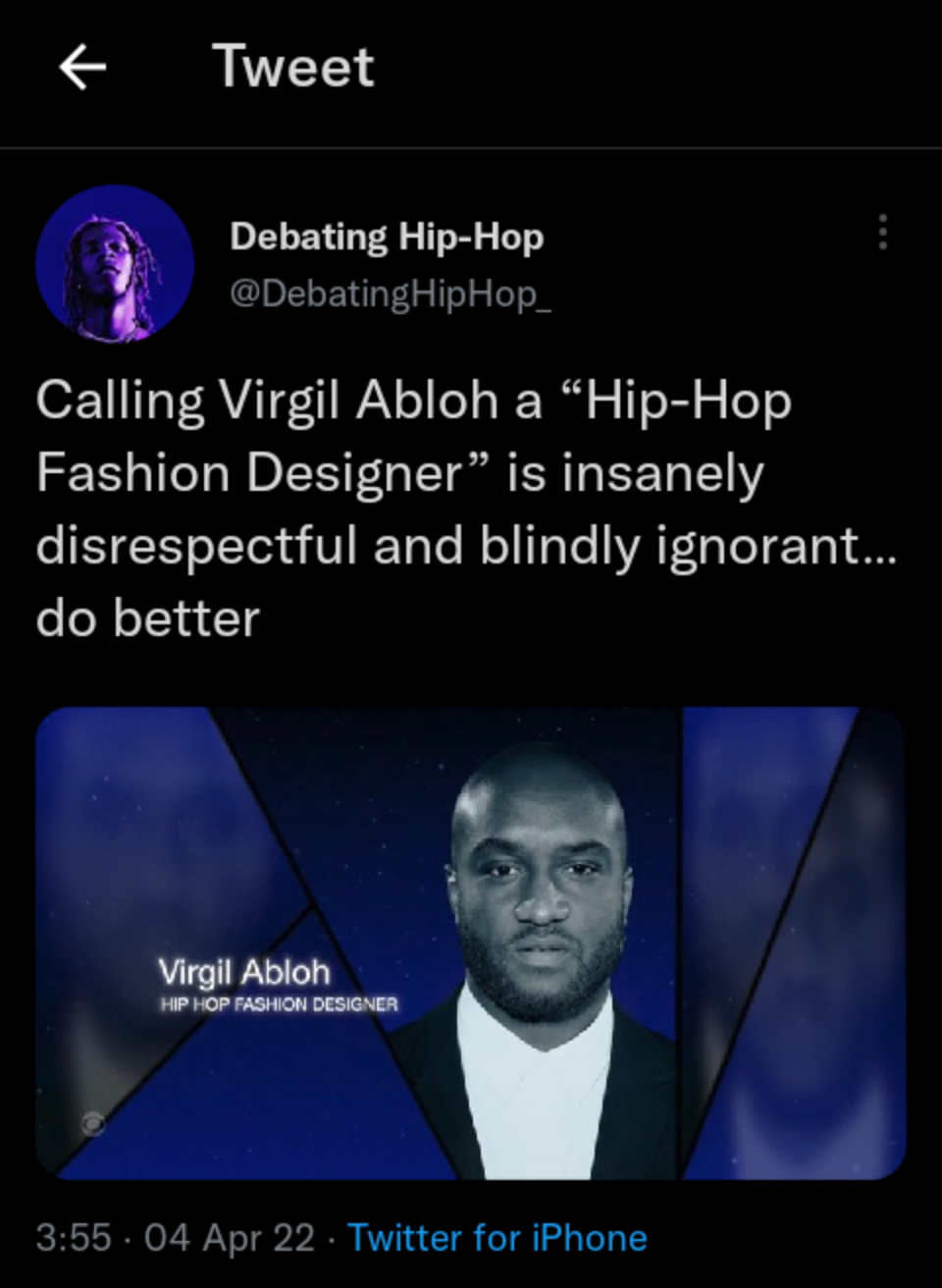 Tags
2022 Grammys Virgil Abloh
Ikedichim Chibundu Follow on Twitter April 5, 2022Last Updated: April 5, 2022
Check Also
Close
Back to top button
Close
We use cookies on our website to give you the most relevant experience by remembering your preferences and repeat visits. By clicking “Accept”, you consent to the use of ALL the cookies. In case of sale of your personal information, you may opt out by using the link .
Cookie settingsACCEPT
Manage consent