Denzel Curry has announced a new album on the way, titled “Melt My Eyez See Your Future.” With a title such as this, should his fans look forward to a wave of prescience?

We can’t tell, but then, expectations are already very high for what’s on the way, a follow-up to his (and Kenny Beat’s) “Unlocked” album of 2020 and the remix of the same a year later

In a post to Instagram a day ago, the songster had released a teaser of what’s imminent while urging fans to look forward to the real thing soon.

Not known as a peddler of bad verses, Denzel Curry takes his fans into the arid in the trailer of the album on YouTube.

The imminent project will feature the likes of JPEGMAFIA, Thundercat, Rico Nasty, T-Pain, Robert Glasper, Kenny Beats, and several others.

While there’s no official release date for “Melt My Eyez See Your Future,” expectations are already very high, with some of the songster’s fans screaming they can’t wait to hear what Denzel Curry and his squad have been cooking.

You may want to take this as an invitation to check back here for the project when it’s released we can’t wait for the Curry rice. Sorry, album. Stay tuned, if you please.

Tags
Denzel Curry
John Anusie Follow on Twitter January 6, 2022Last Updated: March 31, 2022
Check Also
Close
Back to top button
Close
We use cookies on our website to give you the most relevant experience by remembering your preferences and repeat visits. By clicking “Accept”, you consent to the use of ALL the cookies. In case of sale of your personal information, you may opt out by using the link .
Cookie settingsACCEPT
Manage consent 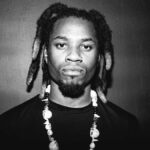