A copyright strike is not something anyone would love to have because, besides reputational damage, there’s also the possibility of a loss of income. Griselda Records is still reeling from the copyright strike by World Wide Entertainment (WWE).

Back in October, WWE announcer Greg Hamilton had called out Griselda Records boss Westside Gunn on Instagram for using his voice on his songs. In his callout, he’d accused the Buffalo collective of stealing his voice for “incoherent kindergarten fables.”

For this peccadillo, Hamilton is adamant Griselda records will pay. He demanded an apology as a key for him not collecting everything from the record label. He also warned the collective not to ever use his voice again.

The others are “The Hurst Business,” a collaborative work by Wetside Gunn, Smoke DZA, and Wale, and “French Toast” (Westside Gunn Ft. Wale and Joyce). The last song on the list is “Allah Sent Me.” It had Westside Gunn as the lead rapper and Benny The Butcher and Conway The Machine as guests. 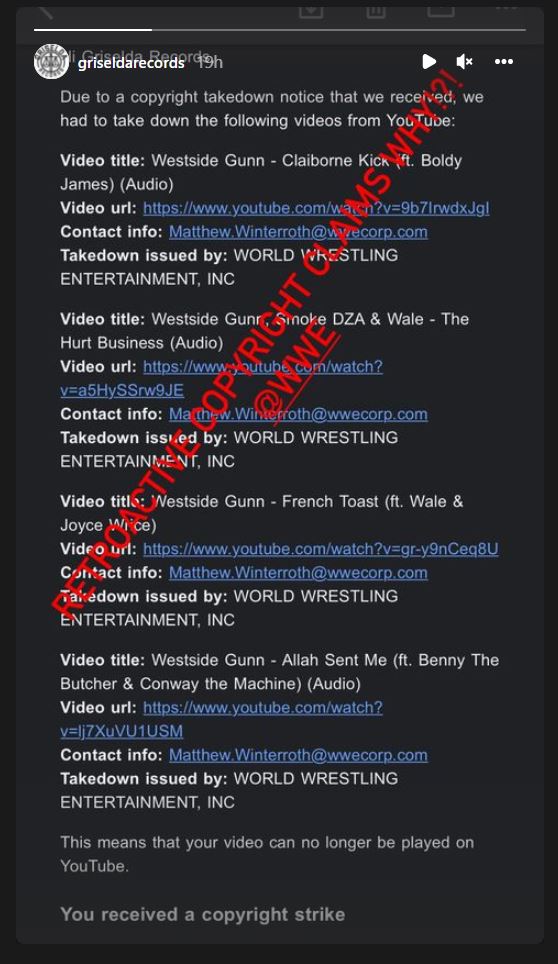 Tags
Greg Hamilton Griselda Records WWE
John Anusie Follow on Twitter January 6, 2022Last Updated: March 31, 2022
Check Also
Close
Back to top button
Close
We use cookies on our website to give you the most relevant experience by remembering your preferences and repeat visits. By clicking “Accept”, you consent to the use of ALL the cookies. In case of sale of your personal information, you may opt out by using the link .
Cookie settingsACCEPT
Manage consent