The Afrobeats icon has responded to the news that he will be touring with Wizkid.

Wizkid recently announced that the Duo would go on a joint tour, and Nigeria’s superstar of the Afrobeats genre, Davido has responded- though not vocally or in writing.

Grammy-winning musician Wizkid, who according to the Media, has allegedly been at odds with fellow Superstar Davido for some time, astonished his fans on January 18, 2022, when he announced that they would be embarking on a joint tour following his “More Love, Less Ego” tour.

The singer responded to the news by liking the post on Instagram, carried on by the media outlet and blogger Tunde Ednut, even though neither OBO nor his management has yet to officially and directly respond to the tweet Machala made. 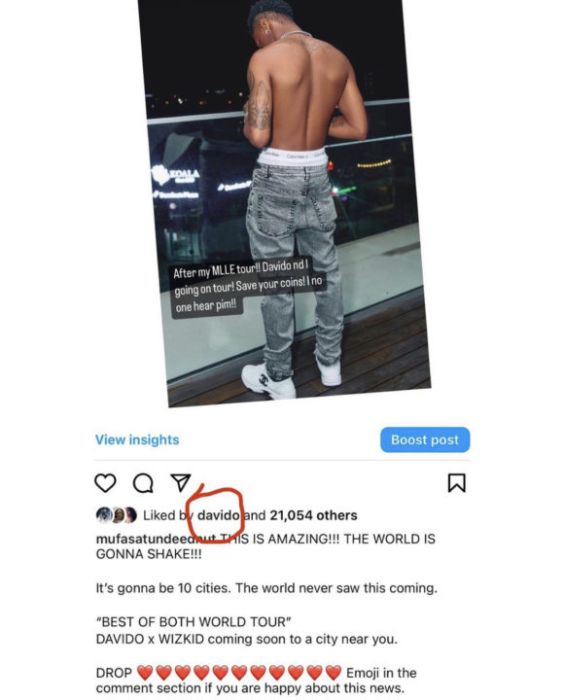 Following the news, Fans of both artists have been at loggerheads at the news, with one faction anticipating the collaboration and another throwing tantrums over the information. Tantrums like that of Mr. Jollof recently.

Either way, Davido has confirmed joining Wizkid on tour, as many celebrities are hoping, by reacting positively to the current “news of the Year” in the Nigerian Music Scene.

Tags
Davido Wizkid
Ebuka NwachukwuJanuary 19, 2023Last Updated: January 19, 2023
Check Also
Close
Back to top button
Close
We use cookies on our website to give you the most relevant experience by remembering your preferences and repeat visits. By clicking “Accept”, you consent to the use of ALL the cookies. In case of sale of your personal information, you may opt out by using the link .
Cookie settingsACCEPT
Manage consent