Sammie Okposo seems to be moving on from the wrong reasons that have had his name on tabloid headlines in recent times, after reactions went wild when his alleged side chick came out with a pregnancy news, narrating how Sammie has been a no-show since then turning his back to her.

Sammie surfaced later with an apology post to his wife, showing some responsibility for his actions, though some say that was just for show. But who can really tell? What we can tell you, though, is that the singer just dropped something of a gospel banger titled “Comot Body”.

On the song, he features two very talented guys, Mike Abdul & Bidemi Olaoba, and they bring their different spices and flows and some rap too, to shake things up. The strong afrobeat influence on the song adds a certain funk to the rhythm. Even if you are an atheist, you might somehow find yourself moving a body part to those bouncy drums.

Taking things up a notch, Sammie dropped the visual to the song some few days ago, and it is everything you would like. Colorful and easy on the eyes. Go check out the song on any of the music streaming plat of your choice. Meanwhile, here’s the video below:

Tags
Comot Body Sammie Okposo
Ikedichim Chibundu Follow on Twitter March 1, 2022Last Updated: March 31, 2022
Back to top button
Close
We use cookies on our website to give you the most relevant experience by remembering your preferences and repeat visits. By clicking “Accept”, you consent to the use of ALL the cookies. In case of sale of your personal information, you may opt out by using the link .
Cookie settingsACCEPT
Manage consent 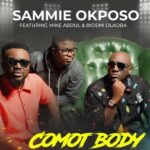