American rapper and billionaire, Ye, recently proclaimed Essence to be the greatest song in music history. Celebrities like Naomi Campbell, Wizkid, Tems, and others have responded. The internet exploded in joy when Kanye West, popularly known by his legal name Ye, lauded Wizkid. On his Instagram page, the Grammy-winning legend recently hailed Wizkid’s song as the greatest ever. He wrote: “Best song in the history of music to date.”

Not just Kanye appears to be a fan of Wizkid’s music. Wizkid has garnered worldwide notice since the release of “Made in Lagos” in 2020, particularly with the album’s song “Essence.” Music enthusiasts all across the world praised the “Essence” remix with Justin Bieber and Tems that was released years later. A B.E.T award, an NAACP award, a Headies award, and a Soul Train Music award have all been given to “Essence.” It received a Grammy nomination as well.

Naomi Campbell, an American model and Wizkid’s friend, also appreciated Kanye’s post. She made a comment on Kanye’s page and stated, “Yes!!” Thank you.” Along with multiple love emoticons, Naomi posted it to her Instagram story. comedian Mr. Jollof, singer Joeboy, DJ Tunez, and Dotman were among many who commented on Kanye’s post. 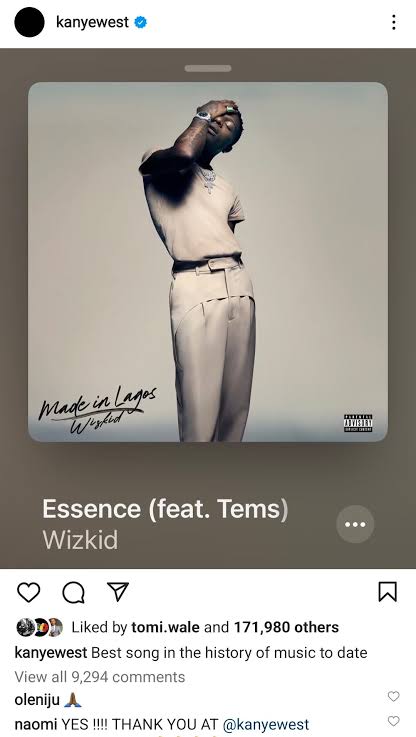 Don't Miss
Tags
Wizkid
Ikedichim Chibundu Follow on Twitter September 6, 2022Last Updated: September 6, 2022
Check Also
Close
Load more
Back to top button
Close
We use cookies on our website to give you the most relevant experience by remembering your preferences and repeat visits. By clicking “Accept”, you consent to the use of ALL the cookies. In case of sale of your personal information, you may opt out by using the link .
Cookie settingsACCEPT
Manage consent