From the ‘Sk8r Boi’ reference in ‘Bois Lie’ to the snarling ‘Bite Me’, ‘Love Sux’ is an unapologetic blast of self-empowerment. While her 2019 album, ‘Head Above The Water’, was somewhat cathartic and emotionally triggering, ‘Love Sux’ deals with shitty relationships and the tense electricity of a first kiss. The title track is dripping in major rockstar attitude, while ‘Kiss Me Like The World Is Ending’ would easily pass as a euphoric, urgent anthem.

A good number of the songs on ‘Love Sux’ clock in at under three minutes, giving the record a burning sense of purpose. Every moment on the album is deliberately melodramatic, from the fraught emotion behind the vulnerable, delicate ballad ‘Dare To Love Me’ to the snarling guitars of ‘Déjà Vu’.

On Love Sux, it’s 2002 all over again. The guitars are raw and racing, the choruses are packed with shout-along catchiness, and the whole thing hurtle past in less than half an hour. The production is slick, Lavigne’s vocal is unwavering and loaded with just enough attitude. 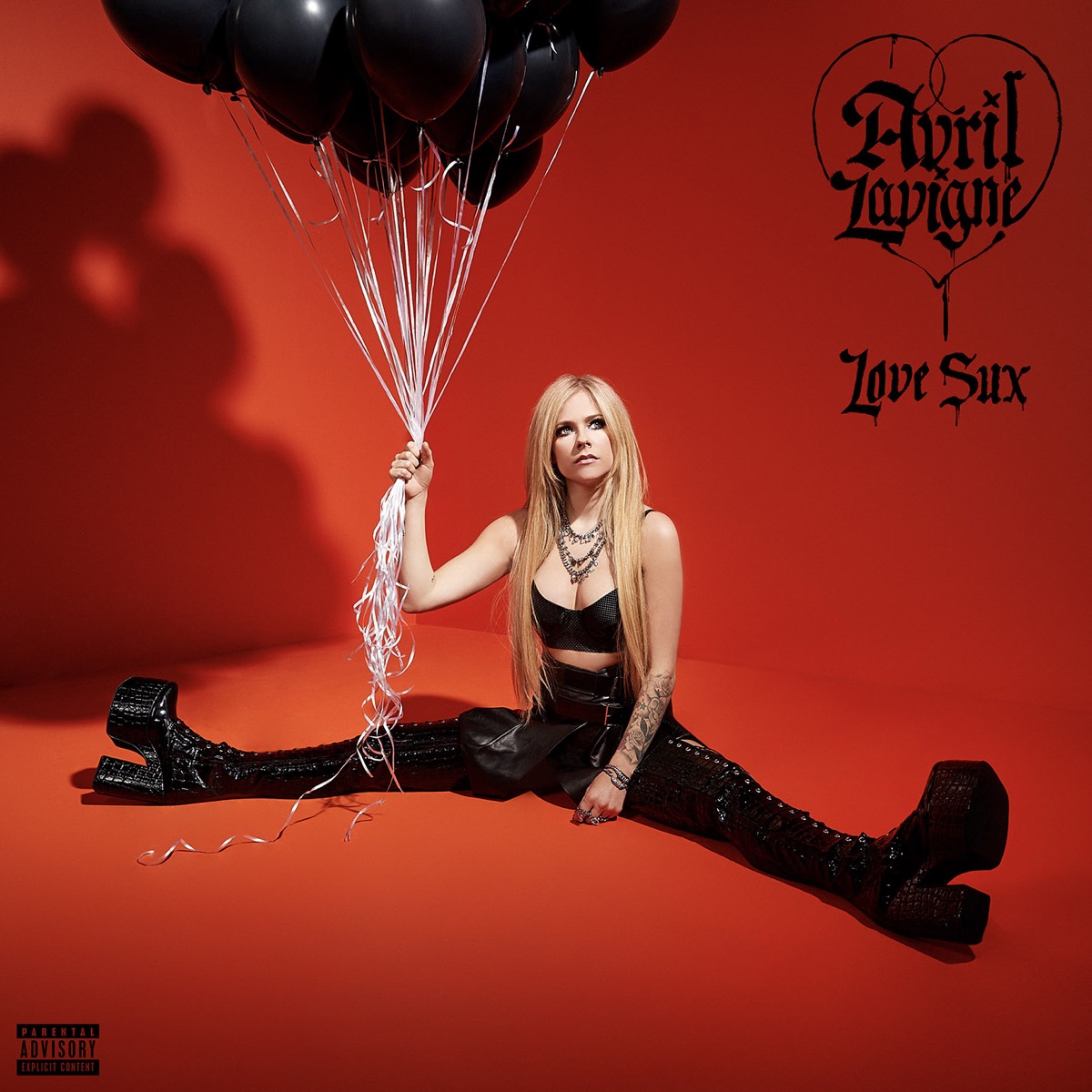 Avril is dressed in all-black, a black crop top that plays on some cleavage reveal, over black, tummy-high leather pants that finishes up in black, high shoes—looking the part of the rockstar. The rockstar sits with her legs spread apart in a yoga-like pose, holding on to tiny threads tied up to the equally black balloons floating above her head.

Her name and album title can be seen written on the wall behind her and in a special font. But we also notice something about the wall and generally the room she finds herself in. She’s in an all-black outfit in a room painted all red, which many would dub the colour of love, showing that what is happening around her does not concern her, even if it’s love. In other words, “If love is in the air, I would rather hold my breath.” Many thanks to past trauma from terrible experiences.

She starts her journey with the opener “Cannonball,” where a Bad Religion power riff gives way to hurtling digital production.

The lead single off the album “Bite Me” revels in some would-have-been and some regret, with Barker pounding away on drums, just like he does for basically most of the album. The addicting second single, “Love It When You Hate Me”, is the best of the bunch, boosted by a punchy verse from Blackbear and magnetism from Lavigne, who is unsurprisingly confident in this style.

While the album is mainly centred on ugly breakups and vague heartache, the rockstar goes tender for “All I Wanted,” a sweet “we’re in this together” cut with Blink’s Mark Hoppus, adding a steady albeit familiar vocal. Much of the rest is hollow pop-punk; the same applies to New Found Glory or Simple Plan.

Machine Gun Kelly also made an appearance on “Bois Lie”, the second track on the L.P., which builds to a he-said-she-said climax; a sonic lookalike to MGK’s “Forget Me Too” with Halsey 2020 collaboration.

Load more
Tags
Avril Lavigne
Ikedichim Chibundu Follow on Twitter March 2, 2022Last Updated: March 31, 2022
Check Also
Close
Back to top button
Close
We use cookies on our website to give you the most relevant experience by remembering your preferences and repeat visits. By clicking “Accept”, you consent to the use of ALL the cookies. In case of sale of your personal information, you may opt out by using the link .
Cookie settingsACCEPT
Manage consent