The Sick, The Dying… And The Dead!

“The Sick, the Dying… and the Dead!” is yet another strong addition to the Megadeth catalog, being quite diverse and still brimming with the band’s signature ferocity and swagger. There is a maturity here that fits nicely with the fast-paced nature of the thrashier aspects taken from the back catalogue; while it draws inspiration from the classics, it doesn’t rely on rehashing the past.

The weak-theming and occasionally odd song choices drag it down a little, but Megadeth ultimately show they can keep pushing through whatever life throws at them. One might anticipate the finished product to be a somber and unfocused slog given the troubled and agonizingly drawn-out circumstances of its creation. But if there’s one thing we should all know by now, it’s that Dave Mustaine absolutely thrives in the face of difficulty. 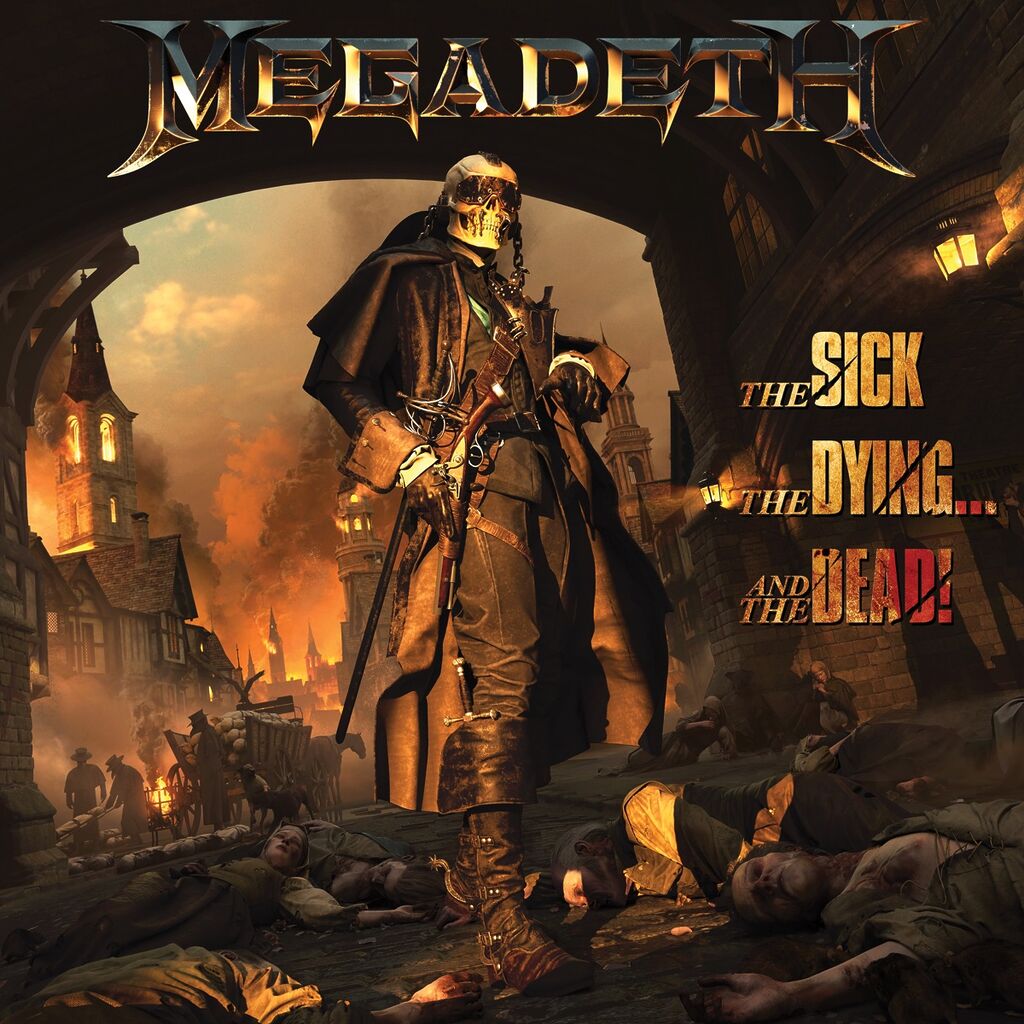 A warrior, looking the part, is draped fully in his battle attire and is standing over some bodies sprawled on the ground that could easily be mistaken for dead guys. Chances are, they could also be terribly sick. What the entire background and setting of the art screams is dystopia and war and commotion, as tall buildings go up in flames, with bodies and rubble littered everywhere. Then again, it could also be that the proud, fully-clothed warrior posing for a pic there was responsible or had a hand in all that destruction. Hard to tell, but the whole energy in that scenery fits the album’s vibe in lots of ways.

With their sixteenth foray into the genre they helped establish in the collective metal consciousness, “The Sick, the Dying… and the Dead!” serves as the album opener. The title track serves as an underwhelming but all-too-familiar introduction, kicking things off with galloping, ’90s-era thrash. Thankfully, “Life in Hell” quickly shifts things into a higher gear, unleashing a furious barrage of solos that could awaken the dead. On the fierce “Night Stalkers,” one of the album’s best examples of the Mustaine School of Ropey Lyric Writing, every-genre-frontman Ice-T makes a terrific, though brief, appearance. The scary “Dogs of Chernobyl” introduction flows into a huge, monstrously heavy beast of a track that will undoubtedly become a fan favorite, supporting it in a spectacular manner.

While “Junkie” requires a self-reflective moment from Mustaine, the stuttering “Sacrifice” falls into the center of the pack and seems soft even without the high-octane lead-in. “Psychopathy” lingers in the slow lane for a little while longer before the foot drops again. “Killing Time” then propels more traditional frenetic riffs and pounding drums into the interminably catchy “Soldier On!” which practically bounces into the thumping “Célebutante.”

It might take a few listens to get used to “Mission To Mars,” but the honest, innocent awe of the song’s message paired with Mustaine’s ragged low tones is refreshing nonetheless. The album’s closing track, “We’ll Be Back,” turns up the thrash and features some of the best instrument work from all parties on the entire record. It also plays the intriguing dual role of being both the album’s first single and a confident declaration of its title.

Even by Megadeth’s standards, the album is tense and impatient. It reaffirms the band’s place as absolutely necessary metal deities who continue to perform at a level of quality most of their contemporaries have fallen from decades ago.

Load more
Tags
Megadeth
Ikedichim Chibundu Follow on Twitter September 5, 2022Last Updated: September 5, 2022
Check Also
Close
Load more
Back to top button
Close
We use cookies on our website to give you the most relevant experience by remembering your preferences and repeat visits. By clicking “Accept”, you consent to the use of ALL the cookies. In case of sale of your personal information, you may opt out by using the link .
Cookie settingsACCEPT
Manage consent