This is the soundtrack album to Netflix’s “Purple Hearts.” The album features the original songs from the movie co-written and performed by Sofia Carson who also stars in the lead role. Purple Hearts stars Sofia Carson as Cassie and Nicholas Galitzine as Luke. 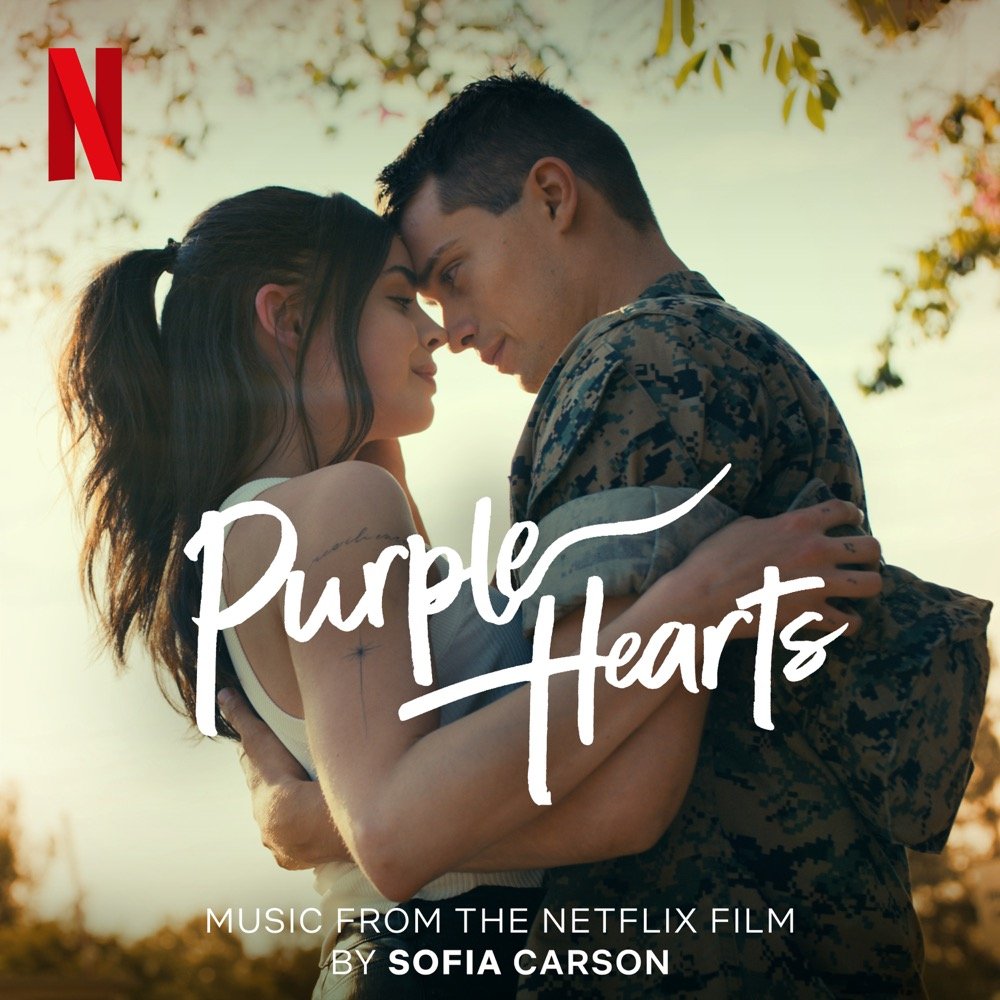 A couple that appear to be so in love is photographed locked in a warm embrace, set in the scenario of a cool evening with nature and the setting sun coloring the tones in the background. Very suiting for the heavy lovey vibes encased in every track on the album.

Gentle chords from the strumming of an acoustic guitar open the floor on the pilot track, “Come Back Home.” The strings make it an easy entry for when Sofia comes in with her ever serenading, raspy vocals. When the drums jump into the mix, Sofia had already started opening up her heavy heart, singing about an awkward situation with a lover, where they both care about each other but somehow can’t seem to figure their shit out. This is that song you play when you’re in your feels and terribly miss your lover. All the emotions were well conveyed through her vocal delivery and lyrics. A really good song, best believe.

Track 1 in a lot of ways set the tone for “I Hate The Way” which comes in at track number 2. There is just something captivating about the texture of Sofia’s voice that just immerses you into the wordings of her songs. You just immediately start feeling just how she felt recording this song as she narrates a kinda funny ordeal with a love interest who she admires to the moon and back and can’t even stand because…weak knees. That. She hates that…in a kinda cute way. Another thing she hates is the way the love interest in question wouldn’t just admit the feeling to be mutual when things are pretty obvious. The way the song switches up to a rock vibe toward the end was simply lit.

Giving a crazy dose of positivity and motivation on “Blue Side of the Sky,” Sofia sings her heart out with vigour while holding hope for that shining future that she has already visualized in her head. She points out that there is some pressure from people that are busy telling her she is “burning on false hope.” Clearly, she pays them no mind. How badly she sees herself in her visualized future makes her go all the way, full speed with her eyes closed. One beautiful thing about this song is the effect of the harmonious blend of female vocals on the chorus and also on the background chant at the beginning of the song.

Giving us more reasons to love her even more, Sofia worked in conjunction with Cupid to always fire off an arrow that’ll make you fall in love with an imaginary lover when you hit play on “I Didn’t Know.” The beautiful lyrics of the song matching the energy of her voice was just top-tier shit. She tells us a little tale about an unforgettable lover of hers who sadly had to part ways with her for some reason. But her experience, from the way she sings it, will make you understand that she cherished every single second spent loving the person because she didn’t even think such feelings and encounters were real enough to happen to her. An amazing piece of music. Great composition.

“Feel It Still”, a cover to Portugal The Man’s song with the same title, starts off sultry and few lines later, diffuses into some sort of self-awareness that comes with a worthy dose of vulnerability. As she seeks peace, she also embraces herself and hopes that everyone that listens to this song feels a tad inspired. The beautiful vocals in the background often supporting the singer is another nice highlight of the song.

“How can I hurt when I’m holding you,” Sofia sings on the sensual “Sweet Caroline.” The song is one of appreciation for a lover whose touch felt like the taste of a cold plate of chocolate ice cream on a hot day or a sizzling box of chicken pizza after starving for hours. Okay, foodie alert, but you get the point. Sweetly, she sings about the tingling good times and memories created with her lover. Had that Owl City-type vibe in the beat toward the end. You just have to give it up for Sofia’s artistry and range.

The last two songs are beautifully-stripped versions of “I Hate The Way” and “Come Back Home.”

The many twists and turns of young, fragile love. Coming to terms with herself and letting her guard down to fully enjoy the feeling and experience that is love.

Dan Crean & Eren Cannata are the producers behind this OST album.

Load more
Tags
Sofia Carson
Ikedichim Chibundu Follow on Twitter August 2, 2022Last Updated: August 2, 2022
Check Also
Close
Back to top button
Close
We use cookies on our website to give you the most relevant experience by remembering your preferences and repeat visits. By clicking “Accept”, you consent to the use of ALL the cookies. In case of sale of your personal information, you may opt out by using the link .
Cookie settingsACCEPT
Manage consent