Multitude stays true to its name. Stromae explores various topics whilst retaining his humility which in the age of over the top observational takes is a mean feat. What shines on this record is its danceability. The album could be played to a square of European cafés or thousands in an opera hall.

Without saying music is universal, this French-language LP can be enjoyed for its quirky elements as well as its more trendy moments. Infectious melodies are paired with Stromae’s smooth vocals. His spoken word moments give bigger tracks a moment of pause before launching into polished orchestral bridges.

Bursting with originality, Multitude is quite the resurrection of Stromae after a rest period. The reflections he’s collected and the experimentation he’s done with his sound has done wonders. A record that uses choral, electronic and orchestral features to embellish Stromae’s creativity, Multitude is crafted to be enjoyed again and again.

Stromae is dressed in an old-fashioned stripe suit and a hat to go with. But we notice that Stromae is alone but not alone. His image is split into five, one of them being the original copy. Considering the album title, the cover artwork starts to make sense.

Since it is the same person in all split images, it would easily suggest that Stromae is referring to his many hidden personalities as “Multitude”. But instead of looking disorganized or at war with each other, all characters seem to be working together for a common goal. Furthermore, they are in agreement down with their outfit choices.

But then again, it’s hard to tell if they’re clustered in that manner and looking up in anticipation of something or person that they have long looked forward to, or if they’re that way and getting set to take off for an unknown, top-secret mission above ground.

“Multitude” contains twelve tracks and zero features. Opener’ Invaincu’ is a powerful track about survival, powered by triumphant beats: “as long as I’m alive,” Haver sings, “I’m undefeated”. Meanwhile, the squeaky synths of ‘Santé’ see Stromae raising a glass to the under-appreciated and underpaid essential workers that carried on throughout the coronavirus pandemic.

Throughout ‘Multitude’, Stromae frequently plays with character (the bubbling rage of ‘Fils De Joie’ sees Haver taking on the role of the son of a sex worker), but it’s never cartoonish.

Instead, tracks like the deliberate ‘Déclaration’ explore gender roles in parenthood (“It’s still a better deal to be a bastard than a slut”) while the vulnerable cinema of ‘L’enfer’ balances depression and loneliness with knowing he’s not the only one who sometimes feels that low.

As intricate and affecting as the wordplay is, you don’t need to speak French to feel the emotional heft Stromae loads into each of ‘Multitude’s tracks. The vocals are as limber as the glitching, swaying soundscapes, and the whole album is a mesmerizing listen that constantly surprises.

It even ends with a glass-half-full banger ‘Bonne Journée’, which sees Haver choosing joy. “C’est que du bonheur” (“Nothing But Joy”) characterizes Stromae’s affection for his young son—a love that he sings saved his life.

Stromae’s slinky arrangements and actorly charisma are rich with charm. He sings “C’est que du bonheur!” with deranged euphoria as if expiring from sleepless nights mid-sentence. The four-bar charango refrain is ticklish and light, although the tempo accelerates and stabilizes the vicissitudes of parental joy unpredictably.

Stromae delicately folds these sounds into the melodic percolations that glitter beneath each song and also plays on their characters: The erhu that weeps through the knocking chimes of “La solassitude” is as off-kilter as the titular portmanteau (Stromae translates it as “Loneweariness”) and brings real pathos to what might otherwise be a risible tale of a guy who goes through the motions in relationships without ever connecting.

Stromae’s primary theme on this album is care—and how humans use and abuse one another as they seek comfort and turn a blind eye to inconvenient truths if it means getting what we want.

He embodies these fables through a litany of rogues, often told with piercing humour: The cheating prick of “Mon amour” tries to justify his infidelities because deep down, “tu les aimes bien les connards” (“you’ve got a thing for bastards”), but he’s left stunned and insecure by rejection.

On “Santé,” those quickest to toast pandemic heroes are the ones throwing fits at service workers who don’t meet their impossible expectations. “Fils de joie” (“Son of a Hero”) tells three grimy stories of proprietorial relationships to a sex worker, as told by a client, a pimp, and a police officer, each spliced with affecting, proud cries of defence from her son.

Stromae is not exempt, either: On “Déclaration,” he empathizes with his wife (designer Coralie Barbier) for having to bear kids and the mental load. Fatherhood really does change a man.

Tags
Stromae
Ikedichim Chibundu Follow on Twitter March 15, 2022Last Updated: March 31, 2022
Check Also
Close
Back to top button
Close
We use cookies on our website to give you the most relevant experience by remembering your preferences and repeat visits. By clicking “Accept”, you consent to the use of ALL the cookies. In case of sale of your personal information, you may opt out by using the link .
Cookie settingsACCEPT
Manage consent 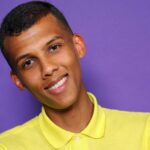