Every now and then, we get into our feelings where we don’t want to rock club songs or listen to anything except our thoughts. In such moments, the only external properties not immediately repelled by our being for intrusions are sounds complementary to our feelings. These sounds often compound our sorrows, but at other times, they help us find deeper meanings to our sorrows.

They also help us embrace them and see the sad days as days that are as normal as the good ones, and more importantly, the sad days have their purposes. They remind us that our feelings and thoughts are our own and that happiness and sadness have their places in the grand scheme. At other times, they remind us of the need to stay strong; sometimes, they help us decide to let go at the right moment. At times these songs come with a ray of hope; at other times, they come in a definitive tone of finality, reminding us, again and again, to choose between “eat, drink, and merry, but not too much for tomorrow you die” or to “cry, sulk, and wallow in your pains, for tomorrow you die” as a way of embracing the futility and vanity of life.

So if you’re a lover of truth, needing reasons or vehicles to travel this world in your thoughts and see life for what it truly is, then the list below is for you.

There’s no shortage of sad songs in the history of popular music. Artists tend to channel their sorrows into their work, leaving us with countless sad songs about everything from breakups to addictions to death. Here in this list of saddest songs presented in no particular order, I attempt to represent as many genres and as many reasons as possible.

This list is neither definitive nor exhaustive; it is merely presented based on available data and a deliberate choice to feature songs across different eras. So you might have others that have made you sit in the dark crying over nothing, but you would likely not find sadder songs than those on this list.

Hank Williams – ‘I’m So Lonesome I Could Cry

Hank Williams poured all the pain from his failing marriage to Audrey Sheppard into this masterpiece three years before he died. During his brief life, Williams created hundreds of songs and had several major hits, but this is one of the few that you still hear all the time, decades later. That’s because the message is universal, and his raw agony is unavoidable. Since then, everyone from Elvis Presley to Johnny Cash to Yo La Tengo has covered it.

Jim Reeves – Across The Bridge

Posthumously released in 1995, “Across the bridge” was an all-time classic from Jim Reeves, who lived a short but beautiful life. Although religious in its tone, this is a song where Jim confesses the life he’d lived but also hopes for a final redemption beyond the grave. It’s a powerful song that reminds the listeners of life after now and the need to live now to prepare for the future. To some, this might not be a sad song because Jim did write a couple of others that could rank higher than this one, but this one appeals to a much larger audience. Unfortunately, as is the trademark of a handful of artists on this list, Jim Reeves died tragically in a 1964 plane crash at 41.

War veterans who have been injured in battle and heroin addicts provide excellent material for sorrowful songs. When John Prine united them in his hit song “Sam Stone” in 1971, he accomplished a rare feat. It’s about a Vietnam War soldier who comes home with a smack addiction. To support his habit, he eventually resorts to robbery. “There’s a hole in daddy’s arm/ Where all the money goes/ Jesus Christ died for nothing/ I suppose,” sings the chorus, which is one of the saddest in music history. After “blowing his last balloon” in a “chamber that smells just like death,” he dies at the end.

Nirvana – Something in the Way

This slow ballad recounts Kurt Cobain’s supposed time sleeping under a bridge in Aberdeen, Washington. Nirvana recorded the track solo and acoustic, and the rest of the band later cut their parts. Rarely has Kurt sounded this vulnerable and raw. The version on MTV Unplugged is even more intense.

Dido tells the story of the lifeless life of a passenger in this song that reflects the futility of human life. The music is so intense that it could instantly make a rather blossom plant die at first listen.

Here, Dido recounts tales of dreams that are long dead and the ones that will never be fulfilled, but this time the storyteller accepts that they deserve nothing more since they own nothing in the world. The finality in the tone is quite upsetting, and the advice of trading the life may be to gain a thing or more out of life.

Clapton and songwriter Will Jennings wrote “Tears in Heaven” as a tribute to Conor Clapton, Eric Clapton’s son, who died in a fall from the 53rd storey of a New York building in 1991 when he was only four years old. They reportedly had no idea it would become such a big hit, but it was Number Two on the Hot 100 within months and swept the Grammys. The song first appeared on the soundtrack of the Jason Patric film Rush, although most people are familiar with Clapton’s version from his 1992 Unplugged event. Clapton stopped the song in 2004 after he could no longer bear to sing it at his gigs due to the overwhelming effects of the emotions attached to the song, but by 2013, he picked it up again.

Before “Everybody Hurts,” there weren’t many R.E.M. songs with a clear message. “The One I Love” is an anti-love song, “Gardening at Night” is perplexing, and “Losing My Religion” is still a mystery to us. But the message of “Everybody Hurts” is evident in the title. The famous video of melancholy people stuck in traffic was shot in San Antonio, Texas. In 1993, MTV aired it constantly, making it one of R.E.M.’s most well-known songs.

Christina Perri was having a moment in 2011, and the same could be said for the world when they heard her single “Jar of Hearts,” which dropped before she had even landed a record deal. However, she soon gained a reputation for writing songs that make us both happy and sad while also gifting us with the most overheard wedding song of the decade, “A Thousand Years.” This song will get you in your feelings if you’re coming off a heartbreak.

Ordinarily a gospel singer, Michael W Smith wrote an all-time classic in this song. If you have ever invested so much in anything, a job, a relationship, a career only for the subject of your strength, adoration, and devotion to, upon its maturity, demand its freedom, to which you can do nothing but let go, then this is the song that captures that phase of life. While this song, according to Michael W Smith, was inspired by the thoughts of one day letting go of his daughter in marriage to start her own life, the song captures every other scenario of letting go unwillingly but necessarily. This song will make you rethink your past relationship, bless them for the experience, and maybe curse them for the pain and loss.

This ballad from Musgraves’ Grammy-winning Golden Hour album began as a message of encouragement to herself before transforming into its final version, which offers hope to others going through difficult circumstances. Musgraves adores it so much that she performed it during her grandmother’s funeral. The lovely promise of a rainbow hanging over their head, which symbolises better times ahead, contrasted with the image of someone clutching their umbrella in a struggle to protect themselves against the elements of life. Without plunging into the song’s sorrowful melody, we can’t hear the reminder that everything will be well. It’s like sitting in the rain and chasing the rainbow all at the same time when you listen to it.

Adele’s catalogue is designed to draw maximum tears out of its listeners’ eyes. No one makes you shed beautiful heartrending tears that shatter and heals you at the same time as Adele. Adele is not just a master songwriter; she has hacked the art, harnessing a bit of the soul of everyone that listens to her songs, such that the music instantly becomes yours the moment you hear it. “Someone like You” is a masterpiece for all who are heartbroken; it helps them appreciate the pain and not hold back. You won’t find a better song that acknowledges the pain in heartbreak, respects the essence, confesses the nostalgia, and renounces the guilt while holding on to the happy memories.

I couldn’t decide which to leave out, so I have decided to leave both songs, which are very much the two sides of a coin on this list. While Fix You is a song that mourns the loss of life and death and everything in between, “Everglow” is a heartrending song that mourns the loss and the aftermath. It is the song that captures the expression, my expression, that “the pain of death is only felt by the living; so in every death and every loss, the living loses two things: the dead and a bit of self”.

So there goes our list of 12 saddest songs of all time. It’s rather unfortunate we couldn’t find a place for the queen of the sad songs in the 21st century, Billie Ellish, but you would agree she does deserve an honorary mention.

Tags
Adele Christina Peri Coldplay Dido Eric Clapton Hank Williams Jim Reeves John Prine Kacey Musgraves Michael W Smith Nirvana R.E.M
Olumide JokotadeJune 2, 2022Last Updated: January 3, 2023
Check Also
Close
Back to top button
Close
We use cookies on our website to give you the most relevant experience by remembering your preferences and repeat visits. By clicking “Accept”, you consent to the use of ALL the cookies. In case of sale of your personal information, you may opt out by using the link .
Cookie settingsACCEPT
Manage consent 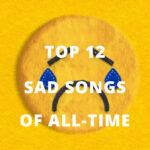