For the first time, Joe Alwyn has given details about co-writing songs with Taylor Swift, who happens to be his girlfriend.

Back in 2020, the actor and musician had contributed to the pop singer’s tracks “Betty,” “Exile,” and “Champagne Problems,” using the pseudonym William Bowery.

That same year, Taylor Swift had unmasked the identity of the co-writer. However, Joe failed to address it back then. It’s unclear why he didn’t speak about it at the time. But now he has, and fans are chuffed.

In an interview with Vulture, he noted that what happened was actually an accident. He was singing and messing around on the piano when Taylor Swift asked him to help her finish up. So they sat down and fired up something. He described the outcome as “basic.”

He may have described it that way, but it turned out fans actually did enjoy what the couple put together at the time.

Unlike most couples, Joe and Tayler aren’t particularly noisy about their relationships. They would rather keep their romance away from the public. All the same, the public has noticed them, and many people around the world readily pick their relationship as something to emulate. Can you beat that?

Tags
Joe Alwyn Taylor Swift
John Anusie Follow on Twitter May 10, 2022Last Updated: May 10, 2022
Check Also
Close
Back to top button
Close
We use cookies on our website to give you the most relevant experience by remembering your preferences and repeat visits. By clicking “Accept”, you consent to the use of ALL the cookies. In case of sale of your personal information, you may opt out by using the link .
Cookie settingsACCEPT
Manage consent 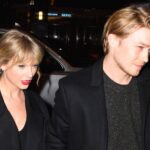