At DJ Khaled’s 47th birthday celebration, Diddy gave a moving statement in remembrance of his friend and fellow hip-hop entrepreneur. Diddy gave the speech to a small group of people on a stage in what looked to be Khaled’s garden in a video that also shows the God Did rapper dancing and getting doused with champagne.

“For real Khaled, I was trying to think about what I was going to say when I was giving you a toast and I was just like you’re one of the best friends a person can have,” said Diddy. “Your level of loyalty, your level of light, your fearlessness, your positive energy.”

Diddy praised Khaled for being “so lovely” and expressed his gratitude for their connection. Khaled’s friends have all made news in honor of his 47th birthday, not just Diddy. Khaled claimed that Drake’s gift of four opulent Toto toilets is one of the “best gifts” he has ever received.

On Saturday, Khaled displayed the special gifts on Instagram while outlining some of the most distinctive characteristics of the toilet: It has heated seats, the Tornado flush system, a UV-light cleaning system, an air deodorizer, a bidet function, and remote control operation.

Khaled continued by claiming that he plans to get the toilets in his private bathroom, the public restroom, the cinema room, and the studio, with the last one being allocated just for Drizzy.

Tags
Diddy DJ Khaled
Ikedichim Chibundu Follow on Twitter November 28, 2022Last Updated: November 28, 2022
Back to top button
Close
We use cookies on our website to give you the most relevant experience by remembering your preferences and repeat visits. By clicking “Accept”, you consent to the use of ALL the cookies. In case of sale of your personal information, you may opt out by using the link .
Cookie settingsACCEPT
Manage consent 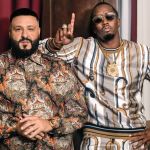