According to reports, Madonna paid millions of dollars to fly her loved ones to Italy to celebrate her 64th birthday.

On August 16, the singer of Material Girl turns 64. She has spent time getting ready for an opulent party at the Palazzo Castelluccio in Sicily, Italy. To commemorate her son Rocco’s 22nd birthday, she traveled to the stunning nation with her kids.

A source disclosed: “As with every birthday, Madonna will host an epic party, but this year will be particularly special. The palace is nothing short of spectacular. I can only imagine she has blown tens of thousands on the evening. But when you’re worth £700million, money isn’t an issue.”

The singer intended to have supper and drinks “outside under the Mediterranean sky with a live band,” the source told The Sun. The celebrity prepared for a once-in-a-lifetime event that she was hosting at the magnificent 19th-century palace in Noto.

The pictures show Madonna and her kids, including Rocco, David Banda, Mercy, Stelle, and Estere, enjoying a live band while seated at a gorgeously arranged table in the garden. In addition, Rocco cut a birthday cake in the form of a leather bag. The singer recently stunned her 18.4 million Instagram fans by brazenly posing in another another of her distinctive tiny ensembles.

Tags
Madonna
Ikedichim Chibundu Follow on Twitter August 16, 2022Last Updated: August 16, 2022
Check Also
Close
Back to top button
Close
We use cookies on our website to give you the most relevant experience by remembering your preferences and repeat visits. By clicking “Accept”, you consent to the use of ALL the cookies. In case of sale of your personal information, you may opt out by using the link .
Cookie settingsACCEPT
Manage consent 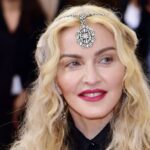 For Her 64th Birthday Celebration In Italy, Madonna Splashes Tens Of Thousands Of Dollars