This week, Hip-Hop honored the memory of a fallen rap hero, as the death anniversary of the late Christopher Wallace, better known as The Notorious B.I.G was commemorated. Exactly 25 years ago yesterday, March 9th, Biggie was shot and killed during a drive-by in Los Angeles, and for 20 years and counting, the world continues to dearly remember the late rapper and his rare talents.

Biggie will always go on to be praised as one of the greatest rappers to ever do it, as his records have spawned into classics. And so in the anniversary’s honor, Faith Evans relayed memories of her former hubby. Although the pair had a marriage relationship from 1994 until ’97, when the rapper departed earth, their relationship hit some rocks toward the end, but they still remained cordial, regardless.

“Although we were separated, we had a five-month-old baby,” she told PEOPLE. “And it was obviously so unexpected. We didn’t know or expect that to happen. We definitely felt like, ‘OK, come back home,’ just because of all the little weird things that were being whispered and things that happened prior to his death.”

“I remember B.I.G. every day,” Faith said, adding that she hangs with Junior M.A.F.I.A. sometimes to sit and have some good laughs as they trade tales of their fond times with the late rapper.

Tags
Faith Evans The Notorious B.I.G
Ikedichim Chibundu Follow on Twitter March 10, 2022Last Updated: March 31, 2022
Check Also
Close
Back to top button
Close
We use cookies on our website to give you the most relevant experience by remembering your preferences and repeat visits. By clicking “Accept”, you consent to the use of ALL the cookies. In case of sale of your personal information, you may opt out by using the link .
Cookie settingsACCEPT
Manage consent 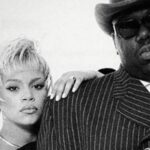 Faith Evans, Wife Of The Late Biggie, Remembers Him Fondly On 25th Anniversary Of His Death