Country Hall has announced the induction of a trio of legends into its Country Music Hall of Fame. The announcement made Tuesday morning by long term Hall of Famers Ronnie Dunn and Kix Brooks is coming after the last batch of legends were formally inducted into the legendary and exclusive class.

The latest trio of honorees include Jerry Lee Davis, late country star Keith Whitley, and Joe Galante have been selected to represent different categories from the pool of potential inductees.

Accepting his induction, 86-year old Lewis gets into the Hall as a representative of the Veterans Era Artist category, expressing his joy at finally making it into the Hall. He further thanked his fans while advising other artists to always treat people, especially their fans, right. Upon his induction into the Hall of Fame, Lewis became the latest in an exclusive list of icons inducted into both the Rock and Roll Hall of Fame and the Country Music hall of Fame. Elvis Presley, the Everly Brothers, Ray Charles, Johnny Cash, Hank Williams, Jimmie Rodgers, Bill Monroe, Bob Wills, Brenda Lee, Floyd Cramer, and Sam Philips are the other artists who enjoy the same exclusive privilege.

Keith Whitley, represented at the ceremony by his widow and fellow country star, Lorrie Morgan, is posthumously representing the Modern Era Artist category. A place in the Country Hall of Fame is the latest in a long list of honours which Whitley has posthumously received since his death in 1989 at age 34.

Described as a “game-changing executive from the urban Northeast” by Country Music Hall of Fame CEO Kyle Young, Joe Galante comes into the Hall as an accomplished business executive from the Non-Performer category. Receiving his nomination, Joe Galante expressed his pleasant surprise at being inducted into the famed exclusive class of music icons.

The official induction ceremony will take place in October 2022.

Tags
Jerry Lee Lewis Joe Galante Keith Whitley
Olumide JokotadeMay 18, 2022Last Updated: May 18, 2022
Check Also
Close
Back to top button
Close
We use cookies on our website to give you the most relevant experience by remembering your preferences and repeat visits. By clicking “Accept”, you consent to the use of ALL the cookies. In case of sale of your personal information, you may opt out by using the link .
Cookie settingsACCEPT
Manage consent 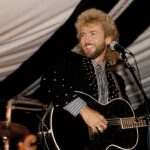