On Sunday night, Eminem paid respect to the late Pat Stay on Twitter by referring to him as one of the greatest performers ever. In Fairfax, Nova Scotia, earlier in the day, the renowned battle-rapper was fatally stabbed. “Hip Hop lost one of the best battlers of all time,” wrote Eminem. “RIP @patstay … KINGS NEVER DIE!!” 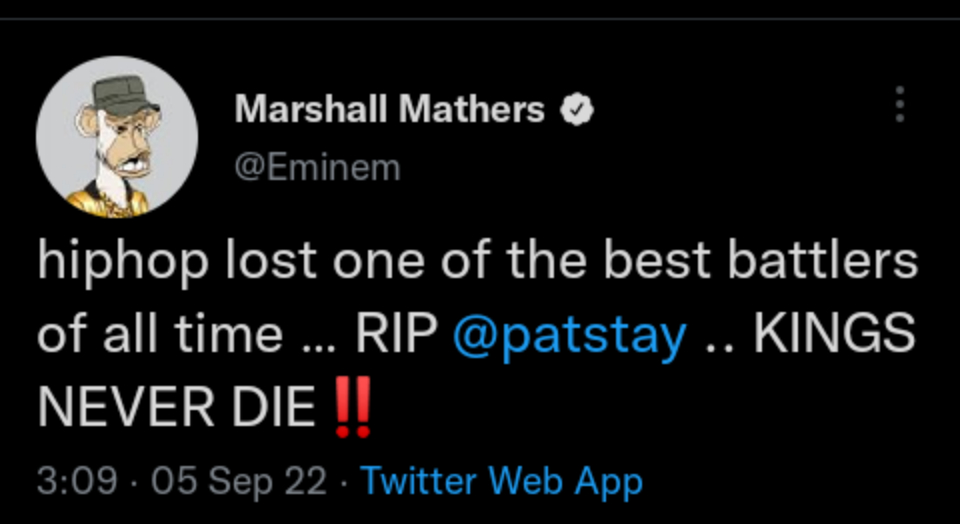 According to accounts, the stabbing happened at 12:36 AM in the 1600 block of Lower Water Street. After being transported to a neighboring hospital, Stay passed away from his wounds at the age of just 36. The victim of the stabbing was not publicly recognized by Halifax Regional Police, but Stay’s brother, Peter, stepped forward to confirm his demise to CBS News.

The police did not say what might have caused the stabbing or whether there were any witnesses. A probe is still being conducted. In the midst of his conflict with The Game, Stay had recently defended Eminem. Stay made a social media post in response to the latter’s diss song, “The Black Slim Shady.”

“I gotta say, as a fan losangelesconfidential its been hard to watch you desperately begging for @eminem attention trying to battle him. Trust me, I respect the hunger, but once you start that whole ‘he only blew up because he’s white’ type sh*t it comes off more hater-ish than competitive.”

Tags
Eminem Pat Stay
Ikedichim Chibundu Follow on Twitter September 5, 2022Last Updated: September 5, 2022
Check Also
Close
Back to top button
Close
We use cookies on our website to give you the most relevant experience by remembering your preferences and repeat visits. By clicking “Accept”, you consent to the use of ALL the cookies. In case of sale of your personal information, you may opt out by using the link .
Cookie settingsACCEPT
Manage consent