Yesterday, February 23rd, WWE 2K22 went public with the information that Machine Gun Kelly will be executive-producing the 2K22 soundtrack, together with being a playable character. Now the full tracklist has been made available.

Machine Gun Kelly sets the new soundtrack rolling with two tracks, “Concert for Aliens” and “Body Bag”, with help from YUNGBLUD and Bert McCracken, closely followed by Wu-Tang Clan’s classic, “Protect Ya Neck” and “Iron Fist” from Motorhead. Then we get a some NXT juice in the form of “Poppy’s Say Cheese”, this time being the live version that was performed on NXT.

Next in line is Royal Blood’s “Typhoons” and Bring Me The Horizon’s “Happy Song”, followed by The Weeknd’s “Heartless”. Coming after that is Turnstile’s “I Don’t Wanna Be Blind” and Asking Alexandria’s “The Final Episode (Let’s Change the Channel)”. And before the curtain fall comes KennyHoopla’s “Hollywood Sucks”.

Below is the tracklist carefully hand-picked by MGK:

Tags
Machine Gun Kelly WWE 2K22
Ikedichim Chibundu Follow on Twitter February 24, 2022Last Updated: March 31, 2022
Check Also
Close
Back to top button
Close
We use cookies on our website to give you the most relevant experience by remembering your preferences and repeat visits. By clicking “Accept”, you consent to the use of ALL the cookies. In case of sale of your personal information, you may opt out by using the link .
Cookie settingsACCEPT
Manage consent 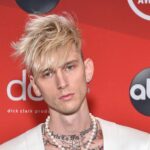