‘mainstream sellout’ is driven by a relatable sense of angst, and its outsider anthems will continue to speak to the millions who see Machine Gun Kelly as the saviour of punk rock. For better or worse, Baker makes no attempts to convert those who still doubt him.

‘mainstream sellout’ finds its author still refusing to play by the old rules, though it inevitably lacks the shock of the new that made …’ Downfall’ so exciting. Still, it seems that, like the pop-punk revival itself, Machine Gun Kelly won’t run out of steam any time soon.

Here he teams up with producer Barker (who also co-produced the album’s predecessor). The snotty aggression of the record’s opening track sets the pace for what’s to come – confessional lyrics set against urgent guitar riffs thundering drums.

Colson’s ‘mainstream sellout’ is a look inside the effects of fame and celebrity culture and probably sounds cheap on the surface. However, the album carefully selects the best of that record and pairs that style to what’s hyping up the TikTok trends.

But, amidst the musical diversity (or lack of, however you want to see it) is the real emotion and struggle of a life that’s been plummeted in the lit-up streets of Hollywood, California. 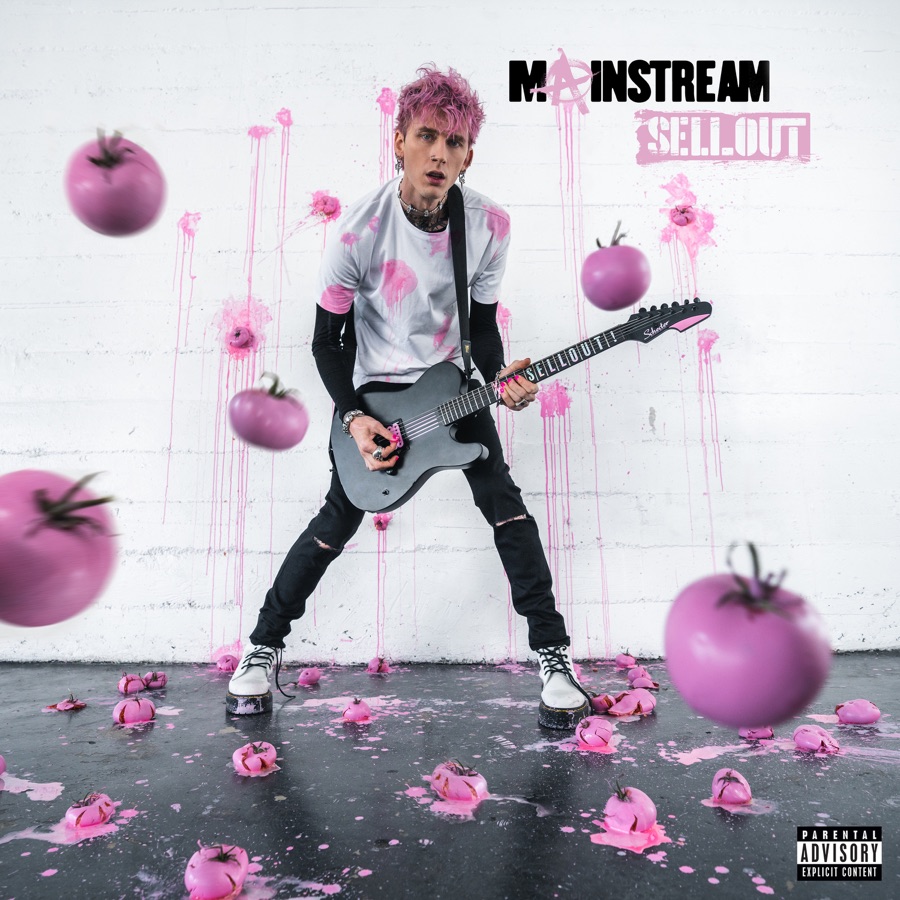 The rapper-turned-rockstar is on stage in his rockstar-esque outfit, strumming a guitar with a face of a surprising and disappointed person. Almost like he took to stage with the mindset that the crowd would be swayed by his performance which he seemed pretty prepped for.

He mounts the stage and begins his performance, passionately strumming his guitar, but instead of loud cheering and applause and maybe sing-alongs from the crowd, they start hurling fruits at him that come crashing onto the floor of the stage and staining his outfit.

Considering the album title compared to what is going on in that cover artwork, it’s clear that what is at play is ironic. He is depicting the exact opposite of his reality: a “mainstream sellout”.

mainstream sellout comes with 16 tracks, out of which 7 are featured tracks, with Lil Wayne making an appearance on two tracks. Other featured artists include Bring Me The Horizon, blackbear, WILLOW, Iann Dior, Gunna, Young Thug, and Landon Barker.

The frustrated ‘God Save Me’ sees him talks plainly about the death of his parents, aborted suicide attempts and how the media’s constant gaze plays havoc with his “mental imbalance” without losing any of the scene’s famed buoyant energy.

Elsewhere, the Bring Me The Horizon-featuring ‘Maybe’ is a sleek chunk of nihilism that combines arena ambition with a curled-lip moodiness, while ‘5150’ – named after the California law code for the temporary, involuntary psychiatric commitment of individuals who present a danger to themselves or others due to signs of mental illness – sets self-hatred against hook-driven riffs.

mainstream sellout finishes with a lighthearted, emotional touch. ‘Sid & Nancy’ has that pop/rock element shining bright, while ‘Twin Flame’ feels like a love song dedication to fiance Megan Fox. It’s a loving gesture to romance that closes out magnificently with the addition of one last hurrah from Travis behind the drums in a thumping rock solo, seeing the duo bow out this record in top form.

Throughout the album, Baker wrestles with his demons for all to see. At this point, he doesn’t care very much what he perceives. Instead, he seems more invested in his personal struggles with different sides of his existence. Yet, somehow he also manages to catch some fun still while going through it.

Load more
Tags
Machine Gun Kelly
Ikedichim Chibundu Follow on Twitter March 25, 2022Last Updated: March 31, 2022
Check Also
Close
Back to top button
Close
We use cookies on our website to give you the most relevant experience by remembering your preferences and repeat visits. By clicking “Accept”, you consent to the use of ALL the cookies. In case of sale of your personal information, you may opt out by using the link .
Cookie settingsACCEPT
Manage consent