Wild ‘N Out, a restaurant concept fleshed out by entertainment mogul, Nick Cannon, has opened its new two-story, 3,500-square-foot Gaslamp location on Friday.

The entertainer and television personality and graduate of Monte Vista High in Spring Valley, class of ’98, will be hosting the grand opening of the bar and club, inspired by MTV’s “Wild ‘N Out,” Viacom’s longest running comedy show going as far as its 18th season. He first introduced the concept four years ago in Miami, later expanding the eatery in March 2020, when the pandemic struck. The original restaurant, however, is now listed as “temporarily closed.”

Cannon tags the new location as an “eatertainment” destination that comes with a classic American menu, including chicken sandwiches, burgers, seafood, oversized boozy drinks, a variety of sports-themed arcade games and a bunch of televisions for the purpose of big-game viewing. The indoor/outdoor area also displays murals by pop artist, Rob Prior, that pay tributes to several hip-hop legends.

Like those adornments did not do enough justice, Wild ‘N Out will also be featuring regular performances by comedians and DJs, with surprise appearances from Cannon himself and the Wild ‘N Out crew. The new business establishment would also come with several weekly themed nights and specials, which would be including Industry Mondays, for the hospitality industry and Hip-Hop History Wednesdays, with DJs churning out hip-hop tracks on the turntables.

Tags
Nick Cannon
Ikedichim Chibundu Follow on Twitter February 26, 2022Last Updated: March 31, 2022
Check Also
Close
Back to top button
Close
We use cookies on our website to give you the most relevant experience by remembering your preferences and repeat visits. By clicking “Accept”, you consent to the use of ALL the cookies. In case of sale of your personal information, you may opt out by using the link .
Cookie settingsACCEPT
Manage consent 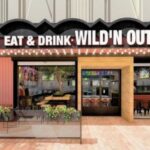