The newest EP from Lil Uzi Vert, Red & White, features some of his best songs since 2020. He’s obviously moved past the Eternal Stake sound, as evidenced by the fact that this is a new path heading to his Pink Tape album, which is scheduled to be released later this year.

Here, there are two different types of music. You have your angry, upbeat music and your relaxed, mellow tracks. There are some extremely fantastic rhythms on this, similar to those in Final Fantasy, despite the average quality. Uzi’s quick flow, which he frequently exhibits on this page, is one of the great aspects of his rapping.

It’s a vibrant little tape that he released to kick off the release of his upcoming album. Red & White definitely contains some bangers, and it’s almost like a comeback for him given that many of his fans weren’t all that impressed with his most recent projects and snippets. 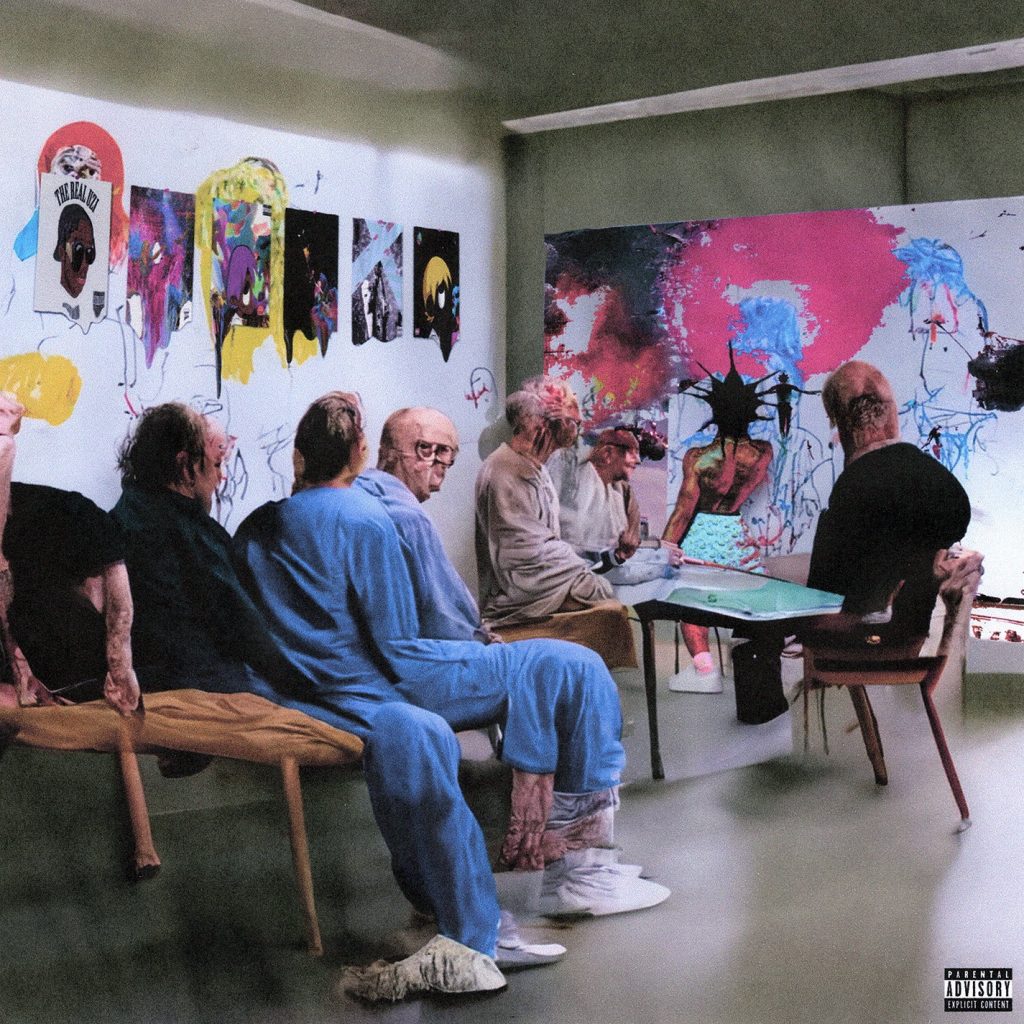 Set in an art galleria of various colorful paintings smeared on the the wall, Uzi is right before a lifesize painting of which he appears to be partly merged with, as humanoids in distorted form dressed in blue, black and grey outfits look intently at the large artwork before them.

But taking another look at the paintings plastered there on the left-hand corner of the room, you would notice that those aren’t just random works of art. They are Uzi’s past releases, and with what is in front, it could only mean that his future record(s) would be bigger than past records, and somehow the Red and White EP sets the tone.

Kicking off with “Cigarette”, Uzi takes on a bunch of things at once. Over the slow but bouncy instrumental, he prides himself as the best there is. “Lil Uzi Vert is a one of one,” he raps on the chorus. He also touches on the way he ducks the jealousy he gets from folks and the rockstar life. Oh, and how cigarettes help with the drama. There is some braggadocio in the mix too, of course. It’s Uzi.

He keeps flexing his bragging rights on “For Fun” where he talks about his pricey assets and how he can never go bankrupt. The fun extends to his sexual dealings with different women and some talk about drugs. Basically he counts up the bandz for fun. Typical Uzi.

“Issa Hit” starts out a bit noisy with Uzi coming in with a few bars and then hyping things up before going in again with the first verse. But as…well, expected he goes off again with the same old braggadocio material and superstar lifestyle talk.

Things get hypothetically violent with a twist on “Glock In My Purse.” Uzi rolls in with a public service announcement to start the song. “You wanna know a secret?” he asks, before proceeding to let us in on the secret by saying, “I’m not from this earth, I never had a birth,” which frankly is Uzi’s style. Underneath the tough, egoistic external layer, Uzi decides to swerve into the vulnerable lane without notice! He goes on to talk about his low-key wonky relationship with his father while growing up and how things are going presently.

Like he caught himself slipping, his ego came back swinging on “F.F.”, the last track on the EP. And like its position on the project, Uzi finalizes things by inviting all his final fantasies that comprise of feeling himself and of course, more slick talk.

Basically, being carefree and expressive without reservations or inhibitions whilst briefly showcasing some vulnerability in the process.

Load more
Tags
Lil Uzi Vert
Ikedichim Chibundu Follow on Twitter July 27, 2022Last Updated: July 27, 2022
Check Also
Close
Back to top button
Close
We use cookies on our website to give you the most relevant experience by remembering your preferences and repeat visits. By clicking “Accept”, you consent to the use of ALL the cookies. In case of sale of your personal information, you may opt out by using the link .
Cookie settingsACCEPT
Manage consent