“Heroes & Villains,” a brand-new smash-hit album by Metro Boomin, has been released. After putting out his début album, Not All Heroes Wear Capes, in 2018, it’s notable to note that this is his first solo record in four years. The top hip-hop artists currently shaking up the game are featured on this album, as they deliver some of their wildest performances over some of the year’s harshest trap beats. The album’s sound cohesiveness and flow are faultless, and the numerous transitions and narration skits give it the sensation of a real event without ever letting the quality slip. 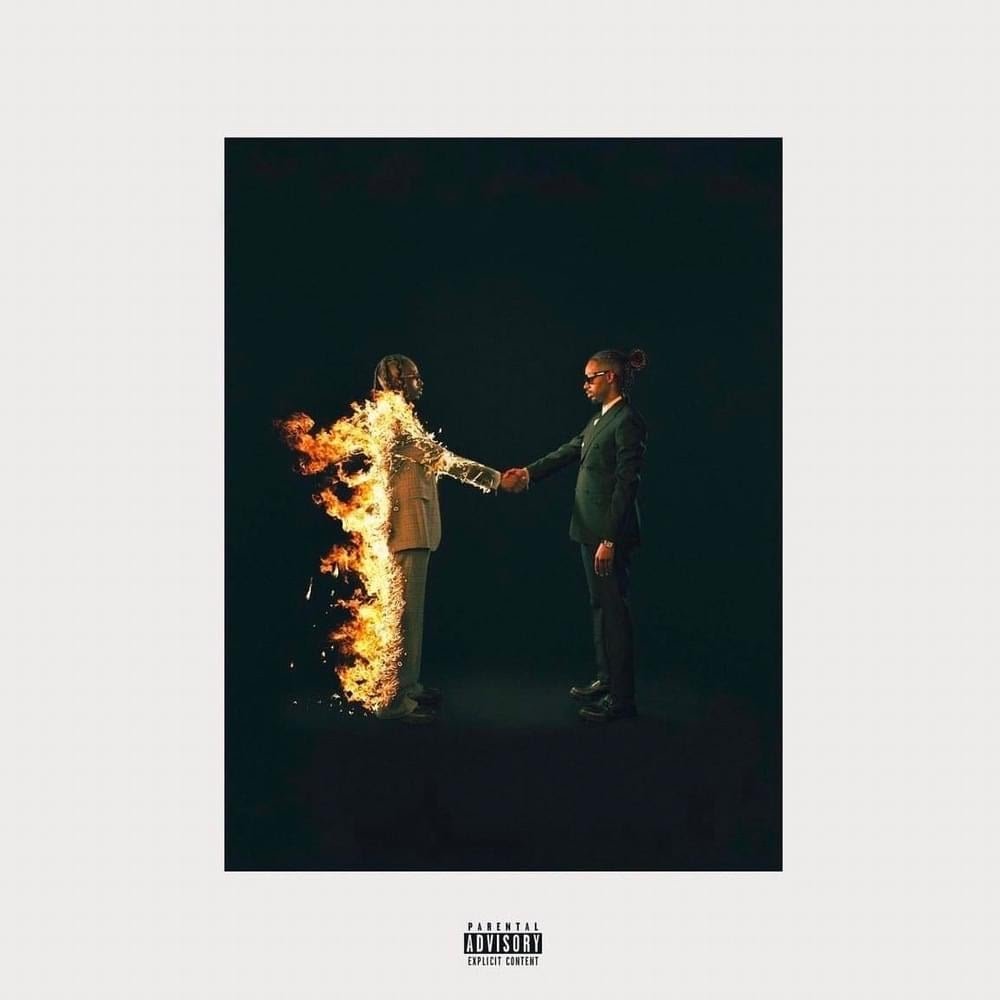 Two men can be seen shaking hands, but their appearances steal the show. The man coming from the left-hand side is half-man and half-fire from one angle. From another angle, the fire is only latching onto his grey suit like someone who casually walked out of fire, but who casually does that?

His calm demeanor will tell you that he and the fire are good friends as he appears unaffected shaking the hands of the man coming from the right who appears pretty collected but normal. At this point, it’s too easy to point at the who represents the Heroes and Villains. Could they be making peace?

The opening tune of the 15-track album, “On Time,” features John Legend and is delivered as one would expect from a top-shot feature. Morgan Freeman’s voice is also heard in it. Together with the well-arranged beats that feature beautiful piano and violinic chords, the backing voices do a fantastic job of bringing this track to life. Future and Chris Brown are featured on the second song, “Superhero.” The Trap beat is lovely, and Chris’s verse delivery on it is fantastic. The switch for Chris’s verse is nothing short of creative. The songs heavily feature sexually explicit content alongside street banter and local happenings.

The song “Too many Nights,” which features Don Toliver and Future, is mellow and catchy. The lyrics contain references to love, relationships, money, fame, and an admonition to “be what you want.” The track’s arrangement is commendable as Future’s verse continues to play till fade. Travis Scott’s vocals appear on “Raindrops.” The artist speaks of love, drugs, and his pain while giving a flawless performance. Travis loads his melodious train and offers the listeners over a smooth beat and groovy arrangement. The background support enters at the appropriate periods and completes the track’s essence.

Young Nudy and 21 Savage both appear on “Umbrella”. The introduction, which introduces the Trap beat, is pretty clever. Throughout the song, you’ll catch some showoff, slick talking and profanity. On the R&B-influenced Trap track, “Trance,” Travis Scott and Young Thug come through with their unique vocals. A indication that the song is “romance-themed” is intended by the sexual allusions and occasional profanity. When combined with the sporadic background singers, the piano chords are a fantastic fit and give this track a dreamlike quality.

“Creeping,” which also includes 21 Savage, introduces the weekend. The Weeknd’s voice enters and serenades to an interpolation of Mario’s “I Don’t Want to Know (Creeping)” playing in the background. The supporting singers in the background are excellent, and 21 Savage is simply amazing. In the lyrics, you can find references to themes like love, relationships, heartbreak, and dishonesty, among other things. Gunna is featured in the album’s final track, “All the money.” In addition to other topics, the lyrics touch on themes like grit, hustle, money, gangsterism, braggadocio, women, and drugs. The Trap beat is also smooth and beautiful. The track’s melodic tone is enhanced by the background singers, which also let the vocalist express himself. The tune concludes with the sound of a counting machine, bringing the listening experience to a close.

“HEROES & VILLAINS” is full with concepts, not all of which work. Contradictions are celebrated on this record, which reaches for the light while enclosing itself in the shadows.

Load more
Tags
Metro Boomin
Ikedichim Chibundu Follow on Twitter December 3, 2022Last Updated: January 3, 2023
Check Also
Close
Back to top button
Close
We use cookies on our website to give you the most relevant experience by remembering your preferences and repeat visits. By clicking “Accept”, you consent to the use of ALL the cookies. In case of sale of your personal information, you may opt out by using the link .
Cookie settingsACCEPT
Manage consent