Bruce Springsteen revealed intentions to embark on a North American tour with the E Street Band for the first time since 2016. Pretty thrilling However, some fans were noticeably less thrilled last week when they went online to the Ticketmaster website to purchase tickets.

Although prices for the Springsteen concerts fluctuated, some of the “platinum” tickets initially cost as much as $5,000. Ticketmaster’s “dynamic pricing” strategy is what led to such absurd costs, and the company is now making an effort to defend this outrageous new level of price gouging.

According to rumors, Ticketmaster will use “dynamic pricing” to drive away ticket brokers and websites like StubHub and SeatGeek. When tickets are on sale, Ticketmaster can charge a lot of money; however, if there are still tickets available after some time has passed, prices may decrease.

In essence, this indicates that Ticketmaster is reselling its own tickets. Although the practice has long infuriated ticket buyers, $5,000 for a Springsteen concert seems like an absurdly new height of insatiable greed.

According to Variety, Ticketmaster is now justifying the entire Springsteen fiasco by asserting that only 11.2% of the tickets for last week’s Springsteen concert were platinum, and that only little more than 1% were for $5,000 or more. Additionally, the website states that the typical Springsteen ticket cost $262, which is still pretty pricey but not as expensive as a used automobile.

Tags
Bruce Springsteen
Ikedichim Chibundu Follow on Twitter July 26, 2022Last Updated: July 26, 2022
Check Also
Close
Back to top button
Close
We use cookies on our website to give you the most relevant experience by remembering your preferences and repeat visits. By clicking “Accept”, you consent to the use of ALL the cookies. In case of sale of your personal information, you may opt out by using the link .
Cookie settingsACCEPT
Manage consent 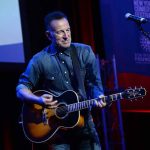 Bruce Springsteen: Ticketmaster Replies To Criticism In The Midst Of The “Dynamic Pricing” Debate