All Harry Styles fans can rejoice, as the Grammy Award-winning singer has just announced that his third solo album, “Harry’s House,” will be out on the 20th of May.

Not much was let out of the bag regarding the upcoming release in the official announcement save for the date, title, tracklist and of course, the album cover art, where the pop superstar can be spotted scratching his chin and standing on the ceiling of a living room that is upside-down.

Styles also shared a brief teaser clip with no new music but a synthesizer soundtrack, which showed him strutting onto a theatre stage, smiling as a house facade started coming up around him.

News of the upcoming album is not surprising, seeing as rumours had been flying that Styles would be promoting some new jams before he takes on the stage as a headline performer of the forthcoming Coachella fest on April 15 and 22.

Back in February also, he was seen shooting a music video in the streets of central London, but it has not really been verified if he would be dropping singles off the yet-to-be-released body of work or whether he has something entirely different in store.

Tags
Harry Styles
Ikedichim Chibundu Follow on Twitter March 24, 2022Last Updated: March 31, 2022
Check Also
Close
Back to top button
Close
We use cookies on our website to give you the most relevant experience by remembering your preferences and repeat visits. By clicking “Accept”, you consent to the use of ALL the cookies. In case of sale of your personal information, you may opt out by using the link .
Cookie settingsACCEPT
Manage consent 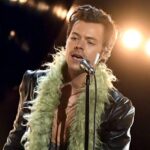 Harry Styles’s Third Solo Album, ‘Harry’s House,’ Due For Release In May