Nigerian sensation, Omah Lay, has decided to team up with America’s heartthrob, Justin Bieber, on an upcoming single that is titled “Attention”.

Since Omah Lay proved himself not to be a one-hit or one-hit EP wonder by releasing his second massive EP, “What Have We Done?” in 2021. The EP performed so well and did even better after his Ugandan jail stint with singer, Tems, when “Godly” blew up properly.

Not relenting, Omah went on to release “Understand” as a follow-up single in the same year. The song caught fire with the speed of light, peaking at number one in Nigeria and a few other countries. A certified hit. Now, riding the wave of that success, Lay has decided to kick things upbeat by inviting Justin Bieber for some assistance on his new song, “Attention”, scheduled for release this Friday.

Omah and the Biebs made the rounds on social media some last two weeks, when photos and some short behind-the-scene teasers went viral, further confirming the rumours of the collab. A few days ago, Lay sent out a tweet advising fans to purchase new headphones against Thursday.

Today on his Twitter page, he unveiled the cover artwork for the new single, alongside its release date. 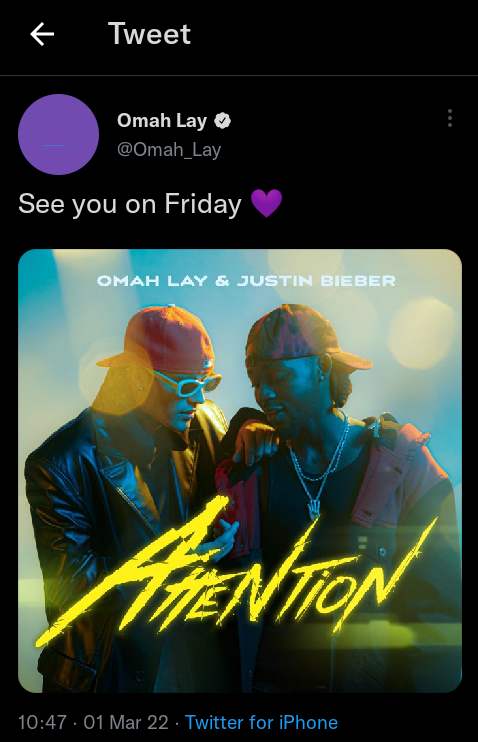