The highly anticipated “Original” is the fifth studio album by Ghanaian Highlife superstar Bisa Kdei. The 14-track album offers a unique take on Highlife music and a fusion of Afrobeats in a masterfully crafted work. Established acts like Stonebwoy, Sefa, Camidoh, Teni, and Memphis Depay are among the artists lined up on the album. Memphis Depay also showed off his musical prowess with some savage vibes. The album’s songs, such as “Love You” and “Kaakyire,” have already surpassed expectations because they have garnered a ton of radio recently, before the album was even released. 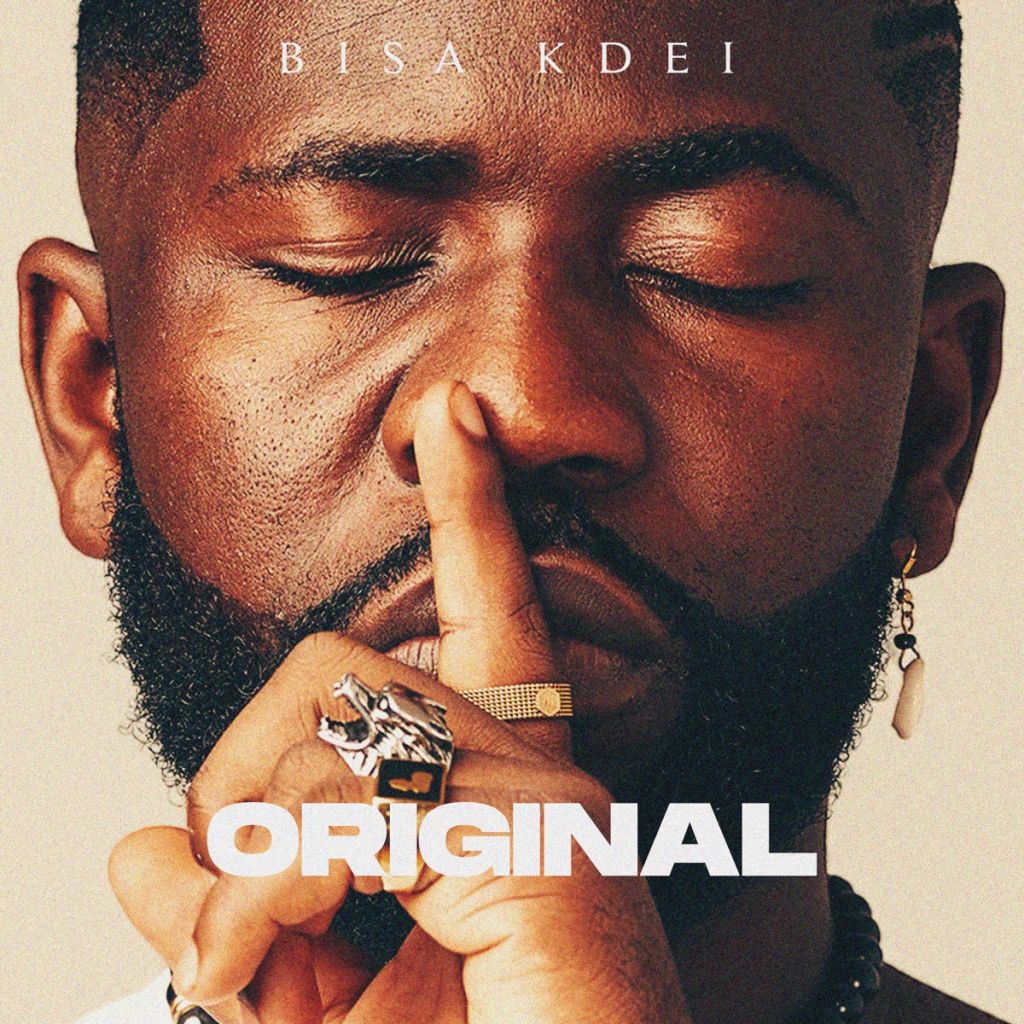 On this cover, Bisa is in a somber, reflective mood, expressed through his facial comportment and even down to the placement of his finger over his lips. The color toning also comes in clutch, highlighting the beauty of the African skin. Kdei is also adorned with some fancy trinkets; stylish rings on two fingers and a dangling eating hanging from one ear. Kdei appears to really be in his Original element.

The opening tune of Bisa’s 14-track album, “Next Chapter,” is a heartfelt performance by the artist. He talks about his setbacks while also being grateful for all the victories. He sings sublimely over the smooth hip-hop beat, admonishing that “nobody can take what belongs to you,” and giving thanks to his fans and staff. The following song, “Complete Man,” includes Camidoh. The pair sings about how their significant other makes them “a whole Man” and how their love for one other is so lovely and addictive. This track places a lot of emphasis on love and relationship-related themes. Highlife and conventional afro pop beat arrangements are used.

Memphis Depay, a football player and rapper, amazingly makes a compelling case for his musical career thanks to his well-delivered verse and the ease with which he moves through the afrobeat. Nearly all of the album’s tracks have love and relationship-related themes, which are evident in the lyrics. The delivery is top-notch ghana music, and the production is quite excellent. On the incredible song “One Day,” Teni and Bisa work together. As Bisa’s star power shines in this collaboration, Teni adds her flow and rhythm to the song. One of the album’s top songs is this one. Themes like endurance, hustle, belief and the capacity for dreaming and enthusiasm are prominent. Bravo to the production crew for this masterpiece.

The Stonebwoy-featured song “Party” is pure Afro-highlife. The song seems to advocate putting happiness first no matter what circumstances one finds themselves in. The guitar chords are incredibly lyrical and give the highlife mood an edge. “Too Much” is finished by Sefa and Bisa. The vocals of the duo are incredibly velvety, seductive, and sonorous as they communicate love. Some of the themes in the lyrics include love relationships and the need for accountability in a partnership. The couple appear to wonder if they are expecting too much from their partner for desiring to be loved fully.

The song “Love You,” featuring KiDi is the one you want to listen to when you are feeling particularly passionate about a lover. The peaceful vibe permeates the entire song as KiDi performs with ease. Additionally, Bisa nails his verses, and the duo make a love song sound stunning. In the album’s final song, “Over You,” Bisa declares that he hasn’t moved on from his ex. In his song, he talks about how the events that led to their breakup make him envious, especially when he sees her with someone else. The guitar chords are masterfully played to fade as the song puts an end to the ride on this love train.

The personal struggles of an artist and the good and bad experiences encountered on the journey of love.

Mix Master Garzy and other talented producers contributed to the album’s production.

Load more
Tags
Bisa Kdei Featured
Ikedichim Chibundu Follow on Twitter January 23, 2023Last Updated: January 23, 2023
Check Also
Close
Back to top button
Close
We use cookies on our website to give you the most relevant experience by remembering your preferences and repeat visits. By clicking “Accept”, you consent to the use of ALL the cookies. In case of sale of your personal information, you may opt out by using the link .
Cookie settingsACCEPT
Manage consent