The 10-track eighth studio album by Disturbed is “about 90% heavy as fuck” and “10% of caring, loving goodness,” according to front-man David Draiman. With such blatant puffery aside, the Chicago metallers’ most recent release is completely devoid of surprises which is kinda great for the band’s devoted fans.

Disturbed has developed a talent for writing powerful, radio-friendly songs that have changed little over time since the late 1990s. Disturbed have restated their claim to the contemporary metal throne, and “Divisive” will undoubtedly please their current fans while winning over a few new ones. 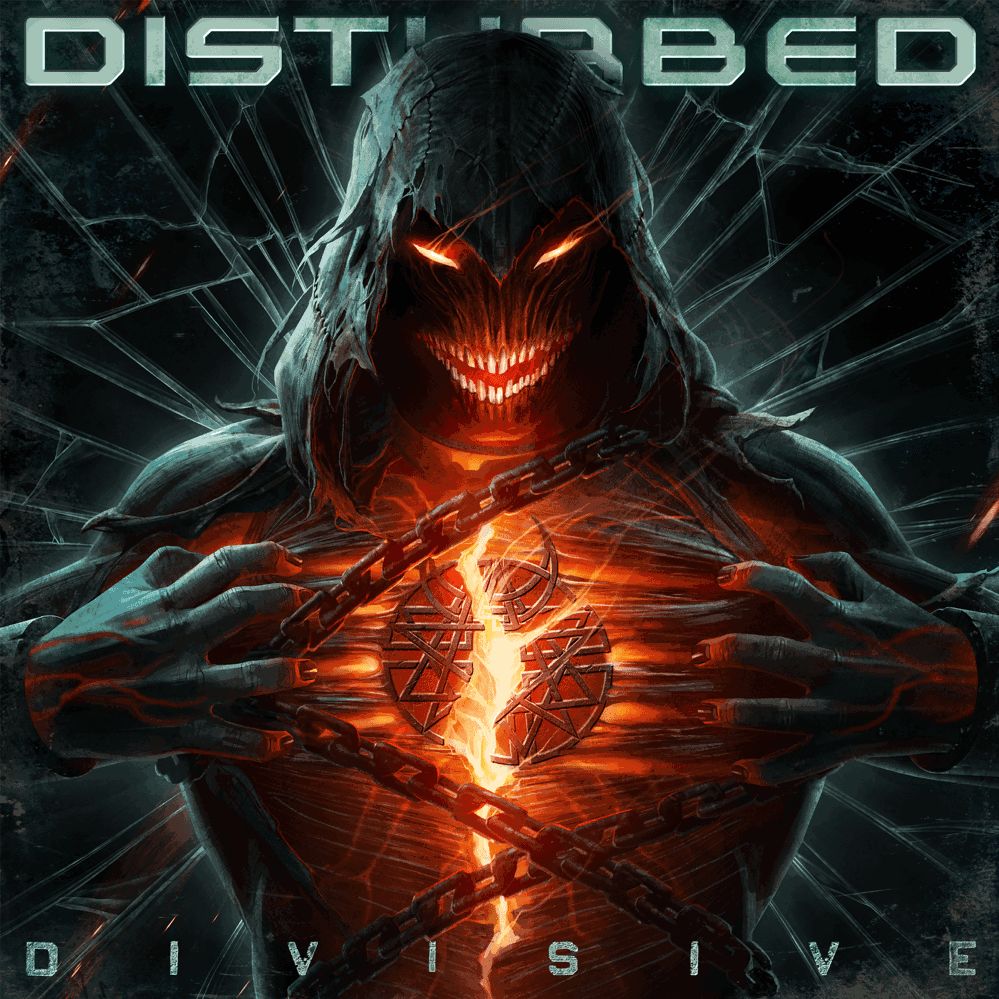 A hideous creature of some sort can be seen caught in a web but does not seem bothered because it is going to tear itself apart anyway, just like it is illustrated in the art. As it tears through its skin and the binding chains, there’s an eerie smile playing on its face as it peers at you with haunting eyes. Talk about going out with a real bang.

The band’s year began with the jaw-dropping lead single, “Hey You,” which made waves all over the world. The album’s lead single doubles as its first track. The tuning on the song transports you back to the early 2000s, and legendary vocalist David Draiman provided the screams and growls, which were incredibly beyond reviving.

Without exaggeration, “Bad Man” sounds like a single from Indestructible from 2008. Guitarist Dan Donegan launches into a chuggy and upbeat groove right away, transporting you back about fifteen years, without of any glitzy introduction. While Draiman switches back to a chorus with a lot of melody, his vocal delivery stays unprocessed, just like on the singles, keeping the heavy Disturbed flavor. It feels like a victorious come back.

The first two tracks are followed by the singles “Divisive” and “Unstoppable,” both of which have the same powerful energy and consistent hint of “rugged.” The hard rock and heavy metal communities were drawn to their early records because of their “rugged” approach, and they are demonstrating that even in 2022 they still have it. Both of these songs use contemporary production and a new perspective while recycling some of the core sounds from the preceding era. At this point in the record, it’s debatable whether there is anything unfavorable to say.

Before the album starts to change, “Love to Hate” serves as sort of the capstone to a succession of succeeding five-string songs that tap into Disturbed historical style. The more pure vocal and somewhat higher pitched sound are back in this song, which is where the old and the new collide. Draiman expresses dissatisfaction about the current political chasm in our country through the poetic channeling of his Twitter character. This song is most likely the band’s happiest work in between eras.

Ann Wilson from Heart is featured on “Don’t Tell Me,” and if you enjoy rock ballads by Disturbed or even Nita Strauss’ song “Dead Inside” with Draiman, you’ll enjoy this song, especially with Donegan beautifully shredding. With the exception of one of Draiman’s infrequent “OW”s, which is nice to hear, “Take Back Your Life” sounds like a deep-cut filler track. It’s not bad, but it also doesn’t offer anything particularly powerful or memorable. On this album, drummer Mike Wengren and bassist John Moyer display particularly strong energy, which helps to win the day.

The performance quality of “Part of Me” is only average. With Draiman having honed his gruff vocal style and effectively avoiding his more recent clean effort, there are undoubtedly the heavier aspects, but they are undoubtedly out of place with the album’s first three to four tracks. Disturbed’s 2022 album comes to a strong conclusion with the song “Won’t Back Down.” It’s an easy head-bang and leaves you with a good feeling in your mouth, with hints of prior songs Believe and Ten Thousand Fists leaking into the song structure.

David states that the album, Divisive, has two main themes: “partisan tribal warfare” and the negative consequences of a culture that has become “addicted to outrage.”

Load more
Tags
Disturbed
Ikedichim Chibundu Follow on Twitter November 19, 2022Last Updated: November 19, 2022
Check Also
Close
Back to top button
Close
We use cookies on our website to give you the most relevant experience by remembering your preferences and repeat visits. By clicking “Accept”, you consent to the use of ALL the cookies. In case of sale of your personal information, you may opt out by using the link .
Cookie settingsACCEPT
Manage consent