The guys have always wanted to look back and gather more inspiration, and the band has now embarked on a project that allows them to do just that. “This Machine Still Kills Fascists” is unlike anything the guys have ever done before. The album features lyrics by Woody Guthrie and is stripped down to its acoustic roots.

“This Machine Still Kills Fascists” also marks another significant change, as co-lead singer Al Barr’s absence from the band to care for his dying mother has resulted in Casey taking over all lead vocal responsibilities. Nevertheless, despite these distinctions, the album is a boisterous, rough-and-tumble affair. Still, it is distinctly Dropkick Murphys. 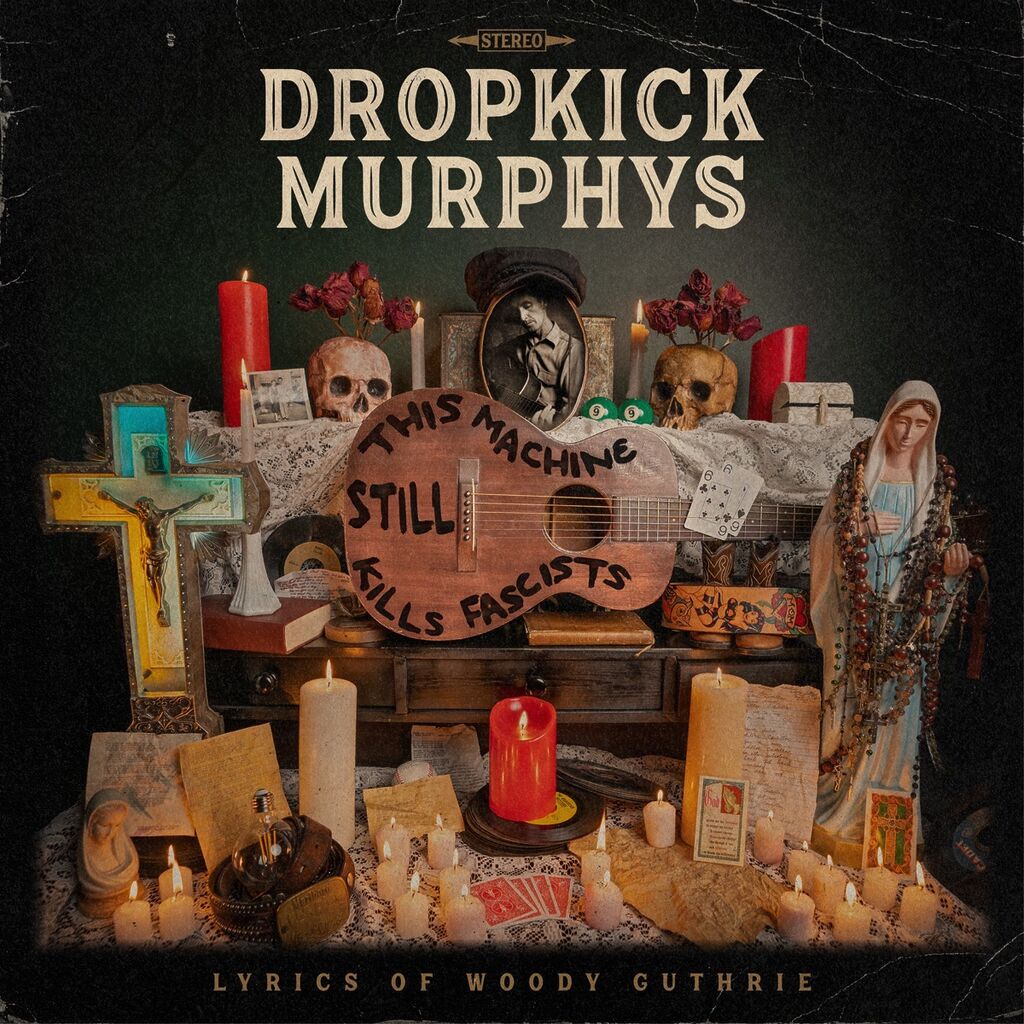 A religious altar of some sort, adorned with red and white candles of different heights and sizes, can be seen on the album cover but comes with a twist as different symbols signifying different things coexist alongside one another. However, in the centre of it all, there is a guitar, placed horizontally, on which the album title is boldly written on in dark ink. Quite cryptic but colorful if you don’t scare easy.

“Upside Down by Two 6” serves as the album’s first track. When you hear this song, the Johnny Cash influence is unavoidably one of the first things that comes to mind. Not merely Woody’s lyrics are out of date; whether on purpose or not, they could have been written by him today given how timely they are in light of the present political and social situation. It feels like a sweet little reference to how musicians would set up their instruments and arrangements in those earlier days. Additionally, it’s a wonderful little folk tune that tells a story, which is another area in which Guthrie always excelled.

The song “Talking Jukebox” features the “if these walls could talk” scenario but with a jukebox. It begins with a surf rock riff. You might be thinking to yourself, “boy, if this musical marvel here could talk, I wonder what it would say about everything that goes on in this bar,” as you observe people while this inert object is just sitting there all day and night. The music that is played actually accomplishes that exact goal.

“Ten Times More” has got to be one of the Murphy’s most original songs ever. The primary instrumentation, which is simply foot stomping, gives off a gritty, stripped-down vibe that is hard to resist. Literally. This song features only a harmonica and the sounds of stomping feet on a wooden floor; there is no percussion. This one would be interesting to see performed live.

The fourth song, “Never Get Drunk No More,” begins with a tin whistle, and the guys are starting to sound more like they do on previous tracks. Ken and singer-songwriter Nikki Lane collaborate on the song. It’s an old story about a guy promising to give up drinking forever to a woman who has heard it countless times. This tune can easily become a personal favorite from the album.

On “Dig a Hole,” the album’s final track, Cole Quest duets with the band’s front-man on ending fascism using a Smithsonian Folkways original Guthrie vocal tape and some excellent dobro playing from Cole, Guthrie’s grandson. The song accomplishes more than only acting as a strong closer to an excellent album. It demonstrates the concepts of Guthrie’s work have remained relevant throughout time.

Unabated political oppression and the struggles of working men and women persist. The powerful continue to ignore the plight of those in need. On the new album, Dropkick Murphys are still on the front lines of the struggle, much like Woody Guthrie.

The LP was produced & mixed by Ted Hutt.

Load more
Tags
Dropkick Murphys
Ikedichim Chibundu Follow on Twitter September 30, 2022Last Updated: September 30, 2022
Check Also
Close
Back to top button
Close
We use cookies on our website to give you the most relevant experience by remembering your preferences and repeat visits. By clicking “Accept”, you consent to the use of ALL the cookies. In case of sale of your personal information, you may opt out by using the link .
Cookie settingsACCEPT
Manage consent