Peyton Parrish’s “RIse of the VIkingr” album is infused with the heavy Metal-Rock type of Vibe, Chants and a few well collaborated features that does a good job of highlighting the themes that surrounds the Viking Life ,love, war , and family. 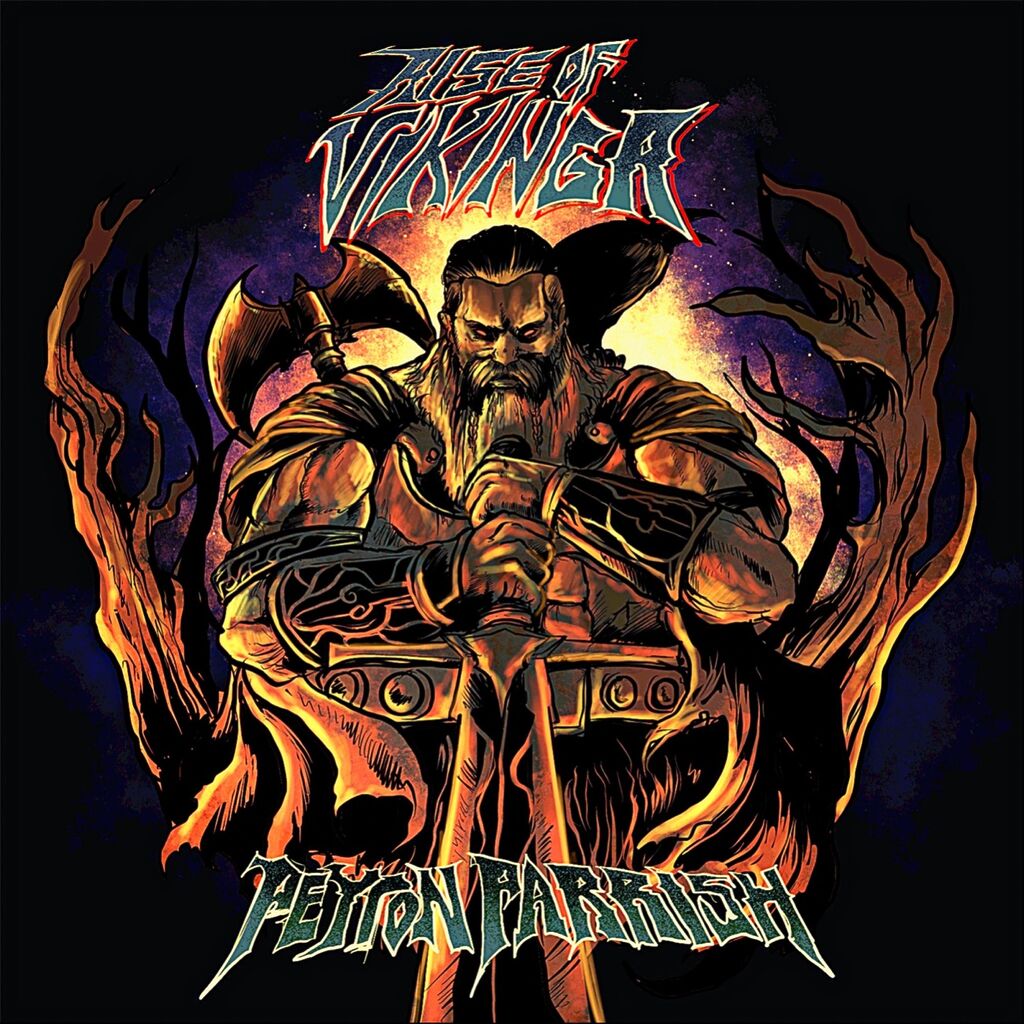 A huge man with the physical appearance of a warrior, an angry one at that, is seen crouched between two tall but dead trees. After taking a good look at Mr. Warrior’s demeanor, the big axe etched to his back and his drawn sword, it starts becoming clearer that the man is pumped, locked and loaded for battle and is ready to ride hard and ride out adorned with pride from the number of enemy heads rolling in his honor. That same energy was carried into creating the album, “Rise of Vikingr.”

The 16-track album opens with “Bardagi,” a typical viking-type track that has chants, heavy bass and drums, sonorous background vocals embedded in between viking lingua, and gives the listener the feeling of being set in a Norse era. Indeed, Fans of vikings stories and movies would smile when “Bardagi” comes on. The lone Wolf and Peyton go all in on the next track, “Dane.” It is a Hard Rock sound with catchy lead and bass lines and seems to drive towards the themes of War and being Viking.

The next feature, “Helgafjell,” sees Peyton collaborate with David Micheal Frank on this ‘smooth’ track that retains the rock elements while embedding silky background vocals into it. The lyrics “our bodies burn” and “our kingdom falls” suggest a war or post-war era, hard to pick one. “Draugr” also follows the Viking-war song sequence that talks up Viking bravery and conquest. Viking song fans will indeed soak up the sound.

“My Mother Told Me” has Peyton riding the wave of the beat as he reveals a mother’s advice and encouragement to her son. “Cyka Blyat” starts off with strong rock intros and viking chants that eases into Peyton’s rich tenor vocals bringing the track life. “Berserker,” “Dansa,” and “Wahnsinn” has Peyton laying vocals on hard and stringy rock intros and riotous beat sequencing, while giving lyrics that hint on viking bravado and victory.

“For The King” begins with chants and slides into deep vocals on smooth rock instrumentals that gives off the impressions of Viking Love with lyrics that agree with the theme too. “Curse of Evil” sees Peyton lay down lyrics that hint on a rise against evil and its ripple effects in typical Rock sound manner.

Peyton features Rachel Hardy and Mia Asano in “I’ll See You Again.” With a sonorous beginning, the track introduces the theme of love and sees the three artists do a great job on the vocal arrangements and song structuring. Painting the picture of a love that is being tested, the lyrics assisting the listener in creating an even more vivid mental picture. “Survive” is a song of hope that hints at survival against all odds and anticipating better outcomes.

Peyton’s rich tenor is heard on “The Viking Tale” and its lyrics contain the typical viking folklores on well laid-out beat sequencing. Coming as the last track on the album, “Battle of York” reverts to the war theme and the chase for victory, all the while hinting at the Vikings as war-ready people that will always tear through, conquer and plunder.

Love, war and the pursuit of victory.

The producers that worked on the album are not yet known, as that information has not been made known or official.

Tags
Peyton Parrish
Ikedichim Chibundu Follow on Twitter August 31, 2022Last Updated: August 31, 2022
Back to top button
Close
We use cookies on our website to give you the most relevant experience by remembering your preferences and repeat visits. By clicking “Accept”, you consent to the use of ALL the cookies. In case of sale of your personal information, you may opt out by using the link .
Cookie settingsACCEPT
Manage consent