Beyoncé typically prefers to keep her personal affairs out of the spotlight, but on Monday, August 8, the “Partition” singer gave fans multiple insights into how she’s been celebrating the release of her RENAISSANCE album.

The event was held in the Paradise Club in New York City, which was appropriately transformed into a Studio 54-inspired dance party to perfectly watch the new album’s dance and disco themes. A few behind-the-scenes photos and videos were posted on Queen B’s Instagram account yesterday.

She is visible in one of the photos wearing tights underneath a sparkly long-sleeve bodysuit. Her famed curves were highlighted by the dress’ plunging neckline, which also included stylish gloves. In a picture of the famous couple posing in front of an elevator near the end of the first photo dump, Hov is as dashing as ever wearing a white suit and sleek black shoes.

However, the couple became a little more close in her following upload. On slide three, they can be seen entering the celebration hand in hand as Beyoncé beams broadly.

Tags
Beyonce Jay-Z
Ikedichim Chibundu Follow on Twitter August 10, 2022Last Updated: August 10, 2022
Check Also
Close
Back to top button
Close
We use cookies on our website to give you the most relevant experience by remembering your preferences and repeat visits. By clicking “Accept”, you consent to the use of ALL the cookies. In case of sale of your personal information, you may opt out by using the link .
Cookie settingsACCEPT
Manage consent 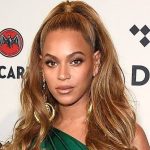