The 94th Academy Awards, streamed live from Downtown Los Angeles’ Dolby Theatre, was off to a great start as superstar athlete sisters Serena and Venus Williams introduced and made welcome the first performer of the evening in the person of the one and only Beyoncé.

According to reports from TMZ, the mother and singer took viewers to a Compton tennis court, also the same place where the champion tennis-playing duo first started years ago, to perform “Be Alive”. The track also makes an appearance on the soundtrack of the film, King Richard, which was also up for an Oscar award.

The film stars prolific actor, Will Smith as Richard Williams, and has earned Queen Bey an Oscar nom for Best Original Song. As she gave the audience a beautiful performance, she was surrounded by a talented and colorful group of dancers, which also included her own daughter,10-year-old Blue Ivy Carter.

And if there is anything we know so far about Blue, it’s that she is the thunder stealer. She shows up and effortlessly captures all attention. When she is out and about with any one or both of her parents, she just makes them almost invisible with her cute, childlike aura.

Tags
Beyonce Blue Ivy Carter
Ikedichim Chibundu Follow on Twitter March 28, 2022Last Updated: March 31, 2022
Check Also
Close
Back to top button
Close
We use cookies on our website to give you the most relevant experience by remembering your preferences and repeat visits. By clicking “Accept”, you consent to the use of ALL the cookies. In case of sale of your personal information, you may opt out by using the link .
Cookie settingsACCEPT
Manage consent 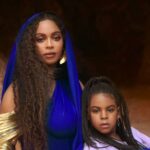