Nipsey Hussle’s friends and peers have been coming forward with stories about the Los Angeles rapper ever since his tragic death. Boosie Badazz recently opened out about his bond with Nipsey Hussle in an interview with Vlad TV, describing how the late rapper frequently looked after him whenever he visited Los Angeles.

Boosie said, “Nip was my boy,” adding that Nipsey routinely provided him with drivers and black vehicles for his trips all through the West Coast. “Nip kind of protected me out here! He kind of went out his way to make sure I was safe when I was out here.” Boosie stated that Nipsey Hussle and his relationship had little to do with music because they were both business-minded people. Boosie also spoke about one of their final exchanges.

View the complete footage below.

Tags
Boosie Badazz
Ikedichim Chibundu Follow on Twitter July 7, 2022Last Updated: July 7, 2022
Check Also
Close
Back to top button
Close
We use cookies on our website to give you the most relevant experience by remembering your preferences and repeat visits. By clicking “Accept”, you consent to the use of ALL the cookies. In case of sale of your personal information, you may opt out by using the link .
Cookie settingsACCEPT
Manage consent 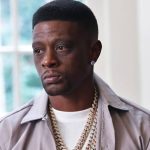