Coi Leray has always had reason to be in the news for some weeks now, and it’s only right seeing as her debút album, Trendsetter, would be unleashed upon the world this weekend, April 8th precisely, as announced in an Instagram post late last month.

The album announcement came not too long after she had released one of the biggest songs in hip-hop right now, with the assistance of the barbie queen herself, Nicki Minaj. The single also came with a complementing visual that is still raking in the views in their millons.

She also shared the album’s cover art and tracklist which showcases some powerful features including G Herbo, Lil Tecca, Pooh Shiesty, Young M.A, Fivio Foreign, Nav, H.E.R., and some more. But in view of the upcoming project, Leray shared a snippet of a track in which she laments over her personal struggles being faced behind the scenes.

“They can’t even see that I’m hurtin’ / Man I swear to god I hope its worth it,” she sang. “Stab me in my back carry this pain on my shoulders / Poppin’ all these pills but the Perc is just not workin’ / Couple more of these shots gon’ turn me into a new person,” rapped Coi in the short teaser.

Overwhelmed… so ima vent (for my fans only) pic.twitter.com/Az1dtvH21K

Tags
Coi Leray
Ikedichim Chibundu Follow on Twitter April 5, 2022Last Updated: April 5, 2022
Check Also
Close
Back to top button
Close
We use cookies on our website to give you the most relevant experience by remembering your preferences and repeat visits. By clicking “Accept”, you consent to the use of ALL the cookies. In case of sale of your personal information, you may opt out by using the link .
Cookie settingsACCEPT
Manage consent 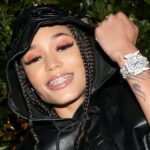