Drake staged yet another unusual collaboration this week when he appeared at Toronto’s HISTORY nightclub with Nelly Furtado after performing with the Backstreet Boys in the city last month.

But the unexpected presence of British Columbia’s Furtado, who sang Promiscuous Girl and I’m Like A Bird, had fans giddy on social media.

drake and nelly furtado singing i’m like a bird together.. this is canadian history pic.twitter.com/KhIh5qan20

“I don’t care how loud you sang tonight — right now I need you to sing as loud as you possibly can, because this right here, took a lot. This next person’s changed my life so much, I love her so much,” he continued.

Tags
Drake Nelly Furtado
Ikedichim Chibundu Follow on Twitter August 2, 2022Last Updated: August 2, 2022
Check Also
Close
Back to top button
Close
We use cookies on our website to give you the most relevant experience by remembering your preferences and repeat visits. By clicking “Accept”, you consent to the use of ALL the cookies. In case of sale of your personal information, you may opt out by using the link .
Cookie settingsACCEPT
Manage consent 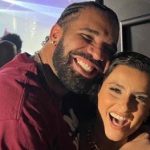