Today, Los Angeles rapper Joe Moses teamed up with acclaimed R&B singer Jeremih on the song “Freak It,” closely following his viral appearance on Verzuz. The duo show off their synergy on a track produced by DJ Battlecat, the legendary beatmaker behind Kurupt’s “We Can Freak It.” 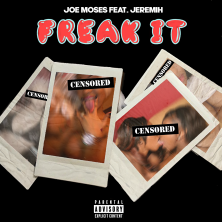 Joe, who’s no stranger to collaborating with other artists, returns with his second effort released this year as a friendly reminder that gangstas need love, too. On “Freak It,” he pays homage to Kurupt with an interpolation of his classic track, possessing all the ingredients of a summer anthem that’s guaranteed to make listeners hit the dance floor.

When speaking about the inspiration behind “Freak It,” Joe shares: “‘Freak It’ is one of the best songs in West Coast history. Battlecat’s help made the updated version of the song with Jeremih a new classic.” And if there’s one thing Joe Moses knows, it’s the essential features of a hit record. He’s played an instrumental role in composing some of the biggest songs to come out of the West Coast, despite not getting the credit he rightfully deserves as an accomplished songwriter.

Throughout his storied career, Joe has always been available to lend a helping pen. Most recently, he secured a placement on Chris Brown’s tenth studio album, Breezy, flexing his skills as a composer on the song “Dream.” With a new project due for release this year, fans have been rewarded with a sneak peek of what Joe describes as a wake up call: “I think they sleep on me.”

As anticipation for new music rises, and while most movements are fleeting as soon as they arrive, Joe Moses is here to stay, cementing himself as one of the foremost culturally relevant MC’s in the game.

Listen to “Freak It”