Some profound discussions and relatively common scenarios are certain to come up on Kevin Hart’s Hart to Hart on Peacock. Rapper Saweetie said that she is proud of her “food concoctions” when the Philly comedian questioned her about her unusual meal pairings and eating habits.

The most well-known of Saweetie’s inventions is the meal she created in partnership with McDonald’s. It included her “Sweetie ‘N Sour” sauce, a Big Mac, four-piece chicken nuggets, fries, and a Sprite. This is consistent with her odd eating habits, which include eating spaghetti with ranch dressing and oysters with barbecue sauce, which even drew Lizzo’s attention as a potential culinary Verzuz.

Kevin Hart was particularly interested on how she felt about eating her creations in public throughout the interview.

Jokingly, he said: “It’s Hart to Hart, this is me and you talking honestly. You gotta have crazy gas, eating some of this stuff, right? Let’s just keep it 100 for a second. It’s no way that your system is that strong.”

Hart’s statements had Saweetie laughing and chuckling, but she kept her guard up and declared, “I got a stomach of steel.” The 43-year-old comic yelled, “It has to be!” Saweetie joined him in a roaring laughter.

View the complete Hart to Hart episode down below.

Tags
Kevin Hart Saweetie
Ikedichim Chibundu Follow on Twitter August 9, 2022Last Updated: August 9, 2022
Check Also
Close
Back to top button
Close
We use cookies on our website to give you the most relevant experience by remembering your preferences and repeat visits. By clicking “Accept”, you consent to the use of ALL the cookies. In case of sale of your personal information, you may opt out by using the link .
Cookie settingsACCEPT
Manage consent 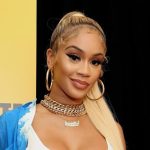